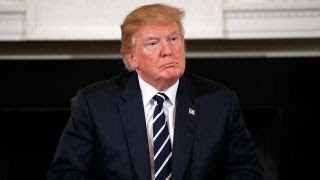 We're headed for a separation of powers showdown between Congress and the president that will ultimately end up in the Supreme Court.

The Constitution gives Congress the "sole Power of Impeachment." Yet President Donald Trump has ordered all of his current and former senior advisers to defy congressional subpoenas to testify in the impeachment inquiry. Trump is claiming the subpoenaed witnesses have "absolute immunity" against civil or criminal liability for refusal to provide testimony. However, "absolute immunity" is a creation of the Department of Justice's Office of Legal Counsel. No court, statute or constitution has ever recognized it.

Some subpoenaed witnesses have obeyed Trump's command and refused to testify. But others have defied him and testified before the committees of the House of Representatives gathering evidence during the impeachment process.

The committees are investigating a July 25, 2019, phone call between Trump and Ukrainian PresidentVolodymyrZelensky. In that call, Trump made $400 million in military aid, Javelin missiles and a meeting between the two presidents all contingent on Zelensky investigating the 2016 hacking of the Democratic National Committee and digging up dirt on Joe Biden and his son, Hunter.

In his complaint, Kupperman asked the U.S. District Court for the D.C. Circuit to resolve the conflict between the legislative and executive branches and decide whether he must testify.

On October 26, Schiff, Engel and Maloney sent a letter to Kupperman's lawyers, stating that the subpoena was still in force and the committees would consider Kupperman's "defiance of a congressional subpoena as additional evidence of the President's obstruction of the House's impeachment inquiry." Such defiance, they wrote, "may also cause the Committees to draw an adverse inference against the President, including" that Kupperman's "testimony would have corroborated other evidence ... showing that the President abused the power of his office by attempting to press another nation to assist his own personal political interests, and not the national interest."

"If such an abuse of authority by the President to muzzle current and former officials from disclosing to Congress evidence of his own misconduct were to stand, it would inflict obvious and grave damage to the House's capacity to carry out its core Article I functions under the Constitution, including its impeachment inquiry into the President's actions. This would fundamentally alter the separation of powers that forms the bedrock of American democracy."

On November 6, concerned about the delay Kupperman's lawsuit would cause, the House of Representatives withdrew the subpoena. The House suggested that Kupperman abide by the decision in a pending lawsuit against former White House counsel Don McGahn. The McGahn litigation will, in all likelihood, resolve Kupperman's dilemma about whether he is legally bound to testify.

The same legal issues Kupperman raised are at issue in a suit filed by the House Judiciary Committee to enforce its April 22 subpoena of McGahn to testify before Congress about efforts by Trump to obstruct Special Counsel Robert Mueller's Russia investigation. In its complaint, the Judiciary Committee said McGahn was "the most important witness, other than the president, to the key events" that could form the basis for obstruction of justice by Trump. McGahn told Mueller that Trump ordered him to fire Mueller. When McGahn threatened to resign, Trump backed down. After Trump's firing order became public, Trump tried to get McGahn to falsify evidence and deny it had happened.

Citing the Office of Legal Counsel's position that a sitting president cannot be indicted, Mueller did not conclude whether Trump committed obstruction of justice, although he set forth 10 possible grounds for obstruction. The Mueller report said that if the Special Counsel's office "had confidence after a thorough investigation of the facts that the President clearly did not commit obstruction of justice, [it] would so state." Mueller left it to Congress to address Trump's obstruction of justice through the impeachment process, stating that the "Constitution requires a process other than the criminal justice system to formally accuse a President of wrongdoing."

During the October 31 oral argument in the McGahn case, U.S. District Judge Ketanji Brown Jackson appeared highly skeptical of the White House's claim that current and former top presidential advisers have absolute immunity from congressional subpoenas. Jackson said she would issue a ruling as early as possible.

Related Topic(s): Subpoena Contempt; Testify; Trump Against Democracy; Trump Claims Innocence; Trump Judges, Add Tags
Add to My Group(s)
Go To Commenting
The views expressed herein are the sole responsibility of the author and do not necessarily reflect those of this website or its editors.