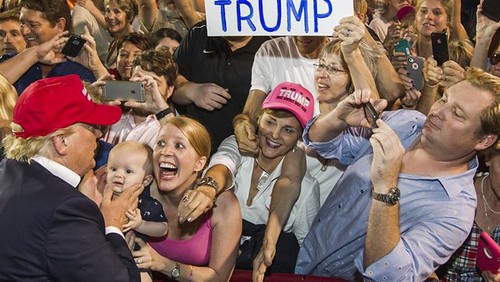 From the beginning, amateur shrinks have attempted to psychoanalyze Trump from a distance. Verdict: "The Dark Triad" = narcissism, Machiavellianism and psychopathology. What's new here is a focus on the codependent relationship between the adoring followers and the self-aggrandizing leader. While opiate addiction get's all the headlines, America's greatest addiction is codependency.

Trump's dysfunctional mind-set ironically gives him keen insight on understanding this ubiquitous pathology and he is a savant in manipulating that dynamic in the same way casinos program betting machines to engage people's neural pleasure centers-giving them false hope that nirvana is not far off.

It is not unusual for Presidents to be labelled narcissistic; after all it takes a lot of chutzpah to run for the top job in the land. Moreover, many candidates with more polarizing rhetoric than Trump, have tried and failed to get the coveted job. What is it about "Trump's brand of narcissism" that has resonated with so many people? The answer lies in Trump's co-opting of the basic tenets of Addiction 101: Family Systems Theory(FST), Codependency and its extension to Collective Codependency.

While many feel he is an unscripted box of rocks, he actually is running a pristine addiction template by utilizing a group extrapolation of FST to form an aberrant social engineering model. While he might appear to be the Oval Office's version of the empty suit, his management template is similar to the aforementioned slot machine programmed to give you enough dopamine (with the near hits or near misses) to obscure your executive function-which temporarily cleans you out and you willingly reload while he is emptying out the machine-leaving you hungering for more until he presses the reset button and the circle of fraud continues.

Before I elucidate on "Trump's Addiction Machine" it is important to discuss the FST operating system it runs off of. FST was developed by Dr. Murray Bowen in the 1950's as a means of looking at the family dynamic as one emotional unit whose health was affected not only by each individual, but more importantly a sum of its whole. Consequently in analyzing eight universal characteristics of the family structure and its application to individual families he unearthed the widely accepted notion that when one individual is out of sync, the family's homeostasis is affected.

Although Dr. Bowen and his cohorts brilliantly deciphered a broad based paradigm in examining the family unit, it was not until decades later that the monikers "dysfunctional family" and "codependency" emerged as ubiquitous phrases in pop psychology for quantifying the distinction between a healthy family and a unhealthy unit using a group addiction model. Simplistically, for this paper's intent, codependency is used to measure the functionality of the family (or larger group) based on three variants: boundaries, communication and attachment.

A thriving family has permeable boundaries supporting authentic communication inside and outside the family system. A dysfunctional family: has rigid boundaries with unhealthy enmeshment that is born out of unprocessed trauma, that conflates with unconscious shame to become an incestuous secret to be hidden at all costs. Usually it takes place in a triangular context: with the authoritarian family leader forming a vacuous center that requires narcissistic devotion by means of enablement by the secondary players to protect their unconscious shame; this group machination is called "codependency".(The phrase "codependency" originated from AA, but authors like Melody Beattie have eloquently given it a ubiquitous place in FST lexicon)

Anybody who has spent some time in Alanon and/or ACOA (Adult Children of Alcoholics) will tell you that unprocessed grief or trauma can be the launching pad for addiction; and if left untreated can hijack the whole family into a toxic dance to distort reality. In essence, whether you are the primary mover or codependent enabler, the whole family system becomes a malignant process to sublimate the truth. The repercussion: everyone in the system takes on the trauma and resultant shame by default; and each player now is acting with an addict's mindset, being drawn to unhealthy attachments that will blot out their real feelings. Putting it bluntly, they are now primed to be taken on "Trump's Magical Mystery Tour".

Trump is a savant in using his keen understanding of this dysfunctional group dynamic that he learned growing up in a home devoid of love. Unfortunately, Trump's hurt was so large, to paraphrase Dr. Joseph Frank: "he never learned to process his trauma in a repairative way; and long ago jettisoned his conscious and became addicted to narcissistic supply to offset his disenfranchised grief."

It is not that Trump's inferiority complex developed in childhood is unusual, as the late great codependency guru, John Bradshaw was fond of saying: "we all grew up as wounded children". Furthermore, a cursory view of twentieth-century theorists, specifically the work of Albert Adler suggests: "that whether by nature or nurture a small minority never become integrated and overcompensate for their inferiority by developing what Adler called a "superiority complex".

Later on, channeling the work of Adler and many developmental theorists before him, Heinz Kohot defined similar symptomatically as Narcissistic Personality Disorder (NPD), which was officially adopted as an APA diagnosis in 1980. It is broadly understood that a small percentage of the general population become hardwired for hate and spend perpetuity in the stage of Infantile Megalomania or the adult version called (NPD). This is Trump's Reality! NPD as defined by the DSM5 (the APA diagnostic bible) as having at least 5 tenets on a 9 point clinical narcissism scale, and if you have all nine (which thousands of clinicians agree Trump has) then you view life from a psychopathic prism of chasing after your childhood insults, like a compulsive gambler, to compensate for that void regardless of any ethical concerns.(DSM5, 2015)

In street vernacular this is played out in a streaming dialogue in Trump's mind that probably is akin to: "since I got no love as a child it is my right to screw everybody over; rules do not apply to me"

But do not be misled to believe Trump's blunted emotional development reflects a larger cognitive deficit, on the contrary, his ability to spawn multiple fantasies delivered in a myriad of creative machinations reflects a fluid brain. Yes it is deviant, but it shows sophisticated (skewed) logic in its use of rationalizations, such as Ad Hominem and Straw Men fallacies: to impart pseudo tautologies that are deftly masked by his charisma to connect with those in his wheelhouse-folks who project their untreated trauma in the form of vitriol to any group they secretly envy.

Consequently, President Trump's M.O. for gaining power is: projecting his anger from his unresolved insults onto a slice of the electorate that is overflowing with similar wounds. So as thoughtful theorists grapple with the question: why his electorate has remained loyal to him despite his wayward actions? The answer lies in: Trump's keen understanding of dysfunctional families and his ability at harnessing that construct, into a larger group phenomena I call, collective codependency.