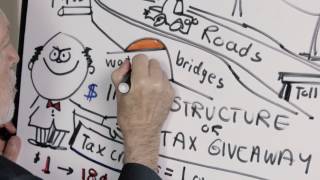 At a round-table discussion with state transportation officials on Friday, Donald Trump said America's aging roads, bridges, railways, and water systems were being "scoffed at and laughed" at. He pledged that they "will once again be the envy of the world."

This seems to be a core theme for Trump: America's greatness depends on others envying us rather than scoffing and laughing at us.

To be sure, America is in dire need of massive investments in infrastructure. The nation suffers from overflowing sewage drains, crumbling bridges, rusting railroad tracks, outworn roads, and public transportation systems rivaling those of third-world nations.

The American Society of Civil Engineers, giving America's over-all infrastructure a grade of D-plus, says we would need to spend $3.6 trillion by 2020 to bring it up to par.

The problem isn't that we're being laughed at. It's that we're spending hours in traffic jams, disrupted flights, and slow-moving trains. And we're sacrificing billions in lost productivity, avoidable public health problems, and increased carbon emissions.

But what Donald Trump is proposing won't help. It's nothing but a huge and unnecessary tax giveaway to the rich.

His "$1 trillion infrastructure plan," unveiled last week, doesn't amount to $1 trillion of new federal investment in infrastructure. It would commit $200 billion of federal dollars over 10 years, combined with about $800 billion of assorted tax breaks to get developers to build things instead of the federal government doing it.

And it's hardly a plan. It's not much more than a page of talking points.

Worse, its underlying principle is deeply flawed. It boils down to a giant public subsidy to developers and investors, who would receive tax generous tax credits in return for taking on the job.

Which means the rest of us would have to pay higher taxes or get fewer services in order to make up for the taxes the developers and investors would no longer pay.

For example (in one version of the plan I've come across), for every dollar developers put into a project, they'd actually pay only 18 cents -- after tax credits -- and taxpayers would contribute the other 82 cents through their tax dollars.

No one should be surprised at this scheme. It's what Trump knows best. After all, he was a developer who made billions, often off sweeteners like generous tax credits and other subsidies.

The public would also pay a second time. The developers would own the roads and bridges and other pieces of infrastructure they finance. They'd then charge members of the public tolls and fees to use them.

Related Topic(s): Donald Trump Lies; Infrastructure; Scam Artist, Add Tags
Add to My Group(s)
Go To Commenting
The views expressed herein are the sole responsibility of the author and do not necessarily reflect those of this website or its editors.