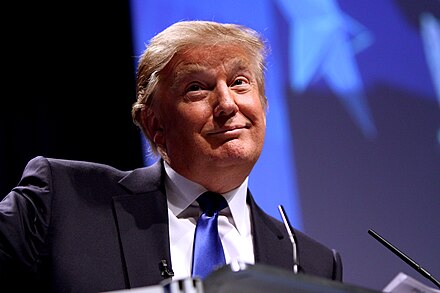 Part I -- Trump and the Constitution

It is a pretty sure thing that President Donald Trump is ignorant of what is in the U.S. Constitution and, in any case, does not care much about what the document says. Take the idea of freedom of speech as set down in the First Amendment. Does he understand the importance of this amendment? Actually, it would seem that the only freedom of speech he finds sacrosanct is his own, expressed almost daily in angry, often rambling "tweets." Those frequent missives hardly make the man a model of critical thinking and, as it turns out, for the price of some special interest's political support, President Trump is willing to tell us all that we must believe the opposite of what is true. If we don't, he will take away some federal benefit. Trump is by nature both authoritarian and simple-minded -- not an unusual combination.

It was in this simplistic frame of mind that, on 12 December, President Trump issued an executive order directing the federal government to deny funds to universities and colleges that allow alleged anti-Semitic speech on campus. Well, the reader might respond, such an order is understandable because we know that anti-Semitism is a particularly vicious form of racism. And so it is. The mistake here is to assume that President Trump actually knows how to recognize genuine anti-Semitism, so as not to confuse this expression of bigotry with its opposite: the support of human, civil and political rights -- in this case, those of the Palestinians. Now, the reader might ask, how could anyone confuse these two categories: on the one hand, the support of an oppressed people's rights and, on the other, racist anti-Semitism? It helps if you are ignorant, amoral and opportunistic.

And so, with the encouragement of the Zionist lobby, a particularly powerful lobby dedicated solely to the interests of the Israeli state, President Trump, who is in fact ignorant, amoral and opportunistic, based this executive order on a logical fallacy -- a category mistake. He identified protests against Israeli state behavior with anti-Semitic racism and declared that any university or college that allows the former (say, by permitting criticism of Israel for its violent suppression of Palestinian rights) is to be found guilty of the latter (anti-Semitism), and therefore is not to receive federal funds.

Working for the purposeful confusion of anti-Semitism and the support for Palestinian rights is a Zionist project. It should be emphasized that the Zionists who carry this project forward are not, like the president, ignorant or confused. They know what they are doing. And that is why this effort constitutes a tragedy of the highest order not only for the Palestinians, but for the Jewish people as well.

After World War II every sane individual knew that racism, particularly racism expressed through state power, was bad news. The consequences of such empowered bigotry was there to see across the world: Japanese behavior in China, Korea and Southeast Asia generally, along with German behavior throughout occupied Europe, constituted the worst examples. They resulted in the deaths of tens of millions -- among them six million Jews. That is why as early as the late 1940s, an expansion of international law and the United Nation's Universal Declaration of Human Rights sought to make such behavior criminal, particularly when carried out as the policy of governments.

As it turned out, those resolutions constituted direct obstacles to the Zionist goal of a "Jewish state" in Palestine. The Zionist conquest of Palestine in the military campaigns of 1948 and 1967, was followed by the systematic narrowing or outright denial of the human, civil and political rights for Palestinians. In the case of Palestinians residing in Israel proper, the racist policies and practices were often obscured behind a facade of benign-sounding declarations that, more often than not, had little impact on minority rights. No such facade was adopted within the Occupied Territories. In this way racism became an essential tool for achieving Zionism's goal of ethnic exclusivity.

So how do you rationalize this behavior? Even though Ashkenasi (that is, European) Jews have been one of the most persecuted groups in Western history, it was not hard for the Zionists to see their own racist behavior as necessary. Founding a state first and foremost for one group, in a territory already occupied by hundreds of thousands of "others," easily led to discriminatory policies and practices. It also led to indoctrination of Israeli Jews and their diaspora supporters through the distortion of the history of conquest and colonial occupation. The inevitable resistance of the Palestinians, even when non-violent, became labeled as lawlessness at best and terrorism at worst. In this sense, Israeli society has mimicked not only the apartheid sentiments of South Africa, but also the culture that prevailed in the United States before the Civil Rights Movement of the 1960s.

Yet it was not enough for the Israelis to convince their own Jewish citizens that Zionist racism was righteous self-defense and support of Palestinian rights the equivalent of anti-Semitism. This logical fallacy had to be pushed on Israel's primary ally, the United States. And, at least in the halls of power, this effort has been remarkably successful, probably because the Zionist lobby has a lot of money to help or hinder ambitious American politicians.

However, outside of those halls, the effort has been exposed for what it is: a dangerous reversal of categories that threatens to turn the clock back on much of the post-World War II progress in political, civil and human rights. As the growing popularity of the boycott Israel movement (BDS) has shown, American citizens, both Jewish and non-Jewish, have an increasing ability to see the reality of the situation. A survey released in mid June 2017 by an organization known as the Brand Israel Group, "a coalition of volunteer advertising and marketing specialists" who consult for pro-Israel organizations, indicated that "approval of Israel among American college students dropped 27% between the group's 2010 and 2016 surveys" while "Israel's approval among all Americans dropped 14 points." Brand Israel's conclusion: in the future, the U.S. may "no longer believe that Israel shares their values." This is the case not because of any big increase in anti-Semitism, but due to ever-growing evidence of Israeli racism.

One reaction to this increasing popular clarity of vision is President Trump's executive order. If, in this case, colleges and universities do not enforce the Zionist logical fallacy, they lose federal money.

Related Topic(s): Anti-semitic; Israel; Jews; Palestinian; Trump Bigotry; Trump Racist; Trump Signs Executive Order; Universities; Zionists, Add Tags
Add to My Group(s)
Go To Commenting
The views expressed herein are the sole responsibility of the author and do not necessarily reflect those of this website or its editors.