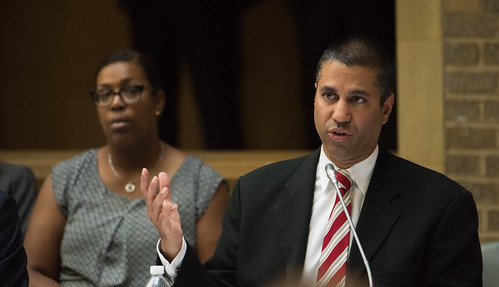 Let's be clear. The plan to end net neutrality is not about the just the net. The internet is the biggest power leveling factor in modern western industrial world history. The attack on net neutrality is an attempt to claw back all the power that the Bottom up nature of the internet has given to individuals, groups and non-state actors.

Eliminating net neutrality is a massive assault, perhaps the biggest in modern history, on the empowerment of people to voice their ideas.

Ajit Pai, the FCC appointee who is leading the way to end net neutrality talks about a "light touch."

I'm sure that when people started talking about legislating to protect children that there were voices like Pai's who argued against legislation because the market would resolve the problem.

RT @AjitPaiFCC: Today, I’m proposing to repeal the heavy-handed Internet regulations imposed by the Obama Administration and to return to t… at

I'm sure that there have been dishonest voices like Pai's who cited words like liberty and freedom to argue against women's rights to vote and equal treatment for people of all color. Ajit Pai is an enemy of freedom for 99% of humanity. He is leading the assault to take away the power that the internet has given to the people. He, by his attack on net neutrality, is helping every dictator, every authoritarian despot, every crooked corporate executive, every propagandist who wants to shut down opposing voices.

We need to make it clear to companies that plan to benefit from the ending of net neutrality that they will become the targets of boycotts.

We need to make it clear to the mainstream media networks that if they do not get behind defending net neutrality, one hundred percent, that they are, in reality allies of net neutrality attackers.

Email, call, write, tweet your messages to your legislators and to the mainstream media. Shame the POSPOTUS (piece of sh*t President of the United States) into turning this around.

Related Topic(s): Bottom-up; Feudalism; Net Neutrality; People Power, Add Tags
Add to My Group(s)
Go To Commenting
The views expressed herein are the sole responsibility of the author and do not necessarily reflect those of this website or its editors.

STAY IN THE KNOW
If you've enjoyed this, sign up for our daily or weekly newsletter to get lots of great progressive content.
Series: "Social Media, internet, Web, Smart Phone"