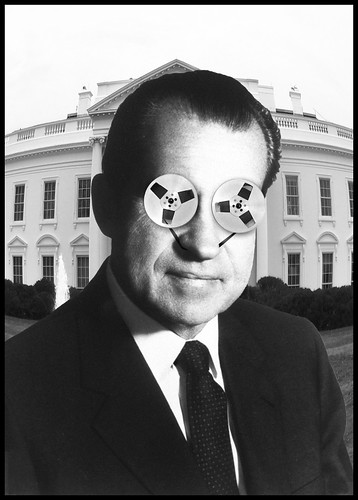 President Trump followers are faced with similar confidence conflicts as were followers of Richard Nixon during the Watergate investigations and ardent belief that President Nixon was totally innocent. The incident involved a break-in at Democratic Party headquarters based in the Watergate Hotel for the purpose of 'stealing' strategic campaign plans. The perpetrators were caught in the process, which in turn evolved into congressional investigations.

Trump followers will travel much of the same road as the Nixon followers did: Hold on to the belief of his innocence with the confidence that once all the facts and evidence was presented he will be absolved of any wrong doing.

President Nixon was innocent of planning, approving, or even knowing about the break in. His mistake, and crime, came after the incident came to light -- he aided and abetted in the cover-up and attempted to use the power of his office to stop the investigation conducted by the Department of Justice and its agencies plus attempting to influence the congressional investigation.

In advertising parlance, let's run this idea up the flagpole and see who salutes it. Trump, like Nixon, is innocent of the collusion between Russian officials and Trump campaign and Trump associates. Let's also believe that Trump has been told by his most trusted advisors that there is no truth or evidence tying them or any of the Trump campaign or White House staff to such activities. And accept that Trump has believed them.

President Trump's dangerous path is now the same one as President Nixon faced. Come clean, completely clean, or take the road of aiding and abetting and covering up the mounting evidence against such Trump affiliates, Paul Manafort, Gen. Mike Flynn, Roger Stone, and others who are under investigation by the FBI and will be called to testify by the Congressional investigative committee.

If President Trump decides to hold his ground because he has already taken some steps in that direction and his personality is such that he finds it nearly impossible to reverse his actions, and retract his damning false accusation against former President Obama, his administration will have a heavy cloud of suspicion and render his credibility as nonexistent. This course will lead to impeachment or at best his resignation.

President Trump's personality based on his bottomless narcissism makes him vulnerable to "damn the torpedoes, full steam ahead," not seeing the perilous consequences to his presidency with his continuous belligerent, "I am the president, you are not" defiant Twits, attitude and demeanor.

He refuses to even consider that things are not going well based on him, his words and treatment of others, not on his political enemies. He has become the master of the lie convincing himself that it is not a lie if he says it -- it only becomes a lie when others say it.

In his mind there is no defeat; there is betrayal and treason, but not of his doing or making. He failed to muster sufficient votes to pass one of his most ardent campaign promises --- repeal Obama Care -- but according to him -- it was the fault of the Democrats because they did not support him -- the President of the United States -- as they should have. He blamed factions of his own party and threatens them with what he believes is the ultimate punishment he can bestow on them -- he will oppose them for reelection.

So that even if he is innocent of the Russian connection under intense investigation and reporting, his supporting those around him that more and more evidence points to their involvement, his actions, words and threats heaped on members of his own party who will ultimately possibly be called on to vote for his impeachment may sway them to oust him.

Were this to take place, there is another threat to his future -- Vice President Pence, who would then ascend to the presidency, may not pardon him, as Gerald Ford did Nixon, as Pence is a Republican loyalist who may, along with party faithful, seek to teach Trump the ultimate lesson for his mistaking himself as omnipotent with the powers of emperor of the nation.

Former Editor of HispanicVista.com (2000 to 2010), a weekly online news magazine dealing with US-Mexico and Hispanic-American issues. Weekly columnist with HVC. Monthly columnist for the San Diego Metropolitan Magazine, The Connection, which (more...)

According to President Trump, former President Obama is another Nixon. Really?

The nation cannot allow a white-supremacist as Attorney General

The role of economic disparity as the cause in border crossings

Let's build a wall, hire more guards, spend more and fail again, because that's what we do best.