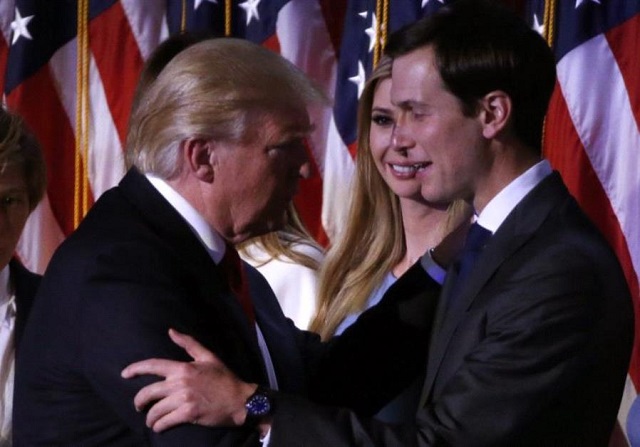 Trump's son-in-law Jared Kushner has been tasked with winning over Arab states particularly those in the oil-rich Gulf to stump up money for pacifying Palestinians and their neighbours
(Image by jpost.com)   Details   DMCA

The White House's prolonged financial bullying of the Palestinian Authority (PA), the Palestinians' government-in-waiting, has reached the point where there are now credible warnings that it is close to collapse. The crisis has offered critics further proof of the administration's seemingly chaotic, often self-sabotaging approach to foreign policy matters.

Meanwhile, US officials charged with resolving the Israeli-Palestinian conflict have demonstrated ever more blatant bias, such as the recent claims by David Friedman, the ambassador to Israel, that Israel is "on the side of God" and should have the "right to retain" much of the West Bank.

Again, critics view the Trump administration's approach as a dangerous departure from the traditional US role of "honest broker".

Such analyses, however common, are deeply misguided. Far from lacking a strategy, the White House has a precise and clear one for imposing a solution to the Israeli-Palestinian conflict President Donald Trump's so-called "deal of the century". Even without publication so far of a formal document, the plan's contours are coming ever more sharply into relief, as its implementation becomes observable on the ground.

Repeated delays in announcing the plan are simply an indication that Trump's team needs more time to engineer a suitable political environment for the plan to be brought out of the shadows.

Further, the Trump administration's vision of the future for Israelis and Palestinians however extreme and one-sided has wide, bipartisan support in Washington. There's nothing especially "Trumpian" about the administration's emerging "peace process".

Paradoxically, that was evident last week, when leading members of the US Congress from both sides of the aisle introduced a bill to boost the ailing Palestinian economy by $50m. The hope is to create a "Partnership Fund for Peace" that will offer a financial fillip to Israelis and Palestinians seeking to resolve the conflict or, at least, that is what is being claimed.

This sudden concern for the health of the Palestinian economy is a dramatic and confusing U-turn. Congress has been an active and enthusiastic partner with the White House in choking off aid to the PA for more than a year.

Mohammad Shtayyeh, the Palestinian prime minister, told the New York Times last week that the PA was on the brink of implosion. "We are in a collapsing situation," he told the newspaper.

The PA's crisis comes as no surprise. Congress helped initiate it by passing the Taylor Force Act in March 2018. It requires the US to halt funding to the PA until it stops paying stipends to some 35,000 families of Palestinians jailed, killed or maimed by Israel.

On the brink of collapse

Previous US administrations might well have signed a waiver to prevent such legislation from going into effect just as presidents until Trump blocked a congressional law passed in 1995 demanding that the US move its embassy to Jerusalem.

But the Trump White House is not interested in diplomatic face-saving or reining in the pro-Israel zealotry of US legislators. It fervently and explicitly shares the biases that have long been inherent in the US political system.

In line with the Taylor Force Act, the White House has cut off vital funds for Palestinians, including to UNRWA, the United Nations' refugee agency for Palestinians, and to hospitals in Israeli-occupied East Jerusalem.

The decision by Congress to throttle the PA has had further repercussions, leaving Israeli Prime Minister Benjamin Netanyahu exposed domestically. Not daring to be seen as less anti-PA than US legislators, Netanyahu implemented his own version of the Taylor Force Act earlier this year.

Since February, he has withheld a portion of the taxes Israel collects on behalf of the PA, the vast bulk of its income, equal to the stipends transferred to the Palestinian families of prisoners and casualties of Israeli violence or those who Israel and the US simplemindedly refer to as "terrorists".

Related Topic(s): Donald Trump; Jared Kushner; Trump Foreign Policy, Add Tags
Add to My Group(s)
Go To Commenting
The views expressed herein are the sole responsibility of the author and do not necessarily reflect those of this website or its editors.