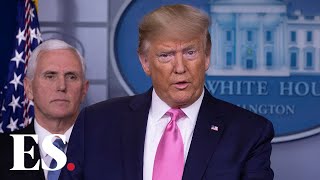 On Wednesday evening, Donald Trump held a press conference to announce how the United States would address the looming threat of the 2019 novel coronavirus. Trump's primary action was to place Mike Pence -- a man who not only directly intervened to help make an HIV epidemic in Indiana worse, but also wrote columns expressing doubt about the link between cigarettes and cancer -- in charge of the epidemic.

Why Pence? According to Trump, people with actual experience in the area were too busy. So apparently Pence will handle what could be the most pressing issue facing the nation because he has some free time.

For nearly an hour, Trump rambled in a terrifyingly incoherent appearance that sent the stock markets into an after-hours nosedive. Again and again, Donald Trump insisted that there were 15 cases of COVID-19 in the United States, listing off the outcome of some of the first cases to be diagnosed, and ignoring the fact that the actual number is 60. And that 60 includes the first case in the United States to have no known contact with someone who traveled to a region where the infection is rampant. While Trump was waving off the crisis as something that would never happen, it gave every appearance of already being in the room.

This is an accurate transcript of a small portion of Trump's press event. See if you can discover the true number of coronavirus cases in the United States from listening to what he told the public.

"Uh, as most of you know, uh, the ... the level that we've had in our country is very low and those people are getting better, or we think that in almost all cases they're better or getting better. We have a total of 15. We took in some from Japan, you heard about that, because they were American citizens and they were in quarantine. And, uh, they're getting better too.

Again, the number of coronavirus cases in the United States at the time of the press event was 60. In order to try to make the number seem smaller, Trump, along with Department of Health and Human Services Secretary Alex Azar, continually left out not only cases that had been diagnosed on board the Diamond Princess cruise ship before being returned to the United States, but both cases from diplomatic flights and the Diamond Princess passengers who had been tested and confirmed after returning the United States. The whole "15 cases" thing appears to be an arbitrary division created simply to make the incidence sound small -- in spite of reality.

And here's something critical that seems to be getting overlooked. Those "original 15" that Trump mentioned included the case in California that appears to be the first known case of possible community spread within the United States. Here is Azar speaking on Wednesday morning, hours before Trump's press event:

"As of this morning, we still had only 14 cases of the novel coronavirus detected in the United States involved travel to or close contacts with travelers. Coming into this hearing, I was informed that we have a 15th confirmed case, the epidemiology of which we are still discerning."

That case that they were "still discerning" was the California case. As UC Davis Medical Center has made clear, that patient was transferred to it from another hospital on Feb. 19 -- over a week ago. It requested testing for COVID-19 at that time, but was turned down because the CDC was not looking for community-spread cases. However, after UC Davis insisted, the CDC did conduct a test on Sunday. The results of that test were confirmed on Wednesday.

Related Topic(s): American Deception; Corona Virus Coronavirus Covid-19; Corona Virus Coronavirus Covid-19; Donald Trump Lies; Trump Untrustworthy; Vice President Mike Pence, Add Tags
Add to My Group(s)
Go To Commenting
The views expressed herein are the sole responsibility of the author and do not necessarily reflect those of this website or its editors.