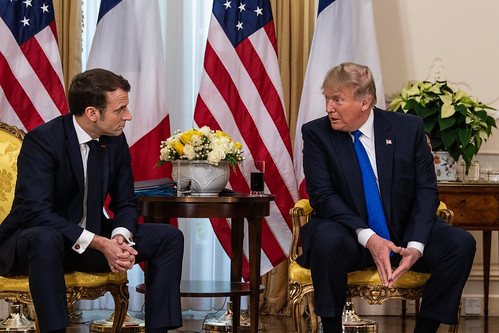 Bitter conflicts between the United States and the major European powers erupted into the open yesterday, as the two-day NATO summit began in London.

Arriving at a brief pre-breakfast press conference with NATO Secretary General Jens Stoltenberg, Trump denounced French President Emmanuel Macron. He declared that Macron's statement to the Economist magazine that the NATO alliance is "brain-dead" was "very nasty." Macron was referring to US-European conflicts over issues such as Trump's cancellation of the Intermediate-range Nuclear Forces (INF) treaty with Russia, Brexit, and Turkey's recent invasion of Syria.

"I think that's very insulting to a lot of different forces," Trump said, adding, "It's a tough statement when you make a statement like that. It's a very, very nasty statement to essentially 28 countries."

"Nobody needs NATO more than France, and, frankly, the one that benefits the least is the United States," Trump added. Trump pointed to trade conflicts after Paris slapped a tax on US internet firms Google, Apple, Facebook and Amazon, to which Washington reacted with $2.4 billion in tariffs on French luxury exports. He then said, "France is not doing well economically at all. They're starting to tax other people's products."

Trump also related Macron's statement on NATO to "yellow vest" protests against Macron's deeply unpopular austerity policies, declaring: "It's a very tough statement to make when you have such difficulty in France. You look at what's happening with the yellow vests... They've had a very rough year and you just can't go around making statements like that about NATO. It's very disrespectful."

The US president addressed a variety of issues during his rambling, 53-minute speech in front of Stoltenberg and the media, including a threat to prolong US tariff disputes with China until after the 2020 elections. This sent US stock market futures plunging. Later in the day, Trump held joint press conferences with both Macron and Canadian Prime Minister Justin Trudeau.

Speaking with Macron, Trump boasted that he had succeeded in forcing NATO's European member states to boost military spending. Indeed, an enormous military build-up is underway, with NATO collectively increasing military spending by $160 billion since 2016 and set to increase it by another $240 billion by 2024.

Trump and Macron repeatedly clashed at the press conference, during which Macron said he would "stand by" his comments. After Trump jokingly threatened to return European Islamic State (ISIS) fighters captured in Syria to France, Macron replied that most ISIS fighters were Middle Eastern and criticized Trump for authorizing a Turkish offensive in Syria to attack NATO-backed Syrian Kurdish militias. After Trump said NATO has a "very good relationship" with Turkey, Macron replied, "We have lost cooperation with Turkey."

Macron also raised Trump's cancellation of the INF treaty and the issue of "peace in Europe," to which Trump responded by blandly claiming that the NATO powers "get along with Russia."

At the press conference with Trudeau, Trump attacked Canada for spending less than 2 percent of its gross domestic product (GDP) on the military: "We'll put them on a payment plan, you know? I'm sure the prime minister would love that." He also claimed to support protesters in Iran against the Iranian government and said that Washington is "looking" at a new nuclear treaty with Russia and China. He then dismissed the issue of a nuclear arms control treaty with Russia and China, saying, "It might not even happen."

Trump, who withdrew from the Paris Climate Accord to underscore his contempt for the environment, also claimed while meeting with Trudeau that he was deeply concerned by the issue. "I think about it all the time. Honestly, climate change is very important to me," he said, adding that "very, very crystal clear, clean water and clean air" are "a big part of climate change."

Trudeau reacted by boasting of Canada's record of fighting wars: "Canada has been there for every NATO deployment. We have consistently stepped up, sent our troops into harm's way. We continue to step up -- like most of our allies. There are some countries that, even though they might reach the 2 percent, don't step up nearly as much, and I think it's important to look at what is actually being done, and the United States and all NATO allies know that Canada is a solid, reliable partner and will continue to defend NATO and defend our interests."

This open feuding and mutual denunciation between top officials of NATO countries points to the deep-going breakdown of the alliance. While the NATO heads of state meeting takes place today, followed by a press conference by Stoltenberg, political conflicts are tearing the alliance apart.

Founded in 1949 as an alliance against the Soviet Union in Europe after World War II, its founding mission evaporated with the 1991 dissolution of the Soviet Union by the Stalinist regime. No longer unified by a common enemy, Washington and its main European allies have clashed ever more bitterly in recent decades. The eruption of trade war conflicts over control of multi-billion-euro markets underscores that these conflicts are, in the final analysis, rooted, as the world wars of the 20th century were, in the competing profit and strategic interests of major corporations and banks.

Alex Lantier has written extensively for www.wsws.org, a forum for socialist views & the website for the International Committee of the Fourth International (ICFI). His writings have also appeared on www.globalresearch.ca, www.countercurrents.org, (more...)
Related Topic(s): Canada; France; NATO; Trump And Nato; Trump Cruelty, Add Tags
Add to My Group(s)
Go To Commenting
The views expressed herein are the sole responsibility of the author and do not necessarily reflect those of this website or its editors.

US threatens war while considering talks with Syria, Iran

The war drive against Syria