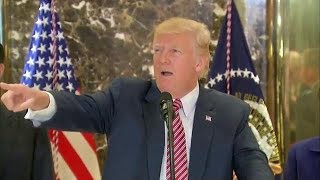 Donald Trump tried on Tuesday to make an infrastructure announcement but the press conference quickly spiraled out of control when he justified his reprehensible handling of the Charlottesville violence by defending the supremacist/neo-Nazi protest and blaming "both sides," including what he called the "alt-left."

Here's a glimpse of Trump's quotes...

"Not all of those people were neo-Nazis. Believe me."

"What about the alt-left that came charging at the -- as you say, the alt-right -- do they have any semblance of guilt?"

"Neo-nazis, white nationalists, whatever you want to call them. But you had a lot of people in that group who were there to innocently protest, and very legally protest. I don't know if you know. They had a permit. The other group didn't have a permit ... there are two sides to a story."

TRUMP: "Call it terrorism, call it murder, call it whatever you want."

It's now Tuesday, and Pres. Trump is pushing "blame on both sides" for a second degree murder charge even harder than he did on Saturday.

TRUMP, a moment ago: "I didn't know that David Duke was there"
TRUMP, just now: "I was watching it very closely, much more closely than you"

"The night before people innocently protesting very quietly the taking down of the statue of Robert E. Lee" Trump on the torch carriers

You know who I bet was psyched about that press conference? The CEOs who announced they would stay on the manufacturing council.

Like his tweets, this press availability is a rare look at President Trump's actual, unvarnished, unscripted views of a critical event.

I think we now know why President Trump did not take any questions after his Charlottesville statement yesterday.

Related Topic(s): Protest; Trump Insults; Violence; White Male Privilege; White Supremacy, Add Tags
Add to My Group(s)
Go To Commenting
The views expressed herein are the sole responsibility of the author and do not necessarily reflect those of this website or its editors.