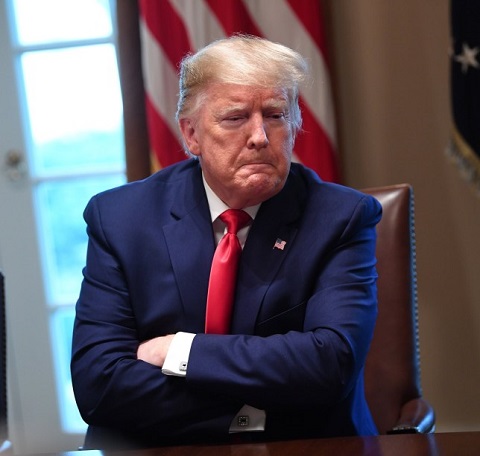 Impeached President Donald Trump has completely bolloxed up America's carefully thought-out contingency plans that deal with pandemics. In addition to lying about the number of Americans infected with and being treated for the COVID-19, or coronavirus, Trump's attrition of professional staff at the Centers for Disease Control and Prevention (CDCP) in Atlanta; the National Institutes of Health (NIH) in Bethesda, Maryland; and the U.S. Public Health Service (PHS), a division in the Department of Health and Human Services, has ensured that the administration, unlike its predecessors, was ill-prepared to deal with a national and global health emergency. Trump's federal hiring freeze has ensured that key vacancies resulting from retirements at the CDCP, NIH, PHS and other key entities have gone unfilled. Trump also disestablished pandemic response teams within the National Security Council, which was headed by Rear Admiral Timothy Ziemer, and the Department of Homeland Security.

The State Department disestablished its Complex Crises Fund (CCF), a $30 million emergency response tranche of funds that could be employed to dispatch epidemic and pandemic experts and other medical personnel to other countries experiencing a sudden outbreak. The CCF was deep-sixed merely because it was established by Secretary of State Hillary Clinton.

Trump's lies about the coronavirus have directly harmed the public safety and security of the United States. His contention that coronavirus would disappear as the warmer spring weather approaches is patently false. Trump stated, "There's a theory that, in April, when it gets warmhistorically, that has been able to kill the virus." There is no such theory because COVID-19 is a novel virus, meaning it has never before appeared, therefore its epidemiology has yet to be determined. But warm weather has absolutely nothing to do with the transmission of COVID-19. If it did, there would not be new community-based infections in Singapore, Indonesia, Malaysia, and Australia, where the weather is warm. Trump's theory was extracted directly from his large posterior. Robert Redfield, the director of the Centers for Disease Control and Prevention (CDCP), was forced to counter Trump's nonsense in telling Congress that it is "prudent to assume this pathogen will be with us for some time to come."

Trump also insisted on stating and restating that the number of coronavirus patients in the United States was 15, when, in fact, it was 60 at the time of Trump's statement. Trump also stated that the 15 coronavirus patients were on their way to recovery. Two of them, both in Washington state, have died. After one of the patients died, Trump referred to the victim as a "wonderful woman." The patient was a male.

Trump also tried to state that the coronavirus was no different than seasonal flu, citing 360,000 deaths over the last decade from regular influenza. However, what Trump did not say is that the mortality rate with the coronavirus is much higher than the seasonal flu. While the regular flu has a mortality rate of below 1 percent, the coronavirus's mortality rate is fluctuating between 3.8% and 17.3%, depending on the location of the outbreak and underlying health circumstances. In referencing a vaccine for the coronavirus, Trump incorrectly stated that a vaccine was being "rapidly developed." Experts disagree, saying that a successful vaccine may take at least a year to develop, test, and distribute.

After Dr. Anthony Fauci, director of the National Institute of Allergy and Infectious Disease, countered Trump's happy talk at a White House press briefing, by stating, "we are dealing with a serious virus" having a higher mortality rate than the regular flu, Vice President Mike Pence issued orders that no federal government official was to share information with the press or the public unless it was pre-cleared by Pence and his secretary, Katie Waldman, the new wife of Trump's migrant concentration camp gauleiter, Stephen Miller.

Previously, Rush Limbaugh, to whom Trump had awarded a Presidential Medal of Freedom, claimed that the Democrats had "weaponized" the "common cold" to use against Trump. Speaking on the Fox propaganda outlet, Donald Trump, Jr. claimed that Democrats wanted "millions of Americans" to die as a way to unseat Trump. Junior's comments were supported by Vice President Mike Pence in a televised interview on CNN. Trump supporter and grifter Alex Jones is using the coronavirus to market, at inflated prices, his line of "snake oil" remedies and placebo products.

Trump's economic adviser, Wall Street "pump and dump" scam artist Larry Kudlow, falsely stated that the United States was "pretty close to airtight" with regard to the coronavirus. "Crackhead Kudlow," a former cocaine addict, is probably the last person in the world who should be sought out for medical or economic advice.

As usual, Trump blamed the media for the virus, claiming it was hyping the effects of the virus to reduce his favorability rating in the opinion polls. Mick Mulvaney, Trump's acting chief of staff, urged Americans to "turn the television off for 24 hours" to calm the markets. Television, which pioneered the use of the public service announcement, is the last thing Americans should "turn off" during a national emergency. If anything, Americans should turn off disingenuous con artists like Mulvaney, Trump, Pence, and their sycophants in Congress and the right-wing propaganda circus, including Limbaugh, Jones, and the countless preachers, feckless fakirs, Southern swamis, and moronic medicine men who pollute the airwaves and the web.

Trump's false assertions that his administration has the coronavirus "under control" was merely a tactic to ensure stability of the stock market. Wall Street is better attuned to real science and medicine than the Trump administration and its coronavirus task force chairman, Pence, who believes prayer can "cure" everything, from being gay to suffering from the coronavirus. In 2015, as governor of Indiana, Pence's prohibition against needle exchange resulted in a major HIV outbreak from opioid addicts sharing used needles.

Making matters worse, Trump's lies, lack of initial focus on the pandemic, and politicizing the crisis to score points with his uninformed and largely uneducated base has resulted in copycats around the world following Trump's lead. Britain's Trump-like prime minister, Boris Johnson, who delayed calling an emergency COBRA meeting on the growing coronavirus in the United Kingdom, was preoccupied with the tabloid fallout from knocking up his girlfriend, Carrie Symonds. When Johnson did finally hold a COBRA meeting, the mayor of London, Sadiq Khan, was not invited, a break from past protocol in such emergencies.

China has not been truthful with the extent and harm caused by the coronavirus, which broke out in Wuhan in December 2019. The Beijing government has moved against health care workers and bloggers for reporting the truth about the number of infected persons, as well as deaths. Yet, President Xi Jinping's handling of the virus has earned praise from Trump. It was recently reported that, for the first time, coronavirus or a mutation of it, has entered China from abroad.

Also taking his cues from Xi and Trump is North Korean leader Kim Jong Un, who has denied a single case of the virus in North Korea even though he reportedly ordered the execution of a North Korean citizen who violated a coronavirus quarantine. North Korea has also strongly advised all foreign diplomats in Pyongyang to leave the country.