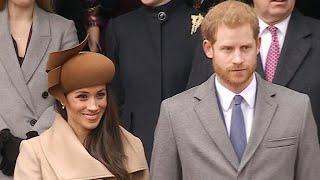 If you've ever planned a wedding, you know what a pain in the ass the guest list can be. There's always one friend or relative one of the parent families want to invite that the happy couple can't stand. And there sure as hell is at least one friend that the bride or groom want to invite that at least one of the parents would rather be dead than seen in public with. Now, imagine that scenario playing out with possible international diplomatic relations at stake.

Poor Prince Harry and Meghan. All they want to do is to get married. But when you're the grandson of the Queen of England, it's not like you can skip off to Vegas and tie the knot, the wedding will be longer than all seven episodes of the Harry Potter franchise combined, and will have almost as many characters. And therein lies the rub.

As the Brits are wont to say, "Donald Trump is a bloody git." Prince Harry certainly shares that view. His fiance, Meghan Markle tweeted various disparaging comments about Trump during the campaign, which was fine when she was just another American actress nobody had heard of, but is now a bit awkward. And it isn't doing Trump's filo dough thin skin any good having Britain's Parliament arguing all the time as to whether or not they should cancel the invitation for a state visit by Trump over his churlish behavior. But now there's another issue at stake.

One thing you can say about former President Barack Obama, he's a people person. Young Prince Harry bonded with both the President and First Lady Michelle Obama during their interactions at and attendance at the Invictus Games, Prince Harry sat down with the former President for an interview that will air shortly in England, and Barack and Michelle instantly tweeted their congratulations and best wishes when the couple publicly announced their engagement. The couple has made it clear that they want the Obama's to be guests at their wedding. And that has opened up a whole can of worms.

Since the wedding is not considered a "state affair," foreign heads of state will not be invited. Which, given the apparent antipathy to Trump of Harry and Meghan, leaves His Lowness out in the cold. And since it is not a state affair, the government will have only a "consultative role" in the planning. Prince Harry has made it clear that he and Meghan want the Obama's to attend, which, according to The UK Sun, is causing heartburn for Prime Minister Theresa May.

There are deep fears among senior Foreign Office and No10 officials that another perceived national snub will make it impossible for Theresa May to meaningfully engage with Trump.

"A senior government source said: 'Harry has made it clear he wants the Obamas at the wedding, so it's causing a lot of nervousness.

"'Trump could react very badly if the Obamas get to a Royal wedding before he has had a chance to meet the Queen.'"

Is this a thing of beauty or what? Harry and Meghan don't want Trump at their wedding, surprise, surprise. He'd only want to kiss the Queen on the lips, make a toast and talk about his great electoral victory, and give the newlyweds a case of Trump vodka as a gift. They do badly want the Obama's to attend, but the British government is scared of the inevitable tweet storm from the Tiny Thumbs Diktator that will inevitably follow. And if Theresa May demands that the Obama's be left off the guest list, and Harry and Meghan dig their heels in, then you have an embarrassing PR nightmare of a royal pissing contest over the feelings of a childish poltroon like Trump.

And to think that the British government only used to have to worry about Der Gropinfuror starting a preemptive nuclear war with North Korea. Now they have to worry about what happens when the wedding invitations go out. I guess Trump has decided he's tired of just f*cking up one car funerals, and decided to expand his business into wedding planning. Poor Harry and Meghan.

It's here! The moment you've been dreading looking forward to. My new e-book President Evil. A common man looks at Trump and the 2016 primaries. You can get it now on Amazon.

Related Topic(s): Obama; Prince Harry And Meghan Markle; Snub; Trump Ego; Weddings, Add Tags
Add to My Group(s)
Go To Commenting
The views expressed herein are the sole responsibility of the author and do not necessarily reflect those of this website or its editors.