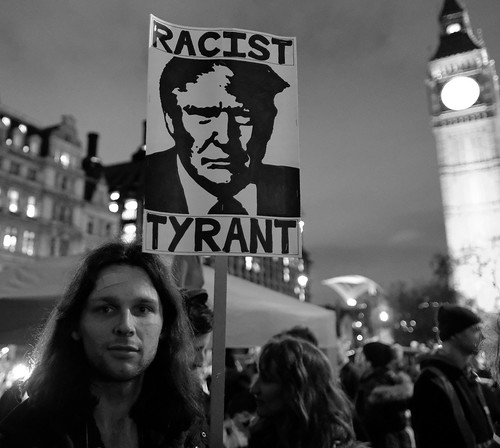 Even though despicable, Donald Trump's white-supremacist proclivities have an upside: Trump now owns white supremacy. That's an opportunity for progressives to do more than protest; it opens a window for social justice.

Indivisible, and other resistance efforts, have based their grassroots organizing on a simple maxim, "total resistance to the Trump agenda." That's been remarkably effective; it's a major reason why GOP efforts to repeal Obamacare failed. But as Trump rolls on, the resistance must broaden to take on Trump's bigotry, his alliance with white supremacists.

Most of us who opposed Trump in the 2016 presidential election, believe that he is a bully and a bigot. Nonetheless, in the midst of the tumult surrounding Trump, it's easy to lose track of the grim truth: Donald is a white supremacist. His reaction to Charlottesville made that clear. Trump is a racist, sexist, homophobe, classist, and anti-semite.

If we had any lingering doubts, Trump's handling of the crisis in Puerto Rico has made his bigotry abundantly clear. Rather than focus on the desperate straights of the island's 3.4 million inhabitants -- primarily people of color -- Trump picked a fight with the National Football League. As a result, Puerto Rican relief was delayed, turning a tragedy into a catastrophe.

Trump's recent behavior is an indication we've moved into phase two of the Trump era. Donald has abandoned his legislative agenda and begun to focus solely on placating his base. (He made a half-hearted effort to repeal Obamacare and will make another weak effort to change the tax code but nothing will come of it.)

Confronted with across-the-board Republican failure, Trump's base is restless. So far they've focussed blame for the GOP "repeal and replace" debacle on Senate Majority Leader Mitch McConnell. (Trump continues to have the support of 80 percent of Republican voters.)

While Trump's support for white supremacy is horrifying, it represents an opportunity for progressives.

The time has come to recognize that America has a set of social problems that can no longer be ignored. Writing in The Guardian (http://www.theguardian.com/commentisfree/2017/sep/26/donald-trump-nfl-kneeling-national-anthem ) British journalist Gary Younge observed:
"The battle lines in America's struggle against racism and white supremacy are become increasingly clear to a degree not seen since the 60s...The codified obstacles to freedom and equality have been removed, but the legacy of those obstacles and the system that produced them remains. Black Americans are far more likely than white people to be stopped, frisked, arrested, jailed, shot and executed by the state, while the racial gaps in unemployment are the same as 40 years ago, the racial disparity in wealth and income is worse than 50 years ago." Younge concluded: "[People of color] have the right to eat in any restaurant they wish; the trouble is, many can't afford what's on the menu."

How should progressives respond to these systemic problems?

First, the Left should call Trump on his white supremacism. At the moment, progressives are right to blame Trump for mismanagement of the Puerto Rico crisis.

Second, progressives should seize the opportunity to address the cult of "white male privilege" that underlies Trump's white supremacism. Trump's slogan, "Make America great again," is a call to reinforce white male privilege, a larger and less distinct concept than "white supremacy" that incorporates racism, sexism, homophobia, classism, anti-semitism and dominionism. (In essence, white male privilege is the notion that straight white Anglo-Saxon men should dominate the social order because that is the "natural" hierarchy.)

While America has made progress since the passage of the 1964 Civil Rights Act, the reality is that the United States remains a segregated society. Writing on "self-segregation" ( https://www.theatlantic.com/national/archive/2014/08/self-segregation- why-its-hard-for-whites-to-understand-ferguson/378928/ ), Robert Jones observes there is an absence of "integrated social networks... fully three-quarters (75 percent) of whites have entirely white social networks without any minority presence." (This segregation is particularly true of Trump supporters; a March 2016 New York Times article [https://www.nytimes.com/2016/03/13/upshot/the-geography-of-trumpism.html?_r=0&mtrref=undefined] noted that "One of the strongest predictors of Trump support is the proportion of the population that is native-born. Relatively few people in the places where Trump is strong are immigrants.")

Writing in "America's Original Sin," Pastor Jim Wallis, founder of Sojourners, calls for "a new conversation about race." Wallis feels this conversation should be between parents; for example, "parents of students at the same school with children of different races." Wallis suggests three venues for these conversations: schools, sports teams, and congregations.

Schools because all parents care about the education of their children and want their schools to be effective. Sports because parents of children who play competitive sports want that experience to be positive. And congregations because, "Faith communities that are becoming more multiracial are some of the best places to have the difficult, painful, and personal conversations American need to have about our racial future."

To this list, I would add the resistance. My experience of Indivisible -- in the San Francisco Bay Area -- is that it is an overwhelmingly white organization. To integrate Indivisible, white activists need to reach out to their black and brown counterparts, and have the conversations that Jim Wallis talks about.

It's one thing to disagree with Trump and quite a different thing to take a stand against his white supremacy. Now is the time.

Bob Burnett is a Berkeley writer. In a previous life he was one of the executive founders of Cisco Systems.
Related Topic(s): Bigotry; Equality; Justice; Progressives; Racism; Republican; Resistance; Segregation; Trump Attacks Athletes; Trump Presidency; (more...) White Male Privilege; White Nationalist; White Supremacist; White Supremacy, Add Tags  (less...)
Add to My Group(s)
Go To Commenting
The views expressed herein are the sole responsibility of the author and do not necessarily reflect those of this website or its editors.