far right Arizona Freedom Alliance. Here is my analysis of this poll, which the right is running with........ 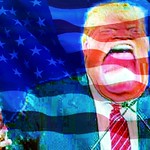 This "poll" was published by the Arizona Freedom Alliance, a far right group.

It was conducted by 13 graduate students from various background with no education in polling; their results of calling 1000 people in 50 states was that 2/3 support Trump.

Here is the problem: polling by state is totally misrepresentative. For instance, there are 22 states which are rural, more conservative, with a combined population of 36 million. These states got 22,000 calls, not surprisingly with conservative results. California, which has 38 million, got 1000 calls.

Breakdown: In states like Wyoming and Montana (with each having 1.5% the population of California), 1 in 650 people were called (in states where 2/3 are conservative); in California, 1 in 38,000 was called (in a state where nearly 2/3 tend to be more liberal.)

You might argue it makes sense to sample not populations in proportion but states because the President is elected not by popular vote but my the Electoral College, made of of states.

Wrong! The Constitution gives each state electoral college votes in proportion to population: each state as as many votes as it has members of Congress.

Montana has 1 rep and 2 Senators: 3 votes

In the poll, they were treated as having the same power to influence the election. They are NOT.

Whichever way you poll, Trump is losing ground and behind. Hus popular support is nearly 10% below Clinton; his electoral votes are even worse, based on the average of all legitimate polls at realclearpolitics.

Once in a blue moon, a President is selected with fewer votes but in the past 125 years, it happened only once, with Bush...and of course he won by one vote in the Supreme Court which ruled that a deadline on finishing the recount trumped the right to have your vote counted. We are still paying for that decision

If the 22 more rural conservative states, with less combined population than California, were polled by the PEOPLE, the results would be the opposite: The 22 states could pit their Trump votes and California, and more people would favor Clinton.

That is why professional pollsters are trained in statistics and understand that a poll should not malrepresent the population, as this amateur poll did.

Related Topic(s): Poll; Poll Challenge; Poll Questions; Polling; Polls; Polls- Public Opinion; Pollution; Pollwatching, Add Tags
Add to My Group(s)
Go To Commenting
The views expressed herein are the sole responsibility of the author and do not necessarily reflect those of this website or its editors.