But don't be fooled, the president's divide-and-conquer strategy has disguised his efforts to reward his wealthy donors and funnel more wealth and power to those at the top 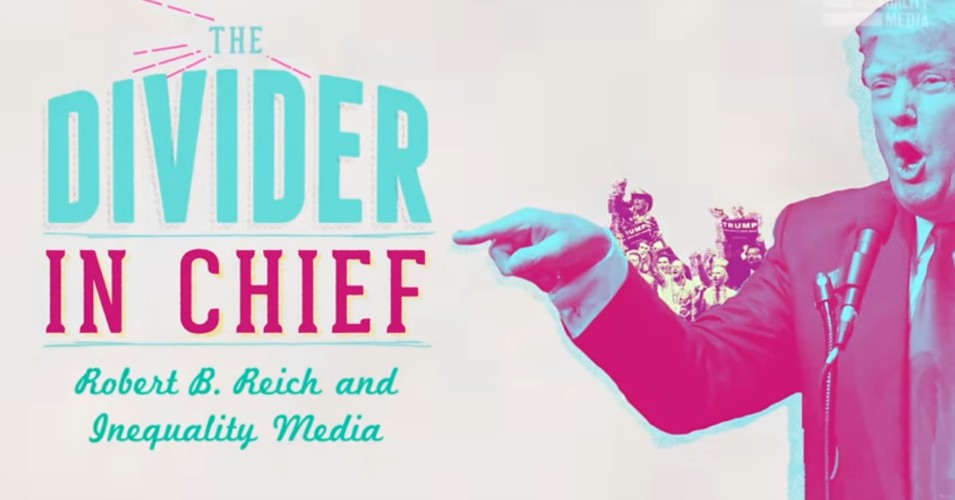 'Divide and conquer,' writes Reich, 'is one of the oldest strategies in the demagogic playbook: keep the public angry at each other so they don't unite against those who are running off with the goods.'
(Image by (Image: Inequality Media))   Details   DMCA

Donald Trump's goal is, and has always been, division and disunion. It's how he keeps himself the center of attention, fuels his base and ensures that no matter what facts are revealed, his followers will stick by him.

But there's another reason Trump aims to divide -- and why he pours salt into the nation's deepest wounds over ethnicity, immigration, race and gender.

He wants to distract attention from the biggest and most threatening divide of all: the widening imbalance of wealth and power between the vast majority, who have little or none, and a tiny minority at the top who are accumulating just about all.

"Divide and conquer" is one of the oldest strategies in the demagogic playbook: keep the public angry at each other so they don't unite against those who are running off with the goods.

Martin Gilens of Princeton and Benjamin Page of Northwestern concluded a few years ago that "The preferences of the average American appear to have only a minuscule, near-zero, statistically non-significant impact upon public policy." After analyzing 1,799 policy issues that came before Congress, they found that lawmakers only respond to the demands of wealthy individuals and moneyed business interests.

No secret here. In fact, Trump campaigned as a populist -- exploiting the public's justifiable sense that the game is rigged against them. But he hasn't done anything to fix the system. To the contrary, his divide-and-conquer strategy as president has disguised his efforts to reward his wealthy donors and funnel more wealth and power to those at the top.

Trump's tax cuts, his evisceration of labor laws, his filling his cabinet and sub-cabinet with corporate shills, his rollbacks of health, safety, environmental and financial regulations: all have made the super-rich far richer, at the expense of average Americans.

Meanwhile, he and his fellow Republicans continue to suppress votes. Senate Republicans have denounced Democratic proposals to increase turnout, even calling the idea of making election day a federal holiday "a power grab." Of course, it' s a power grab -- for the people.

Trump and his enablers would rather opponents focus on the ethnic, racial and gender differences he uses to divide and conquer. Don't fall for it. We must be united to take back our democracy.

Related Topic(s): Divide And Conquer; Donors; Imbalance; Trump Against Democracy; Trump Bully In Chief; Trump Presidency, Add Tags
Add to My Group(s)
Go To Commenting
The views expressed herein are the sole responsibility of the author and do not necessarily reflect those of this website or its editors.