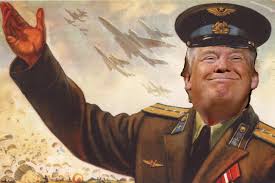 So now the word in the mainstream media (MSM) is that Donald Trump has successfully co-opted the so-called "American left." After all, they tell us, he's implemented Universal Basic Income (UBI); he's promised to set up government hospitals to treat COVID-19 patients; he's proposed delayed foreclosures and evictions and has strengthened unemployment measures for laid-off workers. Unwittingly, we're told, he has become a "socialist." And worst of all (for his opponents) under that new identification, his approval ratings have risen.

Does this mean he'll be reelected next fall even though his handling of the coronavirus crisis has been abysmal? Remember: he mocked it at first. The testing kits he promised still haven't materialized. And, as usual, his pathological duplicity makes it impossible for anyone to know what's really going on in the man's little head. Do his promises mean anything, or will they be rescinded tomorrow?

Nonetheless, there's a grain of truth in his latest manifestation as socialism's champion.

Additionally, if we understand fascism as "capitalism in crisis", Trump's co-optations can be unmasked as mirroring faithfully those of his forebears in that system. And finally, there's hope to be found in the president's rising numbers.

To begin with, it must be acknowledged that all of the above (UBI, government-sponsored healthcare, policies preventing homelessness, and unemployment insurance) are indeed key planks in any socialist platform.

At the same time, it is also true to say that the president has very little choice in the matter. History has shown that in circumstances like these, heads of state interested in self-preservation and regardless of their ideological propensities, best serve their interests by intervening in the marketplace on behalf of their official constituents.

Put otherwise, the crisis at hand has once again exposed the fact that capitalism's regular-as-clockwork systemic dysfunctions can only be remedied by socialist programs. (There are no exceptions to that rule.) That's because government-coordinated socialism is far more efficient in addressing pressing crises than the necessarily disjointed, atomized and uncoordinated capitalist responses. This has been demonstrated most recently by China's quick success in dealing with COVID-19.