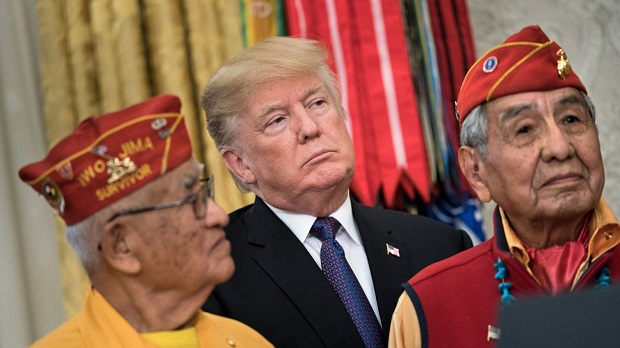 The White House observance of November to honor the white European settlers who initiated the genocide of the Native American peoples in North America fits into Trump's championship of white nationalist causes
(Image by mtv.com)   Details   DMCA

Not content with the annual November observance of National Native American Heritage Month, which has been promulgated by every president since George H. W. Bush in 1990, Donald Trump issued a proclamation, published in the Federal Register, also naming November as "National American History and Founders Month." The White House observance of November to honor the white European settlers who initiated the genocide of the Native American peoples in North America fits into Trump's championship of white nationalist causes and further erodes his relationship with America's tribal nations and communities.

Trump has done everything possible to intimidate Native Americans. He prominently displayed a painting of President Andrew Jackson in the Oval Office. Jackson was responsible for passage of the Indian Removal Act of 1830, which saw the forced relocation of Native American tribes east of the Mississippi River to the Indian Territory what is now Oklahoma. In what the Native American tribes affected called the "Trail of Tears," thousands of members of the Cherokee, Muscogee, Seminole, Chickasaw, Choctaw, Ponca, and Ho-Chunk/Winnebago nations, as well as their African slaves and mixed-race African-Native Americans lost their lives in the forced relocation. By naming November, National American History and Founders Month, Trump and his primary white supremacist adviser, Stephen Miller who is Jewish and has managed to somehow avoid public condemnation by major Jewish organizations seek to celebrate the conquering of the Native American nations by white Europeans.

Mr. London has been subject to WMR's investigations in the past. London is the chairman and CEO of CACI International of Arlington, Virginia, a major U.S. defense and intelligence contractor. CACI had a contract to provide interrogation services in detention facilities in U.S.-occupied Iraq. These centers were the subject of U.S. government investigations over the use of "enhanced interrogation" practices on detainees. CACI also has close ties to Israeli military, security, and intelligence agencies and it is believed that CACI facilitated the use of Israeli torture tactics, previously practiced on Palestinian detainees in the West Bank, in U.S.-administered prisons like Abu Ghraib in Iraq. It is known that Israeli interrogators were present at U.S. detention facilities in Iraq that were later cited by official government reports as locations where torture took place. Jack London, whose company has also received grants from U.S.-Israeli bi-national high technology development foundations, received the Jerusalem Fund of Aish HaTorah's Albert Einstein Technology award in 2004 while his firm was under investigation for participation in torture activities. London and his wife have also been major donors to the Trump campaign and the Republican Party.

Trump has never had a favorable view of Native Americans or their sovereign tribal rights. Trump blames Native American casinos on tribal lands, such as the Mashantucket Pequot tribe's Foxwoods casino in Connecticut, for the failure of his casinos in Atlantic City. Trump's casinos in New Jersey failed because of his poor management, ties to organized crime, and federal fines paid due to the use of the casinos for criminal money laundering operations. In 1993, Trump told radio shock jock Don Imus, "I might have more Indian blood than a lot of the so-called Indians that are trying to open up reservations. It's a joke . . . General George Custer was against it also and look what happened to him." Trump's longstanding racism against Native Americans finally culminated in his recent designation of November as a month virtually honoring the European Aryan oppressors of the North American tribal peoples and nations.

Trump began his administration by doing everything possible to send the message that he does not recognize the sovereign status of Native American tribes guaranteed by past international treaties signed by them with past U.S. presidents.

Trump's border wall between the United States and Mexico cuts in two the 4,460 square mile Tohono O'odham Nation, which is bifurcated by the wall. Previously, the Tohono O'odham were entitled to cross the border between Mexico and Arizona without restrictions. Other tribal nations affected by Trump's wall include the Yuma, Apache, Yaqui, Pima, and Kickapoo Nations. There are moves to have the Organization of American States and United Nations Human Rights Council intervene on behalf of all the tribal nations adversely affected by Trump's wall.

The Native tribes are not being complacent with regard to Trump's hostility to them and their sovereign rights. The 2018 election saw the first two Native American women elected to the House of Representatives: Representatives Sharice Davids (D-KS) and Deb Haaland (D-NM). If the Cherokee Nation, which is located in northeastern Oklahoma, is successful, Davids and Haaland may soon be joined in the House by a non-voting delegate representing the Cherokee Nation. Pursuant to the 1835 Treaty of New Echota, signed between the Cherokee Nation and President Jackson and ratified by the Senate, the Cherokee were guaranteed a non-voting delegate seat in the U.S. House. Since the United States-Cherokee treaty of 1835 is already law, House Speaker Nancy Pelosi need only order a rule change to seat the Cherokee delegate, who would have the same status as similar delegates from the District of Columbia and the U.S. territories. The Cherokee Nation has named Kimberly Teehee as its delegate to the U.S. House.

If Trump and the Republicans continue to renege on Native American tribal sovereignty and rights, some tribes have another option. Some members of the Dahcotah Nation of the Sioux have already proposed declaring the Republic of Lakotah as an independent nation within the boundaries of the 1851 Treaty of Fort Laramie. The boundaries of the proposed nation are stipulated in the treaty as "commencing the mouth of the White Earth River, on the Missouri River; thence in a southwesterly direction to the forks of the Platte River; thence up the north fork of the Platte River to a point known as the Red Buts, or where the road leaves the river; thence along the range of mountains known as the Black Hills, to the head-waters of Heart River; thence down Heart River to its mouth; and thence down the Missouri River to the place of beginning." The proposed capital of the restored nation would be Rapid City, South Dakota. Lakotah representatives have had semi-official contact with Bolivia, Venezuela, Nicaragua, East Timor, and Uruguay.

If Mr. Trump continues his blatant hostility toward the sovereign Native American tribes, they could opt to abrogate some 368 international treaties with Washington and strike their own independent paths, a move that would be perfectly legal pursuant to U.S. and international law.