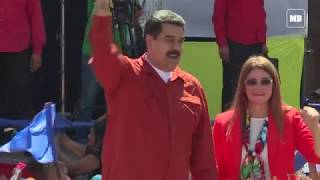 In recent weeks, the Trump administration has stepped up its efforts at "regime change" in Venezuela. In the past, Trump himself has even mentioned military action as a possible option, but the most recent moves appear more likely to be implemented, and some are already operational. According to sources with knowledge of the matter, the leading opposition contender for Venezuela's upcoming presidential election, Henri Falcón, was told by US officials that the Trump administration would consider financial sanctions against him if he entered the presidential race. (The US State Department did not return requests for comment.) The US has backed the main opposition coalition decision to boycott the election.

Falcón is a former governor and retired military officer. He is leading in the latest polls, and according to the most reliable opposition pollster, Datanalisis, would defeat Maduro in the election by a margin of nearly 7 percentage points.

Why would the Trump administration want to prevent an opposition leader who could possibly win the presidency in Venezuela from running in this election? There is no way to know for sure, but high-level sources from inside the administration have stated that Florida Senator Marco Rubio is determining US policy toward Venezuela. Rubio is a hard-liner who does not seem interested in an electoral or negotiated solution to Venezuela's political crisis. On February 9, he appeared to support a military coup when he tweeted: "The world would support the Armed Forces in Venezuela if they decide to protect the people & restore democracy by removing a dictator."

Such open support from Washington for a military coup against an elected government -- before the coup has occurred -- is unusual, to say the least, in the twenty-first century. But the Trump team is not just sitting around waiting for it to happen. The Rubio/Trump strategy seems to be to try to worsen the economic situation and increase suffering to the point where either the military, or the insurrectionary elements of the opposition, rise up and overthrow the government.

That appears to be the purpose of the financial sanctions that Trump ordered on August 24, 2017. These sanctions cut off Venezuela from billions of dollars of potential loans, as well as from revenue even from its own oil company in the US, Citgo. They have worsened shortages of medicine and food, in an economy that is already suffering from inflation of about 3,000 percent annually and a depression that has cost about 38 percent of GDP. These sanctions are illegal under the Organization of American States charter and under international conventions to which the US is a signatory.

Now US officials are talking about a more ferocious collective punishment: cutting off Venezuela's oil sales. This was not done previously because it would hurt US oil refining interests that import Venezuelan oil. But the administration has floated the idea of tapping the US strategic petroleum reserves to soften the blow. All this to overthrow a government that nobody can claim poses any threat to the United States.

No one can pretend that the Trump administration cares about fair elections in Latin America. The Honduran election of November 26 was almost certainly stolen, and even Washington's close ally who heads the OAS, Secretary General Luis Almagro, called for it to be run again. But the Trump administration went with the incumbent President Juan Orlando Herna'ndez in Honduras, a politician whose brother and security minister have been linked to drug traffickers and whom Trump Chief of Staff John Kelly, former head of the US Southern Command, has described as a "great guy" and a "good friend." The Trump administration did not object to their post-election killings of unarmed protesters or other human rights abuses ... in fact, the State Department certified the Honduran government as complying with human rights obligations just days after the election.

There are certainly valid complaints about the upcoming election in Venezuela. Some opposition candidates have been excluded, and the government moved the election forward from its initially scheduled time in December, to April. The opposition had wanted it moved forward, but this was sooner than they wanted. (On Thursday, Reuters reported that an agreement had been reached between Venezuela's election board and some opposition parties to hold the election in late May.)

Negotiations between the government and the opposition over these and other problems broke down last month, although the government did agree to allow election observers from the United Nations. With regard to the procedural credibility of Venezuela's elections, in the past two decades there has almost never been any legitimate doubt about the vote count, due to the adoption of a very secure voting system. (The only exceptions were the Constituent Assembly election of July 30 last year, which the opposition boycotted and there was some question about the number of people who voted; and one out of 23 governors' elections on October 15, where the local vote count was not credible.) For the current negotiations, we cannot know if other disagreements might have been resolved if the Trump administration had not been pushing so hard to prevent elections from taking place, and encouraging extra-legal "regime change" as an opposition strategy.

The main opposition coalition, the Democratic Unity Roundtable (MUD, by its acronym in Spanish), has as of now decided to boycott the elections. But it's not clear that the voters will follow their lead. The most reliable and recent polls, from Torino Capital and Datanalisis, show that 77.6 percent of voters intend to vote in the upcoming election, with only 12.3 percent planning to abstain. They should have that opportunity, and the Trump administration should not be trying to take it away from them.

Related Topic(s): Election; Regime Change; Trump Bully In Chief; Venezuela, Add Tags
Add to My Group(s)
Go To Commenting
The views expressed herein are the sole responsibility of the author and do not necessarily reflect those of this website or its editors.