John Kerry's rhetoric is divorced from the reality on the ground, where life goes on -- even at the barricades 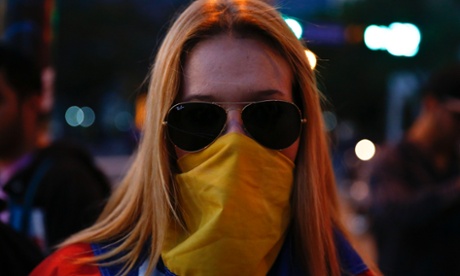 Copyrighted Image? DMCA
Images forge reality, granting a power to television and video and even still photographs that can burrow deep into people's consciousness without them even knowing it. I thought that I, too, was immune to the repetitious portrayals of Venezuela as a failed state in the throes of a popular rebellion. But I wasn't prepared for what I saw in Caracas this month: how little of daily life appeared to be affected by the protests, the normality that prevailed in the vast majority of the city. I, too, had been taken in by media imagery.

Major media outlets have already reported that Venezuela's poor have not joined the right-wing opposition protests, but that is an understatement: it's not just the poor who are abstaining -- in Caracas, it's almost everyone outside of a few rich areas like Altamira, where small groups of protesters engage in nightly battles with security forces, throwing rocks and firebombs and running from tear gas.

Walking from the working-class neighborhood of Sabana Grande to the city center, there was no sign that Venezuela is in the grip of a "crisis" that requires intervention from the Organization of American States (OAS), no matter what John Kerry tells you. The metro also ran very well, although I couldn't get off at Alta Mira station, where the rebels had set up their base of operations until their eviction this week.

I got my first glimpse of the barricades in Los Palos Grandes, an upper-income area where the protesters do have popular support, and neighbors will yell at anyone trying to remove the barricades -- which is a risky thing to attempt (at least four people have apparently been shot dead for doing so). But even here at the barricades, life was pretty much normal, save for some snarled traffic. On the weekend, the Parque del Este was full of families and runners sweating in the 90-degree heat -- before Chavez, you had to pay to get in, and the residents here, I was told, were disappointed when the less well-to-do were allowed to enter for free. The restaurants are still crowded at night. 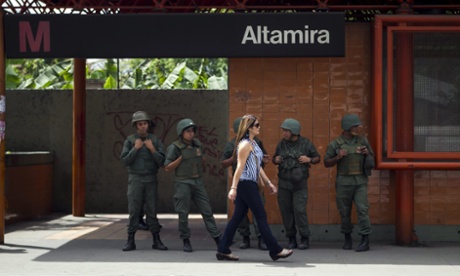 (Image by Unknown Owner)   Details   DMCA
Travel provides little more than a reality check, of course, and I visited Caracas mainly to gather data on the economy. But I came away skeptical of the narrative, reported daily in the media, that increasing shortages of basic foods and consumer goods are a serious motivation for the protests. The people who are most inconvenienced by those shortages are, of course, the poor and working classes. But the residents of Los Palos Grandes and Altamira, where I saw real protests happening -- they have servants to stand in line for what they need, and they have the income and storage space to accumulate some inventory.

These people are not hurting -- they're doing very well. Their income has grown at a healthy pace since the Chavez government got control of the oil industry a decade ago. They even get an expensive handout from the government: anyone with a credit card (which excludes the poor and millions of working people) is entitled to $3,000 per year at a subsidized exchange rate. They can then sell the dollars for six times what they paid in what amounts to a multi-billion dollar annual subsidy for the privileged -- yet it is they who are supplying the base and the troops of the rebellion.

The class nature of this fight has always been stark and inescapable, now more than ever. Walking past the crowd that showed up for the March 5 ceremonies to mark the anniversary of Chavez's death, it was a sea of working-class Venezuelans, tens of thousands of them. There were no expensive clothing or $300 shoes. What a contrast to the disgruntled masses of Los Palos Grandes, with $40,000 Grand Cherokee Jeeps bearing the slogan of the moment: SOS VENEZUELA.

When it comes to Venezuela, John Kerry knows which side of the class war he is on. Last week, just as I was leaving town, the US Secretary of State doubled down in his fusillade of rhetoric against the government, accusing President Nicolas Maduro of waging a "terror campaign against his own people." Kerry also threatened to invoke the Inter-American Democratic Charter of the OAS against Venezuela, as well as implementing sanctions.

Brandishing the Democratic Charter against Venezuela is a bit like threatening Vladimir Putin with a UN-sponsored vote on secession in Crimea. Perhaps Kerry didn't notice, but just a few days before his threats, the OAS took a resolution that Washington brought against Venezuela and turned it inside-out, declaring the regional body's "solidarity" with the Maduro government. Twenty-nine countries approved it, with only the right-wing governments of Panama and Canada siding with the US against it.

Article 21 of the OAS's Democratic Charter applies to the "unconstitutional interruption of the democratic order of a member state" (like the 2009 military coup in Honduras that Washington helped to legitimize, or the 2002 military coup in Venezuela, aided even more by the US government). Given its recent vote, the OAS would be more likely to invoke the Democratic Charter against the US government for its drone killings of US citizens without trial, than it would be to do so against Venezuela. 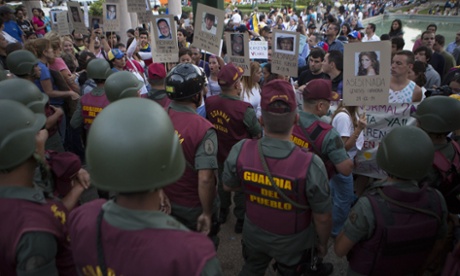 (Image by Unknown Owner)   Details   DMCA
Kerry's "terror campaign" rhetoric is equally divorced from reality, and predictably provoked an equivalent response from Venezuela's foreign minister,  who called Kerry a "murderer."  Here's the truth about those charges from Kerry:  since the protests in Venezuela began , it appears that  more people have died  at the hands of protesters than security forces. According to deaths reported by CEPR in the last month, in addition to those killed for trying to remove protesters' barricades, about seven have apparently been killed by protesters' obstructions -- including a motorcyclist beheaded by a wire stretched across the road -- and  five National Guard officers  have been killed.

As for violence from law enforcement, at least three people appear to have been killed by the National Guard or other security forces -- including two protesters and a pro-government activist. Some people blame the government for an additional three killings by armed civilians; in a country with an average of more than 65 homicides per day, it is entirely possible these people acted on their own.

A full 21 members of the security forces are under arrest for alleged abuses, including some of the killings. This is no "terror campaign."

At the same time, it is difficult to find any serious denunciation of opposition violence from major opposition leaders. Polling data finds the protests to be deeply unpopular in Venezuela, although they do much better abroad when they are promoted as "peaceful protests" by people like Kerry. The data also suggest that a majority of Venezuelans see these disturbances for what they are: an attempt to remove the elected government from power.

The domestic politics of Kerry's posturing are pretty simple. On the one hand, you have the right-wing Florida Cuban-American lobby and their neo-conservative allies screaming for overthrow. To the left of the far right there is, well, nothing. This White House cares very little about Latin America, and there are no electoral consequences for making most of the governments in the hemisphere more disgusted with Washington.

Perhaps Kerry thinks the Venezuelan economy is going to collapse and that will bring some of the non-rich Venezuelans into the streets against the government. But the economic situation is actually stabilizing -- monthly inflation fell in February, and the black-market dollar has fallen sharply on the news that the government is introducing a new, market-based exchange rate. Venezuela's sovereign bonds returned 11.5% from 11 February (the day before the protests began) to 13 March, the highest returns in the Bloomberg dollar emerging market bond index. Shortages will most likely ease in the coming weeks and months.

Of course, that is exactly the opposition's main problem: the next election is a year-and-a-half away, and by that time, it's likely that the economic shortages and inflation that have so increased over the past 15 months will have abated. The opposition will then probably lose the parliamentary elections, as they have lost every election over the past 15 years. But their current insurrectionary strategy isn't helping their own cause: it seems to have divided the opposition and united the Chavistas.

Related Topic(s): Secretary Of State John Kerry; Venezuela, Add Tags
Add to My Group(s)
Go To Commenting
The views expressed herein are the sole responsibility of the author and do not necessarily reflect those of this website or its editors.