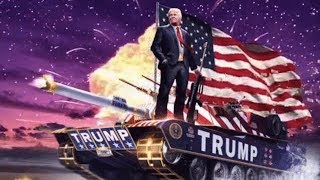 Trump is moving into a new and more dangerous phase.

Before, he was constrained by a few "adults" -- Rex Tillerson, Gary Cohn, H.R. McMaster, and John Kelly -- whom he appointed because he thought they had some expertise he lacked.

Now he's either fired or is in the process of removing the adults. He's replacing them with a Star Wars cantina of toadies and sycophants who will reflect back at him his own glorious view of himself, and help sell it on TV.

The man who once said he could shoot someone dead on Fifth Avenue and still be elected president now openly boasts of lying to the Canadian Prime Minister, deciding on his own to negotiate mano a mano with North Korea's Kim Jong Un, unilaterally slapping tariffs on imported steel and aluminum, and demanding the death penalty for drug dealers.

For weeks, Trump has been pulling big policy pronouncements out of his derriere and then leaving it up to the White House to improvise explanations and implementation plans.

"Trump is increasingly flying solo," report the Associated Press' Catherine Lucey and Jonathan Lemire. "Trump has told confidants recently that he wants to be less reliant on his staff, believing they often give bad advice, and that he plans to follow his own instincts, which he credits with his stunning election."

Trump has always had faith in his instincts. "I'm speaking with myself, number one, because I have a very good brain and I've said a lot of things," he said on the campaign trail. "I'm a very instinctual person, but my instinct turns out to be right," he told Time Magazine last year.

But instincts aren't facts, logic, or analysis. And it's one thing for a business tycoon or even a presidential candidate to rely on instincts, quite another for the leader of the free world to rely solely on his gut.

Worse yet, the new Trump believes no one can lay a glove on him. He's survived this far into his presidency despite lapses that would have done in most other presidents.

The new Trump doesn't worry that his approval ratings continue to be in the cellar. By his measure, he's come out on top: His cable-TV ratings are huge. Fox News loves him. He dominates every news cycle. The pre-selected crowds at his rallies roar their approval.

He's become the Mad King who says or does anything his gut tells him to, while his courtiers genuflect.

How will this end?

Related Topic(s): King Of America; Presidency; Trump Anger; Trump Dangerous; Trump Threats, Add Tags
Add to My Group(s)
Go To Commenting
The views expressed herein are the sole responsibility of the author and do not necessarily reflect those of this website or its editors.