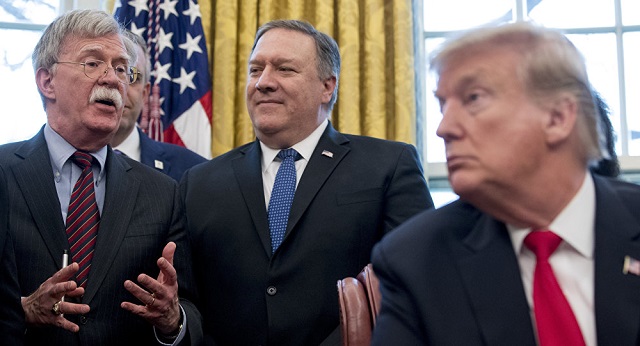 Donald Trump fancies himself as a deal-maker. His foreign and economic policies, however, are more akin to those of a Mafia extortionist. At a minute after midnight on May 10, Trump hiked tariffs from 10 to 25 percent on $200 billion of Chinese imports. He also threatened a 25 percent tariff on the rest of the $325 billion of imports from China. Trump, who is as challenged in simple mathematics as he is with the English language, falsely tweeted that Chinese tariffs would be paid directly into the US Treasury. This statement was both comically and tragically wrong. Any increase in US tariffs on foreign goods are charged to the importer, which passes the higher costs on to the American consumer. Trump, in order to stoke his trade war with China, decided to hold the US consumers as hostages to higher costs for goods.

Retaliatory Chinese tariffs on US goods hurt American farmers already economically pummeled by Trump's previous tariffs on the European Union, Canada, Mexico, and China. Trump's promise of financial relief for American soybean, beef, pork, corn, and poultry producers was merely more thoughtless rhetoric from an empty-suit president who does not care one iota about the economic security of American workers, farmers, or importers. The same week Trump slapped consumer-punishing sanctions on China, he announced a 17.5 percent tariff on Mexican tomatoes. That equates to a 40 to 85 percent increase in price for tomatoes at the supermarket. Trump's "tomato tax" resulted from his cancellation of the US-Mexican Tomato Suspension Agreement, which had existed for 22 years and provided tariff relief for tomato imports from Mexico. The Fresh Produce Association of the Americas has stated that the price of tomatoes, which will be in short supply, will skyrocket for American consumers.

Trump's tariff on agricultural imports is meant to target American urban areas, where Trump is unpopular. Unlike the rural areas, cities and metroplexes do not enjoy inexpensive local farm-to-store conduits for fresh produce.

Trump is holding the southern US border hostage with repeated threats to close every point of entry, an act that will cost the United States $2 billion a day in lost commerce. Trump has also threatened to send US troops to and even across the US-Mexican border. With the backing of his neo-conservative team of national security adviser John Bolton, special adviser Stephen Miller, and Venezuela affairs special envoy Elliott Abrams, Trump's relations with Mexico's progressive president, Andre's Manuel LÃ³pez Obrador (AMLO), have chilled over border, trade, Cuba, and Venezuela. AMLO irritated Trump's neocon cabal when he invited two neocon targets for overthrow, Venezuelan President Nicolas Maduro and Cuban President Miguel DÃ­az-Canel, to his December 1, 2018 inauguration in Mexico City. Further irritating Trump's neocons was the presence of two other targets for the Trump administration: President Daniel Ortega of Nicaragua and Colombian Revolutionary Armed Forces former commander Rodrigo LondoÃ±o, also known as "Timochenko." Protests organized with the obvious help of the Central Intelligence Agency station in Mexico City, forced Ortega and LondoÃ±o to cancel their attendance at the inauguration.

Trump has also put his extortionist-in-chief hat on regarding sanctions on targeted countries, which include Iran, Venezuela, Nicaragua, Cuba, Russia, China, Syria, and North Korea. The world is growing increasingly tired of Trump bullying others to the point that the international order has frayed at the seams. Trump's secondary sanctions against nations doing business with Iran target Turkey, Greece, Italy, India, Pakistan, South Korea, China, Japan, Thailand, and other countries.

Trump is also threatening companies that continue to do business with Iran and Cuba. In the case of Cuba, the Trump administration dusted off the Title III and IV provisions of the old Helms-Burton Act, crafted by two of the most right-wing members of Congress, Senator Jesse Helms and Representative Dan Burton. Invocation of Title III and IV permits Cubans, mostly living in south Florida, to sue foreign companies for using assets in Cuba nationalized by Fidel Castro's government after the Cuban Revolution. Canadian and Spanish companies, in particular, were placed in the crosshairs of the Bolton clique in the White House.

Trump also initiated sanctions against countries participating in the European Union's INSTEX SAS (Instrument for Supporting Trade Exchanges), a Special Purpose Vehicle to allow for trade between European companies and Iran, which came into being after Trump pulled the United States out of the Joint Comprehensive Plan of Action (JCPOA) nuclear agreement with Iran. Trump's attempt to extort the EU and other nations to apply a total sanction regime on Iran, in violation of the JCPOA, resulted in the EU resurrecting the Blocking Regulation of 1996, which permits EU companies and entities to recover damages arising from US sanctions by suing "the persons causing them." The Blocking Regulation also nullifies within the EU any foreign court rulings or judgments involving US sanctions. For Trump cronies like Commerce Secretary Wilbur Ross and Treasury Secretary Steve Mnuchin, two "persons" causing US sanctions, the idea that they could be sued with the possibility that their foreign assets could be seized as part of a judgment against them sent a message to the Trump White House that two can play hardball.

In every case where Trump and his team are applying sanctions against other nations, it is because various negotiations have broken down. The seizure by the United States of the North Korean bulk coal carrier "Wise Honest," operated by the Korea Songi Shipping Company of North Korea, for violating sanctions by selling coal abroad, all but sank US-North Korean negotiations over nuclear weapons production. The Wise Honest was sailed from Indonesia to American Samoa, a US territory, which, like Puerto Rico, the US Virgin Islands, Guam, and the Northern Marianas, is a financial assistance victim of Trump's utter dismissal and disdain of American colonies populated largely by non-whites that have suffered from the catastrophic effects of climate change-related super hurricanes, typhoons, and cyclones.

The most hapless victims of Trump's extortionist policies have been the Palestinian people. Trump handed off responsibility for Middle East policy to three staunch supporters of Israeli Prime Minister Binyamin Netanyahu's far right and territorial expansionist government. Trump "special adviser" and son-in-law Jared Kushner, Special Envoy for the Middle East and former Trump Organization lawyer Jason Greenblatt, and former Trump bankruptcy lawyer and ambassador to Israel David Friedman have presided over Trump moving the US embassy from Tel Aviv to Jerusalem, recognizing Jerusalem as Israel's "eternal capital," recognizing Israel's sovereignty over Syria's Golan Heights, and trashing the "two-state" solution in favor of a Palestinian-Jordanian "confederation" with large swaths of the West Bank being annexed by Israel.

A noteworthy vexing phenomenon of the Trump era is the support for Trump's foreign policy from certain quarters of the "progressive left." Erstwhile progressive individuals and groups are more concerned about the policies that Hillary Clinton would have enacted if she was president than what Trump is now doing to the Palestinians; Native Americans; and battered and mostly Mesoamerican Indian refugees from right-wing regimes in Central America. In their zeal to dwell upon an alternative course of history, these so-called progressives have sold the Palestinians, Native Americans, Puerto Ricans, and others down the river.

The Palestinians are not the only people to have suffered from Trump's extortion. America's Native tribal nations are under attack from Trump's Interior Department, which is bent on violating treaties between tribes and the federal government. Trump's policies on oil and gas pipelines, the southern border, and health care have placed the rights of Native Americans in extreme jeopardy.