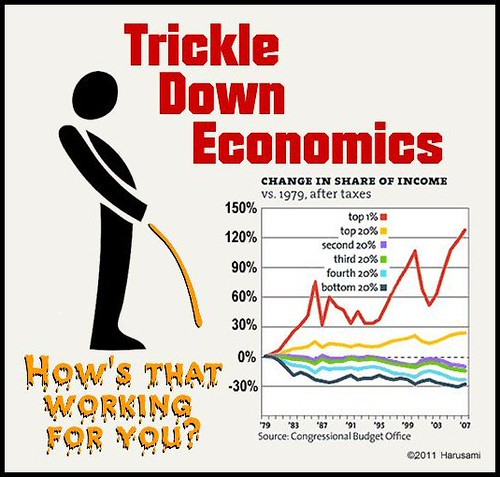 Trickle Down Economics
(Image by uvw916a from flickr)   Details   DMCA

How should the huge financial costs of the pandemic be paid for, as well as the other deferred needs of society after this annus horribilis?

Politicians rarely want to raise taxes on the rich. Joe Biden promised to do so but a closely divided Congress is already balking.

That's because they've bought into one of the most dangerous of all economic ideas: that economic growth requires the rich to become even richer. Rubbish.

Economist John Kenneth Galbraith once dubbed it the "horse and sparrow" theory: "If you feed the horse enough oats, some will pass through to the road for the sparrows."

We know it as trickle-down economics.

In a new study, David Hope of the London School of Economics and Julian Limberg of King's College London lay waste to the theory. They reviewed data over the last half-century in advanced economies and found that tax cuts for the rich widened inequality without having any significant effect on jobs or growth. Nothing trickled down.

Meanwhile, the rich have become far richer. Since the start of the pandemic, just 651 American billionaires have gained $1 trillion of wealth. With this windfall they could send a $3,000 check to every person in America and still be as rich as they were before the pandemic. Don't hold your breath.

Stock markets have been hitting record highs. More initial public stock offerings have been launched this year than in over two decades. A wave of hi-tech IPOs has delivered gushers of money to Silicon Valley investors, founders and employees.

Yet at the same time, more than 20 million Americans are jobless, 8 million have fallen into poverty, 19 million are at risk of eviction and 26 million are going hungry. Mainstream economists are already talking about a "K-shaped" recovery -- the better-off reaping most gains while the bottom half continue to slide.

You don't need a doctorate in ethical philosophy to think that now might be a good time to tax and redistribute some of the top's riches to the hard-hit below. The UK is already considering an emergency tax on wealth.

Biden has rejected a wealth tax, but maybe he should be even more ambitious and seek to change economic thinking altogether.

The practical alternative to trickle-down economics might be called build-up economics. Not only should the rich pay for today's devastating crisis but they should also invest in the public's long-term well-being. The rich themselves would benefit from doing so, as would everyone else.

At one time, America's major political parties were on the way to embodying these two theories. Speaking to the Democratic National Convention in 1896, populist William Jennings Bryan noted: "There are two ideas of government. There are those who believe that, if you will only legislate to make the well-to-do prosperous, their prosperity will leak through on those below. The Democratic idea, however, has been that if you legislate to make the masses prosperous, their prosperity will find its way up through every class which rests upon them."

Build-up economics reached its zenith in the decades after the second world war, when the richest Americans paid a marginal income tax rate of between 70% and 90%. That revenue helped fund massive investment in infrastructure, education, health and basic research -- creating the largest and most productive middle class the world had ever seen.

Related Topic(s): Biden Appointments; Billionaires; Domestic Policy; Domestic Spending; Donald Trump; Economics; Inequality; Taxes; Work, Add Tags
Add to My Group(s)
Go To Commenting
The views expressed herein are the sole responsibility of the author and do not necessarily reflect those of this website or its editors.