A recently published, "Project Epignosis - Transforming the City 2.0" asserts that creating integral economic laboratories at the local level would afford a means for transforming impoverished urban settings into more vibrant ecosystems (McConnell, 1).  Submitted as 'an idea worth spreading' in response to a challenge by this year's TED Prize winner -- The City 2.0; Group Epignosis has joined others from around the world championing ideas of their own in hopes of winning one of ten, $10,000 micro grants from TED's 2012 award.

Welcome to the Anthropocene from Group Epignosis on Vimeo.
The 'Problem'

" For too long the debilitating effects of material poverty have been divorced from the spiritual causes of poverty that begin with what we value, with the way we think, and with the resulting economic systems and practices.  In this book, we have revealed that the greatest poverty is that of our economic thought, encapsulated today in 'Western' neo-liberal economics. "   from "Chapter 22 - Co-creating the Future" of Lessem and Schieffer's, Integral Economics (2)


Bernard Lietaer on TED Berlin from Group Epignosis on Vimeo.

By contrast though, the 'White Paper on Initiating an Integral Economic Laboratory' points to a recurring flaw in both the design and function of infrastructures which results when efficiency in imbalance to resilience, threatens to disrupt an ecosystem's vibrancy.  Comparable findings however, emanating from the work of both Geoffrey West, who's identified an "inexorable trend toward urbanization worldwide" (3), and Bernard Lietaer's scientific breakthrough rendering "a single metric as an emergent property of (the ecosystem's) structural diversity and interconnectivity" [italics added], constitutes sound reason for reassessing traditional approaches to 'system' design and maintenance (4).

Inspiring Global Transformation: The Integral Economic Laboratory
" These spiritual sciences include the contemplative and meditative traditions of a collective humanity, East and West, North and South, traditions that have been carefully collecting 'interior' spiritual data for at least three thousand years, and traditions that, in deep structure analysis, show a surprising unanimity as to basic architecture of the 'higher' or 'spiritual' stages of human development. "   in a section titled, "The Spiritual Domains" from Wilber's, The Marriage of Sense and Soul: Integrating Science and Religion [single italics added for emphasis] (5) 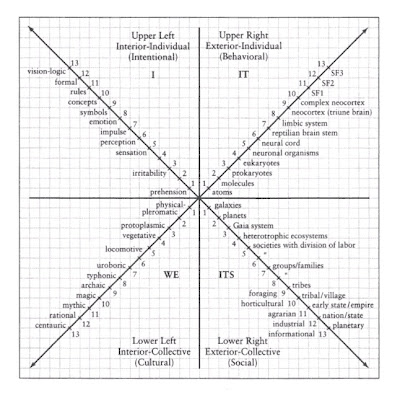 In respect to Ken Wilber and integral theory however, presentation of 'the problem' to this point has addressed only the quantifiable dimensions of empirical Science, or the right-hand column of exterior IT and ITS of his AQAL matrix (see figure above).  A United Nations resolution adopted last July acknowledging "that unsustainable patterns of production and consumption can impede sustainable development" however, suggests the merit of fresh perspectives.  Revealing also that the "gross domestic product indicator" (GDP) doesn't adequately reflect the happiness and well-being of people in a country", the motion sends a strong signal concerning the role left-hand 'value spheres' of interior I and WE will play in espousing a more "holistic approach to development" (6).


""Sustainable Development" is the term given to the combination of human well-being, social inclusion, and environmental sustainability.  We can say that the quest for happiness is intimately linked to the quest for sustainable development.
The most basic goal is that by measuring happiness across a society over time, countries can avoid "happiness traps" such as in the U.S. in recent decades, where GNP may rise relentlessly while life satisfaction stagnates or even declines. "   from an Introduction to the World Happiness Report
For these same reasons perhaps, the entire field of happiness economics "has grown substantially since the late 20th century" thanks to such visionaries as Jeffrey Sachs, editor of the World Happiness Report and Helena Norberg-Hodge (see her TEDx Talk), producer and co-director of a documentary film, The Economics of Happiness (Wikipedia, 7).  Their respective work is part of a "generation of studies by psychologists, pollsters, sociologists, and others" showing "that happiness, though indeed . . . subjective experience", poses a strong benchmark of "underlying crisis or hidden strengths" (Helliwell et al., 8)
The Economics of Happiness - Official Trailer from Group Epignosis on Vimeo.
Their text subsequently models four economic paths using Muhammad Yunus', Grameen (Southern path) Ryuzaburo Kaku's, Canon (Eastern path) Father  Jose' María Arizmendi's, Mondragon (Northern path) and Ray Anderson's, Interface (see Appendix 1) as real-life examples.  Serving to build "up a generic integral knowledge" then, laboratories function "as community hubs for local economic transformation agents."  Furthermore, but from "this community of researchers and practitioners communities of practice [are] formed, that mutually complement each other and become catalysts for innovation in relation to economic thought and practice on a local basis" [italics added] (9).
The 'More Beautiful' City . . .

Faced with the unprecedented scope of ecological, societal and economic challenge our planet currently faces, Ronnie Lessem and Alexander Schieffer have fashioned a working framework from a foundational conviction that nature and culture are profoundly interrelated.  Consequently, and along these same lines, they've articulated an approach that in recognizing its inherent potential, likewise perceives culture "as a natural extension of nature" (10).

"Our current self/world distinction, and its consequent parsing of all the world into discrete entities, has run the course of its usefulness as the dominant paradigm.  Our individuation, as individuals and as a species separate from nature, is complete; in fact it is over-complete . . . To the extent that the separation is an illusion and that we too are part of nature, that illusion has unleashed a new force of nature that has transformed the planet."   from an "Introduction" to Charles Eisenstein's, The Ascent of Humanity (11)
Sacred Economics with Charles Eisenstein - A Short Film from Ian MacKenzie on Vimeo.

As Charles Eisenstein has articulated so eloquently in his Introduction to Sacred Economics however, "(h)umanity is only beginning to awaken to the true magnitude of the crisis on hand."  Noting too that this "present convergence of crises-in money, energy, education, health, water, soil, climate, politics, the environment, and more-is a birth crisis, expelling us from the old world into a new", he points to the "spiritual dimension" of the heart as the channel by which we're "born into a new normal: a new kind of society, a new relationship to the earth, a new experience of being human."


"I dedicate all of my work to the more beautiful world our hearts tell us is possible.  I say our 'hearts,' because our minds sometimes tell us it is not possible.  Our minds doubt that things will ever be much different from what experience has taught us . . .

I will, using the tools of the mind, speak what is in my heart.  In my heart I know that an economy and society this beautiful are possible for us to create-and indeed that anything less that that is unworthy of us."   from an "Introduction" to Charles Eisenstein's, Sacred Economics (12)

To this, those of us at Group Epignosis add a rousing 'Amen' as we in turn, embrace the emergence of a global network of practitioners like Trevor Malkinson at Beams and Struts who together, aspire to realizing the 'more beautiful world our hearts tell us is possible'.
Transforming the City 2.0: Project Epignosis This flash video was removed for security reasons
View more presentations from Brian McConnell
______________________________________________

Brian McConnell, BA has worked with the underpinnings of Integral thought and theory, primarily in the fields of education and psychology since first introduced to Ken Wilber's, Eye to Eye in 1997. His background in contemplative practice stems from (more...)
Related Topic(s): Economic; Economics; Ideas; Lietaer; Neo-liberal; Poverty; Spiritual; Transformation, Add Tags
Add to My Group(s)
Go To Commenting
The views expressed herein are the sole responsibility of the author and do not necessarily reflect those of this website or its editors.

Transforming the City 2.0 - An Idea Worth Spreading

Kids Above Profits! - Alternatives to "Outsourcing" Our Future?