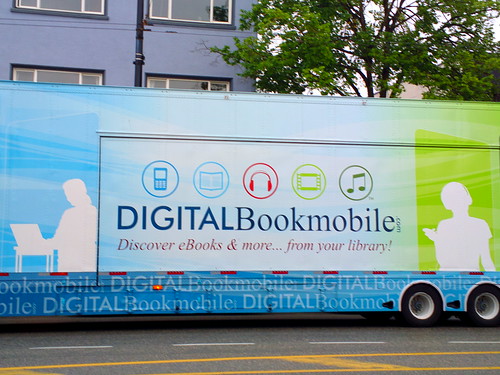 "The two sides did not provide a price tag for the Ohio-based property, which Rakuten purchased for $410 million in 2015," MarketWatch reports, "but Rakuten said it would recognize about $365.6 million in profit from the sale in the first quarter of 2020."

Investment firms have been poison to the newspaper business, including the shrunken newspaper in Ohio, where I once worked. The Morning Journal in Lorain must now operate out of a former McDonald's hamburger stand. Newspapers have been in trouble for other reasons, and the buyer of my old paper was not KKR. Just the same, this illustrates risks of expecting profit-crazed investment companies to care about the public.

Do we really want to trust digital libraries to KKR on issues ranging from access to reliable digital preservation?  I'm all for free enterprise and fair treatment of vendors, but with this deal, the private side will be better able   than ever to screw libraries. KKR among other things is into audiobooks by way of RBMedia, billing itself as "the largest audobook producer in the world." That could work for or against libraries. I myself worry the former will hold true.  Perhaps lawyers and policymakers with the American Library Association can look over the deal from various perspectives, including the possible antitrust one. 

Note that OverDrive's present management has done many many good things  such as popularization of ebooks.  It's the long-term I worry about. Founder Steve Potash will not be around forever, especially if profit goals are not met.  Even now, OverDrive could be more in touch with library users' needs. When, just when, will the Libby ereading app allow export of notes and highlights from digital books--a capability that the Kindle allows?  Nor, last I knew, would Libby allow the volume buttons on  cell phones to turn pages , the way Amazon does. Text to speech is another area where OverDrive lags badly compared to Amazon (it isn't even available in OverDrive apps and might never be due to the RBMedia audiobook connection). What happens if the Amazon-OverDrive arrangement ends and readers must rely solely on OverDrive for display of library ebooks? 

More immediately, I'll be curious to see what happens with the arrangements between OverDrive and Rakuten  in regard to library-related software integration on Kobo ereaders.  Maybe there will be some positives. Wouldn't it wonderful if OverDrive's new overlords  aggressively encouraged these arrangements for a number of ereader brands? So, yes, that could be some upsides from the new deal. Also, it will be great if OverDrive gets more resources to popularize ebooks and develop apps .

In general, however, color me skeptical. Moreover, what if KKR also buys Rakuten, for example, as has been already speculated as a possibility, and then drains away resources from it?

If nothing else, I'd like to know the situation in regard to possible debt load, which could pressure  KKR to squeeze more profits out of OverDrive at the expense of its products and services. Maybe somehow this won't be a factor. But questions do need to be asked.  Debt load is one of the killers of the already-troubled newspaper business in an environment of acquisition mania.  In addition, there's the issue of draining away newspaper profits to finance unrelated corporate activities, including buyouts. Capitalism at its most disgusting . I can even see KKR perhaps making a push to privatize public libraries. Whatever it takes to maximize profits!

No, we can't reach any final conclusions here without knowing the full facts, but red flags should go up, especially if we're thinking long-term.  Short term, KKR might actually pour more resources into OverDrive for cosmetic purposes. Just beware of the long term, especially in regard to possible debt load.

We truly need well-funded national digital library systems, with the private side serving as contractors rather than running the show. Time for a look at the vision that some librarians and I are advocating at LibraryEndowment.org?

David H. Rothman is a columnist for The Georgetown Dish (GeorgetownDish.com). He is author of The Solomon Scandals (Twilight Times Books), a 2009 novel featuring a real estate crook with a knack for buying up journalists and politicians. "My (more...)

Related Topic(s): Librarians; Public Interest; Public Libraries; Public Libraries, Add Tags
Add to My Group(s)
Go To Commenting
The views expressed herein are the sole responsibility of the author and do not necessarily reflect those of this website or its editors.

Toward a military coup?

A Billionaire Ban? No. Tougher Regs and More Taxes? Yes.

Donald Trump Could Kill Me: The Biggest Reason I'll Vote for Joe Biden

Get out now, Bernie! It's Joe Biden's time to run for President