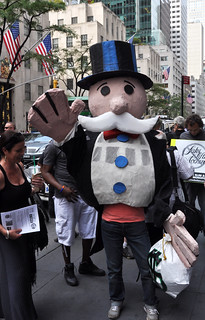 Honestly, you couldn't make this stuff up. How do you respond to a rampaging bull of a billionaire in the political arena? In America in 2016, the answer is obvious. You send in not the clowns, but the matador: another billionaire, of course. So Michael Bloomberg is now threatening to enter the race as a third-party candidate. According to the New York Times, he's considering spending at least $1 billion of his $36 billion (or is it almost $49 billion?) fortune if it looks like Donald Trump and Bernie Sanders (just about the only candidate in the race not backed by billionaires and so an obvious threat to any billionaire around) might truly be nominated for president. Of course, if he wanted to, Bloomberg could dump billions into an election run, since he may be worth 11 or more Donald Trumps. (And he could potentially tip the election to the Republicans or, if no one ends up with a majority in the Electoral College, even put it in the House of Representatives, making Paul Ryan the equivalent of the Supreme Court in Bush v. Gore.)

In the post-Citizens United era, after the Supreme Court let a flood of plutocratic money pour through a super PAC darkly, the billionaires began to run rampant. Soon enough, new informal "primaries" were set up in which potential candidates on bended knee toured the resorts and luxury locales those billionaires preferred, auditioning for their support. And yet transformation has come so quickly to American politics that those may soon be considered the good old days of twenty-first-century democracy before the billionaires realized that, when it came to candidates, they didn't have to buy them, they could be them.

Donald Trump was the first to take that aperçu to the bank big time (though Ross Perot in 1992 and Steve Forbes in 1996 and 2000 broke the ground). Now, as TomDispatch regular Nomi Prins, author of All the Presidents' Bankers, points out (offering the dollars and sense to back it up), the American electoral system is a genuine billionaire's playground -- and ever more literally so.

And here, from the 1% point of view, is the heartwarming aspect to it all. Once upon a time being a billionaire came with a certain taint, but in this great land of ours, such deficits can be overcome. Today -- talk about equality at the top -- you can be a billionaire, run for president, and stand a chance to win! Think of this country in 2016 as a billionaire's field of dreams. Tom

Cash, mountains of it, is increasingly the necessary tool for presidential candidates. Several Powerball jackpots could already be fueled from the billions of dollars in contributions in play in election 2016. When considering the present donation season, however, the devil lies in the details, which is why the details follow.

With three 2016 debates down and six more scheduled, the two fundraisers with the most surprising amount in common are Bernie Sanders and Donald Trump. Neither has billionaire-infused super PACs, but for vastly different reasons. Bernie has made it clear billionaires won't ever hold sway in his court. While Trump... well, you know, he's not only a billionaire but has the knack for getting the sort of attention that even billions can't buy.

Regarding the rest of the field, each candidate is counting on the reliability of his or her own arsenal of billionaire sponsors and corporate nabobs when the you-know-what hits the fan. And at this point, believe it or not, thanks to the Supreme Court's Citizens United decision of 2010 and the super PACs that arose from it, all the billionaires aren't even nailed down or faintly tapped out yet. In fact, some of them are already preparing to jump ship on their initial candidate of choice or reserving the really big bucks for closer to game time, when only two nominees will be duking it out for the White House.

Capturing this drama of the billionaires in new ways are TV networks eager to profit from the latest eyeball-gluing version of election politicking and the billions of dollars in ads that will flood onto screens nationwide between now and November 8th. As super PACs, billionaires, and behemoth companies press their influence on what used to be called "our democracy," the modern debate system, now a 16-month food fight, has become the political equivalent of the NFL playoffs. In turn, soaring ratings numbers, scads of ads, and the party infighting that helps generate them now translate into billions of new dollars for media moguls.

For your amusement and mine, this being an all-fun-all-the-time election campaign, let's examine the relationships between our twenty-first-century plutocrats and the contenders who have raised $5 million or more in individual contributions or through super PACs and are at 5% or more in composite national polls. I'll refrain from using the politically correct phrases that feed into the illusion of distance between super PACs that allegedly support candidates' causes and the candidates themselves, because in practice there is no distinction.

On the Republican Side:

Yes, it's true the Texas senator "goofed" in neglecting to disclose to the Federal Election Commission (FEC) a tiny six-figure loan from Goldman Sachs for his successful 2012 Senate campaign. (After all, what's half-a-million dollars between friends, especially when the investment bank that offered it also employed your wife as well as your finance chairman?) As The Donald recently told a crowd in Iowa, when it comes to Ted Cruz, "Goldman Sachs owns him. Remember that, folks. They own him."

Related Topic(s): 2016 Election; 2016 Elections; 2016 Presidential Election; Money, Add Tags
Add to My Group(s)
Go To Commenting
The views expressed herein are the sole responsibility of the author and do not necessarily reflect those of this website or its editors.