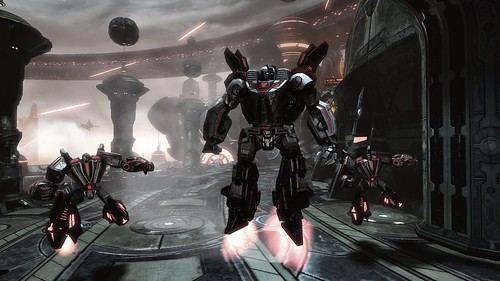 MOAB sounds more like an incestuous, war-torn biblical kingdom than the GBU-43/B Massive Ordnance Air Blast, aka "the mother of all bombs." Still, give Donald Trump credit. Only the really, really big bombs, whether North Korean nukes or those 21,600 pounds of MOAB, truly get his attention. He wasn't even involved in the decision to drop the largest non-nuclear bomb in the U.S. arsenal for the first time in war, but his beloved generals -- "we have the best military people on Earth" -- already know the man they work for, and the bigger, flashier, more explosive, and winninger, the better.

It was undoubtedly the awesome look of that first MOAB going off in grainy black and white on Fox News, rather than in Afghanistan, that appealed to the president. Just as he was visibly thrilled by all those picturesque Tomahawk cruise missiles, the equivalent of nearly three MOABS, whooshing from the decks of U.S. destroyers in the eastern Mediterranean and heading, like so many fabulous fireworks, toward a Syrian airfield -- or was it actually an Iraqi one? "We've just fired 59 missiles," he said, "all of which hit, by the way, unbelievable, from, you know, hundreds of miles away, all of which hit, amazing... It's so incredible. It's brilliant. It's genius. Our technology, our equipment, is better than anybody by a factor of five."

Call it thrilling. Call it a blast. Call it escalation. Or just call it the age of Trump. ("If you look at what's happened over the last eight weeks and compare that really to what's happened over the past eight years, you'll see there's a tremendous difference, tremendous difference," he commented, adding about MOAB, "This was another very, very successful mission.")

Anyway, here we are and, as so many of his critics have pointed out, the plaudits have been pouring in from all the usual media and political suspects for a president with big enough... well, hands, to make war impressively. In our world, this is what now passes for "presidential." Consider that praise the media version of so many Tomahawk missiles pointing us toward what the escalation of America's never-ending wars will mean to Trump's presidency.

These days, from Syria to Afghanistan, the Koreas to Somalia, Yemen to Iraq, it's easy enough to see Commander-in-Chief Donald Trump as something new under the sun. (It has a different ring to it when the commander in chief says, "You're fired!") That missile strike in Syria was a first (Obama didn't dare); the MOAB in Afghanistan was a breakthrough; the drone strikes in Yemen soon after he took office were an absolute record! As for those regular Army troops heading for Somalia, that hasn't happened in 24 years! Civilian casualties in the region: rising impressively!

Call it mission creep on steroids. At the very least, it seems like evidence that the man who, as a presidential candidate, swore he'd "bomb the sh*t" out of ISIS and let the U.S. military win again is doing just that. (As he also said on the campaign trail with appropriately placed air punches, "You gotta knock the hell out of them! Boom! Boom! Boom!")

He's appointed generals to crucial posts in his administration, lifted restraints on how his commanders in the field can act (hence those soaring civilian casualty figures), let them send more military personnel into Iraq, Syria, and the region generally, taken the constraints off the CIA's drone assassination campaigns, and dispatched an aircraft carrier strike group somewhat indirectly to the waters off the Koreas (with a strike force of tweets and threats accompanying it).

And there's obviously more to come: potentially many more troops, even an army of them, for Syria; a possible mini-surge of troops into Afghanistan (that MOAB strike may have been a canny signal from a U.S. commander "seeking to showcase Afghanistan's myriad threats" to a president paying no attention); a heightened air campaign in Somalia; and that's just to start what will surely be a far longer list in a presidency in which, whether or not infrastructure is ever successfully rebuilt in America, the infrastructure of the military-industrial complex will continue to expand.

Institutionalizing War and Its Generals

Above all, President Trump did one thing decisively. He empowered a set of generals or retired generals -- James "Mad Dog" Mattis as secretary of defense, H.R. McMaster as national security adviser, and John Kelly as secretary of homeland security -- men already deeply implicated in America's failing wars across the Greater Middle East. Not being a details guy himself, he's then left them to do their damnedest. "What I do is I authorize my military," he told reporters recently. "We have given them total authorization and that's what they're doing and, frankly, that's why they've been so successful lately."

As the 100-day mark of his presidency approaches, there's been no serious reassessment of America's endless wars or how to fight them (no less end them). Instead, there's been a recommitment to doing more of the familiar, more of what hasn't worked over the last decade and a half. No one should be surprised by this, given the cast of characters -- men who held command posts in those unsuccessful wars and are clearly incapable of thinking about them in other terms than the ones that have been indelibly engrained in the brains of the U.S. military high command since soon after 9/11.

That new ruling reality of our American world should, in turn, offer a hint about the nature of Donald Trump's presidency. It should be a reminder that as strange... okay, bizarre... as his statements, tweets, and acts may have been, as chaotic as his all-in-the-family administration is proving to be, as little as he may resemble anyone we've ever seen in the White House before, he's anything but an anomaly of history. Quite the opposite. Like those generals, he's a logical endpoint to a grim process, whether you're talking about the growth of inequality in America and the rise of plutocracy -- without which a billionaire president and his billionaire cabinet would have been inconceivable -- or the form that American war-making is taking under him.

When it comes to war and the U.S. military, none of what's happened would have been conceivable without the two previous presidencies. None of it would have been possible without Congress's willingness to pump endless piles of money into the Pentagon and the military-industrial complex in the post-9/11 years; without the building up of the national security state and its 17 (yes, 17!) major intelligence outfits into an unofficial fourth branch of government; without the institutionalization of war as a permanent (yet strangely distant) feature of American life and of wars across the Greater Middle East and parts of Africa that evidently can't be won or lost but only carried on into eternity. None of this would have been possible without the growing militarization of this country, including of police forces increasingly equipped with weaponry off America's distant battlefields and filled with veterans of those same wars; without a media rife with retired generals and other former commanders narrating and commenting on the acts of their successors and prote'ge's; and without a political class of Washington pundits and politicians taught to revere that military.

Related Topic(s): Presidency, Add Tags
Add to My Group(s)
Go To Commenting
The views expressed herein are the sole responsibility of the author and do not necessarily reflect those of this website or its editors.