Reprinted from thegrayzone.com by Unknown 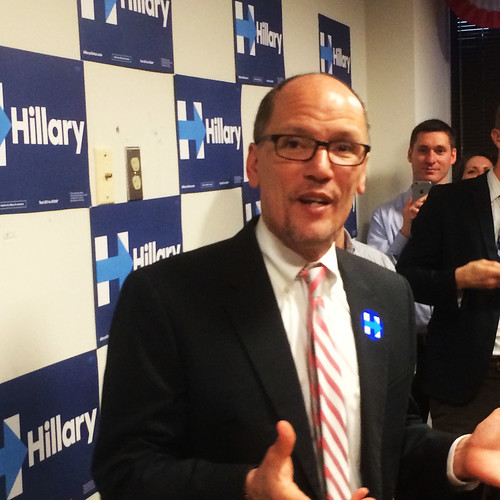 Many of Perez's nominees are vocal opponents of Senator Bernie Sanders and spoke out against his campaign when he challenged Hillary Clinton for the nomination in 2016.

Just as it did in 2016, the DNC appears determined to sabotage a Sanders nomination, foisting a collection of neoliberal and imperialist hacks onto the convention committee to hold back a popular rebellion against the policies of endless war and corporate free trade they have personally presided over.

Let's examine some of the individuals. I'll initially focus on the nominees for the DNC Platform Committee.

Only a small percentage of those on the roster, such as Communications Workers of America President Larry Cohen, are even remotely aligned or sympathetic to Sanders' progressive agenda, and many of them are 2020 superdelegates.

Though the Democratic Party reduced the influence of superdelegates after a backlash from Sanders supporters, more than 700 superdelegates will be able to vote as part of a brokered convention if the Vermont senator is not the nominee after the first ballot. They would not have to vote for Sanders, even if he won a majority of pledged delegates in their state's caucus or primary.

Sanders could secure enough pledged delegates to win on the first ballot and still find his agenda thwarted by the standing committees. For example, members of the DNC's Platform Committee beholden to corporate interests could vote against measures including Medicare For All or a ban on natural fracking in the agenda of policies they plan to fight for in 2020.

A close look at the list Perez issued offers a gruesome vision of morally repugnant operatives rigging the game on behalf of a desperate and increasingly discredited party elite.

Denis McDonough was nominated to chair the Platform Committee. He was Obama's chief of staff during his second term. McDonough is senior principal for the Markle Foundation and a chair of the Rework America Task Force.

Acting on behalf of the CIA, McDonough pushed for more redactions in the torture report summary that was ultimately released by the Senate Select Committee on Intelligence. He was a close ally of CIA Director John Brennan and fought for Brennan when the Senate delayed his nomination over his past support for torture. He also advised Obama on how to develop the drone program, which involved a kill list of alleged terrorism suspects to be assassinated extrajudicially.

Kevin Gosztola is managing editor of Shadowproof Press. He also produces and co-hosts the weekly podcast, "Unauthorized Disclosure." He was an editor for OpEdNews.com
Related Topic(s): 2020 Democratic Convention; DNC Chairman; DNC Credentials Committee; DNC Rules Committee; Democrats DNC; Primary Interference; Tom Perez, Add Tags
Add to My Group(s)
Go To Commenting
The views expressed herein are the sole responsibility of the author and do not necessarily reflect those of this website or its editors.