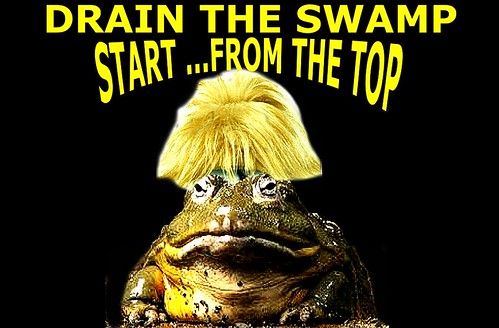 D trump frog bad hair day drain the swamp
(Image by Ban Long Line Ocean Fishing)   Details   DMCA
I don't buy the argument that Trump has been trying to take on the powers that be/establishment or fight the system and drain the swamp, as others, like Paul Craig Roberts claim.

Trump has done nothing along those lines and, to the contrary, appointed two SCOTUS justices who will protect the PTB and establishment He has appointed many wealthy insiders who will protect the system and expose American assets to extraction and exploitation. He has pushed for eliminating regulations that protect consumers and the environment, further serving the corporate establishment.

I don't blame people, before Trump began his presidency, for having hope that Trump could fight the deep state and the powers-that-be system, that he would drain the swamp, as he'd promised. But Trump has not delivered. You might say he was stymied, but he had the Republicans in control of the House and Senate and still did nothing, outside of approving a tax break that went 85% to the wealthy. And he has added many more slimy miscreants who are part of the problem, part of the system, to the swamp, rather than draining it.

I would argue that it was either Trump's failure or, even more likely, he never intended to keep his promises. Trump is a grotesque, malignant narcissist psychopath and he makes his decisions based on how they serve him and him alone. Anyone who still believes that he "deserves a chance" is deluding his or herself.

I believe that the Democrats are doing the right thing, investigating Trump under the rubric of impeachment. I'm not sure that removing him is the best thing for two reasons. One, it will fuel those who claim that impeachment is coup. It is not. He has violated the constitution, breaking laws. But removing him will probably make it more likely that the Democrats will lose in 2020, since then, the GOP will field stronger candidates who do not evoke the disgust Trump does. And if there's any chance of doing something about the neoliberal, imperialist, corporatist rigged system that exists, it will be by electing Bernie Sanders, Tulsi Gabbard or Elizabeth Warren, in my order of preference. If the Democratic leadership goes against the tide that is already giving more support to progressive candidates

Bottom-line. Trump is either a failure or a liar and does not deserve a chance to continue. If you believe that he can or will do anything about the system or Russia, you are entertaining a fantasy unsupported by reality or past performance.

Related Topic(s): Draining The Swamp; Powers That Be; Time To Impeach; Trump Impeachment, Add Tags
Add to My Group(s)
Go To Commenting
The views expressed herein are the sole responsibility of the author and do not necessarily reflect those of this website or its editors.