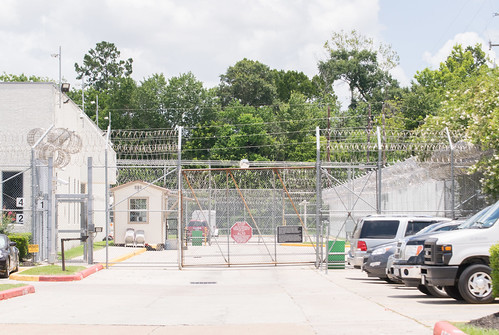 Profiting from Criminalized Immigration 1806241325
(Image by Patrick Feller)   Details   DMCA
There is not a jail within Capitol Hill. But there should be. Nancy Pelosi should use some of the space in one or more of the buildings. When subpoenaed witnesses refuse to testify they should be put in the jail. If they refuse to appear, they should be arrested for contempt of Congress and jailed.

Now here's the fun part. Model the jail after the facilities Trump has set up to hold people attempting to come into the United States. There's no reason to make people who demonstrate contempt of Congress particularly comfortable. They should not be made comfortable. They should be given punishment that motivates them to cooperate. As soon as they start answering questions they can be released.

Nancy Pelosi has said that she doesn't want to create a jail situation that is overcrowded. But that was back in May. It looks like a Capitol Hill prison could become crowded fairly quickly. Then again, I don't think the people being called to testify are very tough. I don't think they could handle the treatment they are subjecting people trying to enter the US are being given.

Any policy set regarding jailing witnesses who refuse to show up or answer questions must be designed so they are bi-partisan in nature, meaning that either side should be able to assume that though firm, the policies are fair. That means that a person who sits and answers questions will not be jailed. It also means that lying to congress should have serious consequences, including jail.

People, including Paul Craig Roberts, are arguing that the hearings are political. I've argued that one purpose of holding hearings aimed at proving corruption is to influence the elections. I'll agree that that is political. But casting light on corruption is also about justice. If justice has political effects, so be it. It is ironic that those on the right find a political aspect to the hearings to be outrageous. After all, the Republicans engaged in impeachment of Bill Clinton for entirely political reasons. Any other explanation is ludicrous.

The Trump administration's appointees have been selected for loyalty to Trump over loyalty to the United States. It will take creation of a jail to enforce the cooperation with congress that is necessary to get to the truth. If Pelosi hires the same companies that build the facilities at the border, for children, I'm sure they can be up and running in a matter of a week or two.

I'd like to see them start populating the jail with William Barr and Mike Pompeo. Giuliani will overflow with testimony.

Related Topic(s): Capitol Hill; Prisons - Penal System; Subpoena Contempt; Testify, Add Tags
Add to My Group(s)
Go To Commenting
The views expressed herein are the sole responsibility of the author and do not necessarily reflect those of this website or its editors.