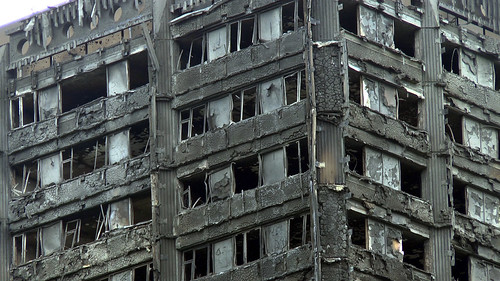 There are many people culpable for the mass loss of life in the Grenfell fire in London. At this time, we know enough about the fire and its causes to be able to discuss these matters with sufficient confidence to draw preliminary conclusions. As always, we should also keep in mind that we do not have all the facts so some of our conclusions must be tentative.

I do not focus on Tony Blair and Gordon Brown because they are uniquely culpable for the mass deaths in the fire. Their failures are important to explaining several points that are often unclear to Americans. First, Blair and Brown, as leaders of the Labor Party, were supposed to protect poorer citizens like those living in the tower blocks through effective health and safety regulation. Historically, that would have been a top priority of the Labor Party. Second, the reality is that Blair and Brown were aggressively hostile to health and safety regulation and that hostility exemplifies the radical transformation that "New Labor's" leaders made to the party. Third, Blair and Brown modeled New Labor on Bill and Hillary Clinton and Al Gore's transformative policies when they led the New Democrats. The New Democrats' most radical political change was their hostility to the white working class, but their most radical policy change was their unholy war against effective health and safety regulation through the infamous "Reinventing Government" campaign. Fourth, the revulsion of much of the Labor Party's base and the New Democrats' base to these twin radical changes in political identification and policy in which the historical parties of the workers turned against the workers led to initial electoral success followed by severe defeats.

Jeremy Corbyn's success as the darkest of dark horse candidates to become Labor's leader and Labor's gains in the most recent election have stunned British elite commentators (and the far smaller number of Americans who follow UK political events closely). To say that Corbyn is to the left of Blair and Brown is to mislead by inadequacy. Corbyn is vastly to the left of Blair and Brown. Corbyn is very far to the left of Bernie Sanders and Corbyn favors policies and alliances that would be instantly fatal for an American elected official's political career. Until the recent election results, dissent rules the Labor Party, with the great bulk of its leadership eager to knife Corbyn. Corbyn's sharp break with Blair and Brown's unholy war against regulation explains why so much of his Party's leadership is eager to remove him from leadership. It also explains why his policies have led large numbers of younger voters to join the Labor Party and support Corbyn. Similarly, Sanders and Senator Elizabeth Warren's popularity, particularly with younger voters, has repeatedly stunned the New Democrats' leaders. The easily avoidable loss of so many in the Grenfell fire illustrates why Corbyn's supporters have rallied passionately to what they see as the antithesis of New Labor leaders like Blair and Brown.

Here are the key facts that we know relevant to this article. The Telegraph described them in a June 16, 2017 article entitled: "Eight failures that left people of Grenfell Tower at mercy of the inferno." The building was inherently unsafe with regard to fire danger. The article begins with this damning introduction.

A litany of failings in building regulation and safety rules have left residents in tower blocks vulnerable for decades. Despite constant warnings from fire experts, nothing was done to improve fire-proofing standards, or even review the current situation.

Grenfell was a multi-story residential tower with no sprinkler system and only one stairway allowing escape from a fire. In British parlance, it was a "tower block." In reality, it was a death trap.

Margaret Thatcher's government removed a building standard requiring that the exterior be fire resistant. That removal was obscene and indefensible, but it also begs this question of the "councils" in charge of the many tower blocks in the UK -- what could possibly lead you to fail to make the building exterior highly fire resistant? Many of the building measures that provide a building long life expectancy also produce strong fire resistance, so it is a horrific to choose to fail to make a large housing structure strongly fire resistant. The same manufacturer that sold the Grenfell council flammable cladding sells non-flammable cladding -- at a tiny price differential. Grenfell could have installed the non-flammable cladding for 5000 pounds in additional expense.

After Thatcher removed the essential safety regulations, the councils actively made things far worse -- in the face of repeated warnings that they were putting the tenants' lives at grave peril. The councils did not simply install exteriors with inadequate fire resistance -- they installed exteriors that greatly increased the risk of the rapid expansion of a fire. They did so by adding insulating "cladding" in order to reduce heating and cooling operating costs. They chose to add flammable insulation rather than the non-flammable alternative.

There were multiple problems with the cladding. The metal was thin, to reduce costs, which meant it would burn through very quickly in an intense fire. The insulating material was flammable and it produced toxic smoke when it burned. The cladding accelerated and spread the fire by acting like a chimney and allowing droplets of the burning insulating materials to fall and ignite secondary fires.

Public officials, particularly fire fighters, and independent experts repeatedly warned the councils and senior government officials that the cladding would spread intense fires rapidly rather than retarding them.

For the past three decades fire safety experts have warned that the 'Class O' designation was based on small-scale tests conducted in laboratory conditions and did not properly evaluate cladding in a live fire.

A recent London Fire Brigade investigation into the fire at a tower block fire at Shepherd Court in West London in August 2016 found that external cladding had helped the fire to spread.

They found that when exposed to high flames the metal sheet of the cladding had melted away, setting the inner polystyrene foam on fire and allowing 'flaming droplets' to fall onto lower floors while helping flames to spread higher up. Fire chiefs wrote to every council in London to warn them of the dangers but no action was taken.

A leading fire safety expert warned Government advisors three years ago that a tragedy like the Grenfell Tower inferno would happen unless they changed rules to ban cheap, flammable insulation used on the outside of buildings.

William K Black , J.D., Ph.D. is Associate Professor of Law and Economics at the University of Missouri-Kansas City. Bill Black has testified before the Senate Agricultural Committee on the regulation of financial derivatives and House (more...)
Related Topic(s): Grenfell Tower Fire; Tony Blair, Add Tags
Add to My Group(s)
Go To Commenting
The views expressed herein are the sole responsibility of the author and do not necessarily reflect those of this website or its editors.