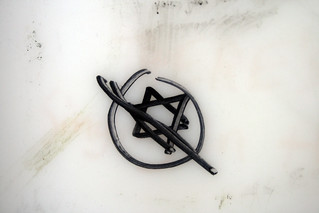 ANTI-SEMITES make me laugh. They are so funny.

I know that many will consider this statement frivolous, if not obnoxious, considering all the terrible things committed by anti-Semites throughout the ages, including the Holocaust. But nowadays, they are just ridiculous.

TAKE THE ex-mayor of London, Ken Livingstone. The things he says are ridiculous indeed. Even for a politician.

For example, he said the Adolf Hitler was a Zionist, or a lover of Zionists.

Adolf Hitler was a pathological hater of Jews and everything Jewish. Indeed, his anti-Semitism was so central to his beliefs, that it overcame everything else.

Staring into the face of final military defeat, he still diverted trains from essential military tasks in order to transport Jews to the annihilation camps.

Some believe that he lost the war (and world domination) because of his anti-Semitism. If the Jewish scientists -- like Albert Einstein -- had remained in Germany as German patriots, Hitler may well have got the atomic bomb before the Americans. This would have changed world history.

No one knows where his hatred for Jews came from. He liked the Jewish doctor of his adored mother. When he was nursing his dream of becoming a great painter, he had a Jewish friend and visited him at his home. Somewhere on his way he became an abysmal Jew-hater. Theories abound, but there is no definitive answer. But it happened early on, when he was still in Vienna.

The idea that this person could, at any stage, be a lover of Zionist Jews is absurd beyond imagination.

LIKE MANY absurdities, this one contains a kernel of truth.

Before the Holocaust, anti-Semites wanted to drive the Jews out of Europe. The essence of Zionism is to get the Jews from all over the world to Eretz Israel (Palestine). So these two extremely opposite movements had something in common.

Theodor Herzl, the founder of the Zionist movement, realized this right from the beginning. He went to anti-Semitic Czarist Russia to convince leading politicians there to help him, promising to relieve them of their Jews.

In the course of time, many such efforts were made. A little-known one was made on the eve of World War II, when the right-wing Zionist Irgun underground (full name: National Military Organization) came to an agreement with the anti-Semitic leadership of the Polish army. Military training centers for young Jews were set up in Poland, with the idea of preparing them for an invasion of Palestine, so that Polish Jews could go there. The war cut these efforts short.

Related Topic(s): Anti-semitism; Hitler; Holocaust; Zionism, Add Tags
Add to My Group(s)
Go To Commenting
The views expressed herein are the sole responsibility of the author and do not necessarily reflect those of this website or its editors.