I never thought I'd be writing an article rebuking Thom Hartmann. I generally find him knowledgeable, articulate, and in most senses genuinely progressive. So much so that I've posted articles of his all around Facebook, because he forcefully expressed thoughts I doubt I could have framed as well. In fact, a Facebook political ally, manager of an unimpeachably progressive political page, recently upbraided me for a Hartmann post, charging he shilled for Obama in both relevant elections. 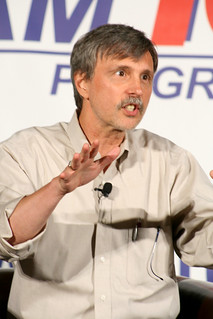 Thom Hartmann--Too soft on Democrats--that's why some letters of .PROGRESSIVE. are missing.
(Image by Paul Schultz)   Details   DMCA

Hartmann's recent--and highly popular--OpEdNews article (http://www.opednews.com/articles/Republicans-Insane-Politi-by-Thom-Hartmann-Congress_Party-Politics-Republican_Political-Mudslinging_Political-Nutcase-Psychos-140514-853.html) makes me wonder if my friend had been right. However, before attacking the sinister side of that article, I must stop to duly acknowledge its considerable merits. For if I'd said that Hartmann's OEN piece struck me as a piece of utter trash I would, in the first place, have been lying; but more importantly, I would have ruined all credibility with the many intelligent progressives who--like myself, moreover--see merit in it. Hartmann tells one side (and regrettably, only one side) of an important story with eloquence and penetrating insight; indeed, I'd never realized the full extent to which Republicans exploit voters' ignorance by pinning blame on Democrats for the harm they themselves--deliberately and strategically--cause our nation.

Hartmann tells this tale of brilliant--and nauseatingly evil--Republican strategy so well that his article is in one sense a public service. But the extent to which he frames that truthful tale of Republican evil to whitewash Democrats--while facing irrefutable evidence of their own political cancer--lends a seductive, insidious danger to Hartmann's piece. To ward off that danger, I felt compelled to answer Hartmann with my own tale of Democrat's malfeasance--to finish painting the fully truthful, properly informative picture Hartmann should have given us.

But before proceeding, I wish to forestall any possible misimpression: I find Hartmann's portrayal of the cancerous evil that is today's Republican Party fully accurate. In fact, I find no more accurate metaphor for Republicans than a malignant cancer--terminal if unchecked--on America's body politic. But as a "full-spectrum" progressive--a progressive in the Bernie Sanders mold: progressive on social, economic, and peace and justice issues--I find today's Democratic Party, at minimum, a dangerously cancerous patient.

In my diagnosis, only the toxic synergy of a malignant-tumor Republican Party and a cancer-riddled Democratic one could have given us the increasingly fascist oligarchy we now face. A popular--and populist--revolt is essential. And that revolt must call out the toxic evil in both limbs of our deeply dysfunctional duopoly. That Occupy Wall Street occurred under a Democratic president (and, moreover, in response to his perceived betrayal--"Banks got bailed out, we got sold out.") is itself telling evidence Hartmann is deliberately hiding the whole picture. That Occupy Wall Street was brutally crushed under a Democratic president--one who has, moreover, consistently belittled dissent and stealthily fostered the police state needed to crush it--amounts to a virtual indictment of Obama and corporatist Obama Democrats.

If I go so far as to call Hartmann's political strategy of whitewashing Democrats--against a backdrop of black-souled Republicans--insane, it's not merely in catchy parody of his own title. It's because, after the deep betrayal inflicted on progressives by the likes of Barack Obama, it's simply insane to expect progressives to rally in enthusiasm around unrepentant "lesser of two evils" Democrats. Especially when Obama shamelessly packaged himself as a refreshing change not just from the deep-dyed evil of the Bush years, but from the deeply compromised Dems who had in lockstep supported the Iraq war and the USA Patriot Act.

Hartmann writes as if Obama's only fault--which he does consider a grave one--is his failure to call out evildoing Republicans. Doesn't he realize how deeply insulting his glossing over of Obama's far deeper evil is to the very progressives he's trying to motivate? And how can such an intelligent man--unless he is acting as a Democratic Party shill--fail to realize that Obama's failure to call out Republicans is motivated? Motivated, say, by Obama's sharing humungous common ground with those evildoers.

I make no claims to be an investigative reporter, but as a progressive activist with both academic background and keen lifelong interest in political philosophy, I do profess an aptitude for taking the facts unearthed by others and discerning trends and patterns. And one unmistakable pattern is that wherever top-flight progressive experts and opinion leaders have spotlighted key policies as desirable and important, Obama has infallibly chosen the wrong side.

Thus, if we take the size of economic stimulus, protection of Social Security, Medicare, and unemployment benefits, reform of banking and finance, and support for a public option in health care, Obama has repeatedly rejected outright the advice of progressive heavyweight economists like Paul Krugman and Joseph Stiglitz. Indeed, progressive financial investigative journalists like Matt Taibbi or Greg Palast have repeatedly documented how aggressively Obama's handpicked appointees, zealously protecting Wall Street, have thwarted the very types of progressive reform Krugman and Stiglitz recommend. It's hardly surprising Obama's former Treasury Secretary Tim Geithner, a man of impeccable Wall Street pedigree, has, in his self-justifying recent book Stress Test, defended the bank bailouts while savaging such defenders of Main Street interests (quite isolated at the time) as Neil Barofsky and Elizabeth Warren.

(Tellingly, former FDIC chair Sheila Bair, in her review of Geithner's book, stresses that one of Geithner's purposes--besides self-justification--seems to be preparing the public for the inevitability of more bank bailouts. Such is the success of Obama's financial "reforms.")

On peace and justice issues, Obama is about as perverse and disgusting as it gets. Beyond merely breaking his promise (often repeated, but never very serious) to investigate the Bush administration for war crimes like torture and for illegal surveillance, Obama's Justice Department has actually proactively stepped up to shield these prima facie war criminals (all the evidence points that way) from prosecution. Worse yet, he has vigorously prosecuted whistleblowers like Chelsea Manning for unveiling war crimes committed by U.S. soldiers, while letting the perpetrators--to say nothing of the Bush "brain trust" who lied us into an illegal aggressive Iraq war--walk free. Still worse, Obama, beyond the "war by proxy" of legally questionable drone strikes, has seized the Bush neocon playbook and distorted on-the-ground facts to push for unjust war in Syria and to risk war--with nuclear power Russia, to boot--over a crisis he himself provoked (by funding neo-Nazi dissidents) in the Ukraine. Yet this is the president whose major flaw, if we believe Hartmann, is failing to call out Republicans!

If we seek a single vignette to capture Obama's cold-blooded evil on peace and justice issues in a nutshell, nothing serves as well, to my mind, as Jeremy Scahill's expose (which I viewed on Democracy Now: http://www.democracynow.org/2013/7/25/yemeni_reporter_who_exposed_us_drone ) about prominent Yemeni journalist Abduleleah Haider Shaye, whom Obama insisted be jailed on terrorism charges for the sole "crime" of accurately reporting 41 deaths--including 14 women and 21 children--in a 2009 U.S. drone strike. This modern real-life story of unrepentant injustice and unmitigated evil forcefully reminds me of the Biblical tale of King David and Bathsheba, where David, solely to hide an adulterous affair with Bathsheba that left her pregnant, demands that her husband Uriah return to her from the battlefield to confuse the paternity issue. When Uriah repeatedly refuses, David, radically compounding his injustice, issues orders (1) sending Uriah to the front lines of battle and (2) having his fellow soldiers abandon him--essentially arranging his murder. Perhaps Obama did his killing (arguably murder) first, but the parallel--of two powerful rulers covering up disgraceful injustice by further cold-blooded injustice again an innocent man--could not be more exact.

Although my previous evidence should suffice to prove Obama a cancer to progressives--all the more malignant for his presidency making him head honcho of the Democratic Party--it by no means ends his indictment (or Democrats'). In a nation proven a virtual oligarchy by two high-powered academic studies--those of French economist Thomas Piketty and U.S. political scientists Martin Gilens and Benjamin Page--the last thing America needs is international trade agreements exclusively favoring the corporate rich. For any true progressive, the perverse U.S. job-killing and wage-lowering effects of NAFTA should have been warning enough.

Yet predictably (for any progressive who's closely followed Obama), he's chosen the most perverse imaginable position on not one, but two, trade agreements so wide-ranging in their impact that they've been aptly dubbed "NAFTA on steroids." Obama has greedily embraced the role of head cheerleader for both the Trans-Pacific Partnership (TPP) and its European analog, the Transatlantic Trade and Investment Partnership (TTIP), two highly secretive trade agreements whose level of secrecy--based on everything leaked partial drafts have shown us--is directly proportional to the grievous harm they inflict on average Americans. And predictably, Obama's again brazenly flipping off progressives in his "trademark" style: the hush-hush secrecy of current trade negotiations is a bald-faced betrayal of Obama's endless vows to run "the most transparent administration in history." The same that has unprecedentedly abused the antiquated World War I Espionage Act to savagely persecute whistleblowers, and that has outdone itself--not just in Yemen but domestically--to make journalism itself a crime.

Even Thom Hartmann agrees that the indefinite-detention provisions of the National Defense Authorization Act--zealously defended by Obama's administration--are a radical attack on U.S. liberties under the Constitution and on the very future of journalism itself. I have to suspect, even for Hartmann, his endangered right to practice journalism outweighs his deep vested interest in waving pom-poms for Team Blue.

One deeply sinister aspect of Obama's beloved trade agreements, along with our government's ongoing process of dismantling the Constitution, convinces me that Democrats' malignant cancer extends well beyond Obama. Of course, one could easily cite Hillary Clinton, whose known credentials for betraying progressives are far more extensive, pre-presidency, than those of the relatively unknown candidate Obama; since hubby Bill's plutocrat-friendly reign, her immediate family has enriched itself immensely, ostensibly as reward for his policies. And one could also cite Dianne Feinstein, hypocritical lackey of the U.S. surveillance state, concerned about spying only when, to her indignant shock, it affected her august self. But that the TPP and TPIP aim to hamstring environmental action--with humanity's very survival at stake--paints those treaties, as well as Democrats, at their most sinister.