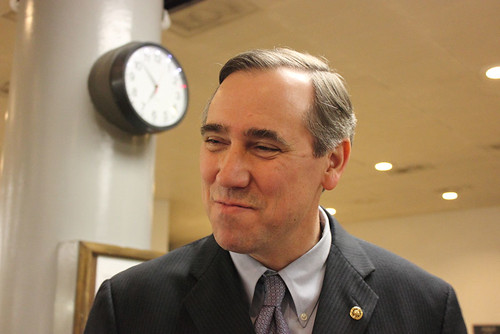 Advise and consent on executive appointments. It's literally the U.S. Senate's job to thoroughly review nominees.

Instead, Republicans are rushing ahead with deeply-flawed Supreme Court nominee Brett Kavanaugh, who should have been disqualified long ago. And they're refusing any serious investigations into the allegations against him and a deep review of his record.

I've seen the recent, supplementary FBI report on the into Brett Kavanaugh. This secretive "investigation" was a sham.

The White House prevented the FBI from interviewing at least 28 witnesses with the potential to corroborate stories of Kavanaugh's abuse. They hid hundreds of thousands of pages of records from his work for President Bush from the Senate and the public.

The White House has gone to unprecedented lengths to hide Brett Kavanaugh from scrutiny. And, despite those efforts, it's clear why: he fails nearly every test for a lifetime appointment to the Supreme Court.

Brett Kavanaugh fails every test of what we look for in a Supreme Court justice. That's why I'm voting ABSOLUTELY NOT on his nomination, and why I'm suing Donald Trump to stop a Senate vote before a full, real investigation is completed.

This is a railroaded confirmation of a deeply flawed nominee after a process of unprecedented obstruction and obfuscation. America deserves better.

US Senator from Oregon

Related Topic(s): Christine Blasey Ford; Federal Agency FBI; Judge Brett Kavanaugh; Kavanaugh Confirmation, Add Tags
Add to My Group(s)
Go To Commenting
The views expressed herein are the sole responsibility of the author and do not necessarily reflect those of this website or its editors.

This secretive "investigation" was a sham