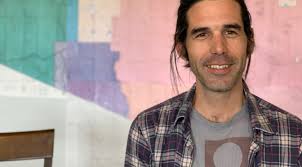 Today's Gospel selection, the familiar story of the Good Samaritan, couldn't be timelier.

It's read at a juncture in American history, where a Christian acting specifically according to the teaching of Jesus' parable faces 20 years in prison. His crime? He provided food, water, lodging and hospitality to people whom the Trump administration would rather see die of thirst and exposure, because the president considers them sub-human.

I'm talking about Dr. Scott Warren (pictured above), a humanitarian aid volunteer and immigration rights activist. For years, he has worked with an organization called No More Deaths (NMD). Its members leave water jugs, clothing, and medical supplies for refugees and immigrants crossing the Sonoran Desert in southern Arizona. Warren and NMD also keep track of the numerous cadavers they find there and have filmed U.S. border agents emptying more than 3000 NMD water jugs in their clear effort to create more deaths by dehydration. Already, more have died where NMD works than were killed in the 9/11 attacks and Hurricane Katrina combined.

In other words, those border agents are the sadistic executioners who staff Mr. Trump's concentration camp system. (Watch what they do in this film clip. Doesn't their sadism remind you of the Nazis we've all seen in all those WWII movies?)

Coincidently, I guess, and soon after filming the murderers, Warren was arrested and tried for aiding two undocumented migrants. A hung jury failed to convict him. However, the Trump administration wants the man retried -- again for the crime of obeying Jesus' mandate in today's reading. (In fact, most reports of Warren's case specifically invoke the imagery of "the Good Samaritan.") His second trial will take place in November.

The sad irony is that so many of Trump's supporters consider themselves Christians. Their single "Christian" issue seems to be abortion about which Jesus and the Bible in general says absolutely nothing. Nothing at all! And yet, when someone obeys Jesus' clear and unambiguous teaching as in today's Gospel, they want Jesus' follower punished to the full extent of the law whose essence Moses describes as Love in today's first reading.

It's like what happened in Germany after Hitler came to power. There, the birthplace of Luther and his Reformation, Christians not only enthusiastically approved of der Fuhrer; they worked in his concentration camps. And then (as Elie Wiesel puts it) after cremating Jews all week, they went to confession on Saturday and received communion on Sunday. They could do so, because, mirroring Trump's attitude towards immigrants, they believed Jews were sub-human.

That's the same attitude Jews themselves in Jesus' day had towards Samaritans. They were considered enemies of the state, because their ancestors back in the 8th century BCE, had intermarried with Assyrian occupiers of the Jewish homeland. Intermarriage rendered Samaritans unclean. They were as sub-human as Trump's immigrants or Hitler's Jews.

So Jesus' making a Samaritan the hero of his challenging parable, and contrasting the outcast's compassion with the "couldn't-care-less" attitude of professional holy men, the priest and the Levite, connects directly with the hypocrisy of Christians, the Trump administration, and those border agents all of whom have criminalized the fundamental human right of immigration.

No; I'm wrong: they've actually criminalized God's law of love as described throughout today's liturgical readings. Read them for yourself here. In any case, what follows is my "translation" of their main ideas:

The Great Liberator, Moses
Exhorted the former slaves
To return to LOVE

The most obvious, uncomplicated

Related Topic(s): Bible; Compassion; God; Good Samaritan; Immigrants; Jesus; Love; Moses; Nazis; Refugees; (more...) Samaritans Purse; Sunday, Add Tags  (less...)
Add to My Group(s)
Go To Commenting
The views expressed herein are the sole responsibility of the author and do not necessarily reflect those of this website or its editors.