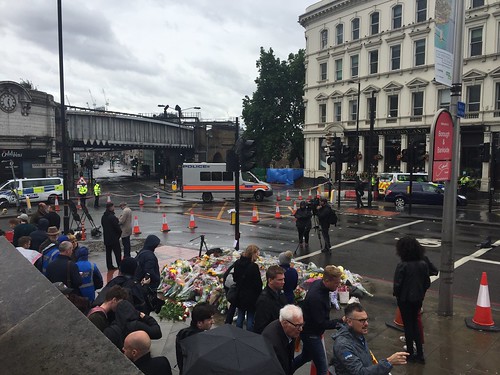 Theresa May's response to the upsurge of violence that has hit Britain since the beginning of 2017 will fail for one fundamental reason: she refuses to hold her own government to account for its systematic incubation of extremism.

"As I said here two weeks ago, there has been far too much tolerance of extremism in our country over many years -- and that means extremism of any kind, including Islamophobia," said the Prime Minister, hours after a 47-aged man, Darren Osborne, ploughed a van into Muslim worshippers outside the Finsbury Park mosque.

This was the fourth terrorist attack in the UK over the last three months. The first was the attack outside parliament; the second was the Manchester suicide bombing at the Ariana Grande concert; the third came in the form of van and knife attacks in London Bridge.

May's welcome recognition that Islamophobia is a form of extremism was muddied by her proposed solutions.

May's welcome recognition that Islamophobia is a form of extremism was muddied by her proposed solutions: a package of draconian powers including new anti-terror powers for police and security services; the creation of a new statutory body, a Commission for Countering Extremism (CCE); and more stringent internet controls.

Conservative Party sources familiar with the proposals have said that the new anti-terror offences would allow police to target extremists who endorse "radical views but stop short of advocating violence".

In other words, the Tories want the power to police our thoughts so they can criminalise 'extremist' ideas which don't endorse violence.

But the absurd consequences of such amorphous definitions of 'non-violent extremism' have already occurred under Prevent, the government's domestic counter-extremism programme. Even normal students have been labelled by police as being 'at risk' of "domestic extremism" just for "attending protests, sympathising with occupations and making demands on issues such as a living wage for university staff and an ethical investment policy."

The CEE, whose planned role would be to identify extremists, counter their messages and promote pluralistic values, would be hopelessly hobbled under such an amorphous conception of extremism.

The Tories want the power to police our thoughts so they can criminalise 'extremist' ideas.

And extending such thinking into internet regulation threatens forms of censorship that could empower an already unaccountable security establishment -- the result would be expanded mass surveillance that would routinely red-flag people sceptical of government, but be useless in identifying real terrorists.

Yet the unsuspecting British public is largely unaware of the fact that Theresa May's proposals will do nothing -- literally nothing -- to address the fundamental drivers behind the incubation of violent extremism in Britain.

Tory Party sources claim that the proposed new anti-terror powers would have made it easier to prosecute the likes of Anjem Choudary and his followers.

Dr Nafeez Ahmed is an investigative journalist, bestselling author and international security scholar. A former Guardian writer, he writes the 'System Shift' column for VICE's Motherboard, and is also a columnist for Middle East Eye. He is the winner of a 2015 Project Censored Award for Outstanding Investigative Journalism for his Guardian work.

Related Topic(s): British Prime Minister Theresa May; Islamaphobia; United Kingdom England, Add Tags
Add to My Group(s)
Go To Commenting
The views expressed herein are the sole responsibility of the author and do not necessarily reflect those of this website or its editors.

How the CIA made Google

The Great Unravelling: Tunisia, Egypt and the Protracted Collapse of the American Empire

Hitchens Has No Clothes: A Response to 'Vidal Loco'