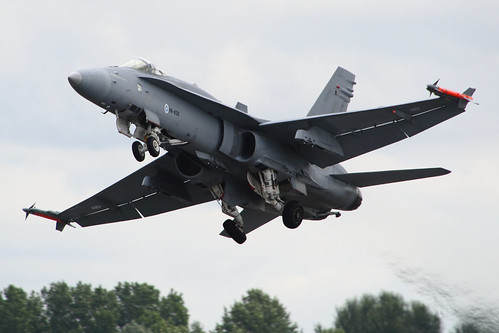 Despite polls that suggest most Canadians do not support warplanes used to kill and destroy things around the world, the federal government seems determined to spend tens of billions of dollars to expand that capability. While there is a growing movement afoot to block the Liberals' fighter jet purchase, it will require significant mobilization to overcome the powerful forces seeking cutting edge new warplanes.

At the end of July Boeing (Super Hornet), Saab (Gripen) and Lockheed Martin (F-35) submitted bids to manufacture fighter jets for the Canadian Air Force. The sticker price for 88 new warplanes is $19 billion, but the full lifecycle cost of purchasing the jets will likely top $40 billion.

In response to the government moving forward with the planned warplane purchase, a campaign has taken off to oppose the massive government outlay. There have been two days of action at two dozen MPs offices against the warplane purchase, which is planned for 2022. Hundreds of individuals have sent emails to all MPs on the issue and a recent Canadian Foreign Policy Institute and World BEYOND War webinar pierced parliamentary silence on the planned fighter jet purchase. The October 15 "Challenging Canada's $19 Billion Warplane Purchase" event included Green Party MP and foreign critic Paul Manly, NDP defence critic Randall Garrison and Senator Marilou McPhedran as well as activist Tamara Lorincz and poet El Jones. Manly spoke out directly against the fighter jet purchase and recently raised the issue during Question Period in the House of Commons (Green leader Annamie Paul echoed Manly's opposition to the purchase in a recent Hill Times commentary). For her part, McPhedran suggested more sensible priorities for the large sums devoted to the warplane procurement. A noted anti-Palestinian, Garrison equivocated. He said the NDP opposed purchasing the F-35 but was open to purchasing some other bombers depending on industrial criteria.

The no warplane campaign should take heart from a recent Nanos poll. Bombing campaigns were the least popular of eight options offered to the public when asked "How supportive, if at all, are you of the following types of Canadian forces international missions." Only 28% supported "Having the Canadian Air Force involved in airstrikes" while 77% of those polled backed "Participating in natural disaster relief abroad" and 74% supported "United Nations peacekeeping mission". Fighter jets are largely useless for natural disasters, humanitarian relief or peacekeeping, let alone a 9/11 style attack or a global pandemic. These cutting-edge new planes are designed to enhance the air force's ability to join belligerent US and NATO bombing campaigns.

But, using the military to support NATO and allies was also a relatively low priority of those polled. Asked by Nanos "In your opinion, what's the most appropriate role for the Canadian Armed Forces?" 39.8% chose "Peacekeeping" and 34.5% "Defend Canada". "Support NATO missions/allies" received the backing of 6.9% of those polled.

The no fighter jet campaign should link the $19 billion warplane purchase to Canada's recent history of participating in US-led bombings such as Iraq (1991), Serbia (1999), Libya (2011) and Syria/Iraq (2014-2016). All these bombing campaigns - to varying degrees - violated international law and left those countries worse off. Most obviously, Libya remains at war nine years later and violence there spilled southward to Mali and across much of Africa's Sahel region.

The no fighter jets campaign is also right to highlight warplanes contribution to the climate crisis. They are carbon-intensive and purchasing a fleet of expensive new ones is completely at odds with Canada's stated commitment to reach net zero emissions by 2050. During the 2011 bombing of Libya, for instance, Canadian jets burnt 14.5 million pounds of fuel and their bombs destroyed the natural habitat.

Most Canadians have no idea about the scope of the air force and military's ecological destruction. To mark Disarmament Week NDP MP Leah Gazan recently asked on Twitter "Did you know that according to the 2017 Canadian Armed Forces Defence and Environment Strategy, all military operations and activities are EXEMPT from national emission reduction targets!!??"

DND/CF is the single largest emitter of greenhouse gases in the federal government. In 2017 it released 544 kilotons of GHGs, 40 percent more than Public Services Canada, the next largest emitting ministry.

While the background issues and polling numbers suggest campaigners are well placed to mobilize public opinion against the $19 billion fighter jet purchase, there is still a huge hill to climb. The military and associated industries are well organized and conscious of their interests. The Canadian Forces want new jets and the CF/DND has the largest public relations operations in the country.

There are also powerful corporations set to gain substantial profits off the contract. The two main competitors, Lockheed Martin and Boeing, finance think tanks such as the Canadian Global Affairs Institute and Conference of Defence Associations. All three companies are also members of the Aerospace Industries Association of Canada, which supports the fighter jet purchase. Boeing and Lockheed advertise aggressively in publications read by Ottawa insiders such as iPolitics, Ottawa Business Journal and Hill Times. To facilitate access to government officials Saab, Lockheed and Boeing maintain offices a few blocks from Parliament. They actively lobby MPs and DND officials and have hired retired Air Force generals to top executive positions and contracted retired Air Force commanders to lobby for them.

Scrapping the entire 88 warplane purchase won't be easy. But people of conscience can't sit idly by as huge sums are devoted to one of the most destructive parts of the military, which is among the most damaging elements of our government.

To stop the fighter jet purchase, we need to create a coalition of those who oppose war, are concerned about the environment and anyone who believes there are better uses for our tax dollars. Only by mobilizing large numbers to actively oppose the warplane purchase can we hope to overcome the power of war profiteers and their propaganda machine.

Related Topic(s): Canada Manitoba, Add Tags
Add to My Group(s)
Go To Commenting
The views expressed herein are the sole responsibility of the author and do not necessarily reflect those of this website or its editors.