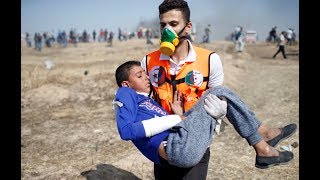 Fathi Harb should have had something to live for, not least the imminent arrival of a new baby. But last week the 21-year-old extinguished his life in an inferno of flames in central Gaza.

It is believed to be the first example of a public act of self-immolation in the enclave. Harb doused himself in petrol and set himself alight on a street in Gaza City shortly before dawn prayers during the holy month.

In part, Harb was driven to this terrible act of self-destruction out of despair.

After a savage, decade-long Israeli blockade by land, sea and air, Gaza is like a car running on fumes. The United Nations has repeatedly warned that the enclave will be uninhabitable within a few years.

Over that same decade, Israel has intermittently pounded Gaza into ruins, in line with the Israeli army's Dahiya doctrine.

The goal is to decimate the targeted area, turning life back to the Stone Age so that the population is too preoccupied with making ends meet to care about the struggle for freedom.

Both of these kinds of assault have had a devastating impact on inhabitants' psychological health.

Harb would have barely remembered a time before Gaza was an open-air prison and one where a 1,000kg Israeli bomb might land near his home.

In an enclave where two-thirds of young men are unemployed, he had no hope of finding work. He could not afford a home for his young family and he was about to have another mouth to feed.

Doubtless, all of this contributed to his decision to burn himself to death.

But self-immolation is more than suicide. That can be done quietly, out of sight, less gruesomely.

In fact, figures suggest that suicide rates in Gaza have rocketed in recent years.

But public self-immolation is associated with protest.

A Buddhist monk famously turned himself into a human fireball in Vietnam in 1963 in protest at the persecution of his co-religionists.

Related Topic(s): Death; Fathi Harb; Hamas; Israel; Palestinian; Self-immolation, Add Tags
Add to My Group(s)
Go To Commenting
The views expressed herein are the sole responsibility of the author and do not necessarily reflect those of this website or its editors.