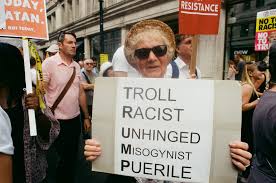 I took a three-month break from blogging. When I reported back to duty, I found the word that says it all.

It is "puerile," which is fully explained on Word Genius, which you may access by clicking here.

We have an abundance of evidence of the suitability of the term puerile , to sum up the behavior of President Donald Trump.

The President faces a near certainty of congressional Impeachment and potential removal from office should a few Senators acknowledge their own puerile lust for holding onto power.

The evidence against Trump piles up daily, starting each dawn with a twitter storm of insults, falsehoods, and cries of self-pity.

Surrounded by headlines that stir anticipation of only the fourth presidential impeachment in American history, we must plow ahead to defend "puerile" as the appropriate word for what led to this moment.

If you have failed to read the link above here it is in part:

Examples of Puerile in a sentence

"The puerile pranks earned the boys a few weeks detention on top of the punishment their parents gave them."

"The older sister was irritated at being forced to wear a puerile outfit to match her sibling in the family photo."

Think of it this way: If a child in your care behaved in an egregious puerile manner would you allow him or her to retain the freedom to continue such behavior?

You would terminate that freedom immediately, if that child had a fully-loaded stolen gun and a twitter account that spewed lies and hatred to an audience in the millions.

This is no time for "grounding," or censure. It is time to terminate that freedom for the sake of this republic...

On the morning I found "puerile," The Chicago Tribune announced the dismissal of McDonald's CEO for having an intimate relationship with one of his employees. His action violated company rules.

Corporations have rules enforced by governing boards. Our country is a nation of laws. We have an impeachment clause enforced by the people through their elected representatives.

No discussion of such matters would be complete without recalling the famous response attributed to Benjamin Franklin at the close of the Constitutional Convention of 1787.

A lady asked him a question as he left Independence Hall on the final day of deliberation.

"Well, Doctor, what have we got -- a Republic or a Monarchy?"

Related Topic(s): Impeachment; Puerile; Removal; Trump, Add Tags
Add to My Group(s)
Go To Commenting
The views expressed herein are the sole responsibility of the author and do not necessarily reflect those of this website or its editors.