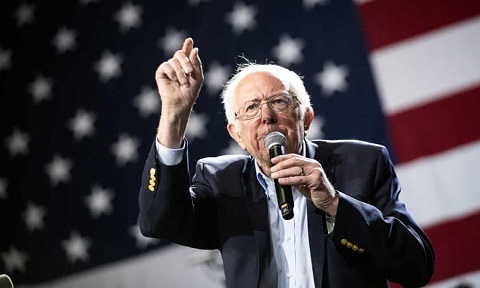 Much happened this week and we can't afford to ignore any of it. The events of the last seven days provide significant opportunities for civic action.

1. Bernie Sanders suspended his peoples' presidential campaign while staying on upcoming primary ballots to acquire more delegates to take to the Democratic convention. He concedes the nomination to Delaware corporatist Joe Biden. But he is determined to use his leverage to get Biden to adopt many important and practical reforms and redirections that would benefit the people instead of greedy big business CEOs. The unsteady Biden needs Sanders voters more than ever in several swing states.

2. The seriously unstable, ill-informed Trump is consumed by his destructive, all-consuming ego. This is no time to have a mindless madman at the helm of our careening ship of state. Each day, Trump spreads lies and misleading information and regularly and repeatedly contradicts himself as well as his honest government scientists and doctors. His delusional fantasies about the COVID-19 pandemic and his boastful role, combined with medical quackery, has led some media to stop broadcasting live his deceptive news briefing to protect the public. He nastily lashes back at criticism, blames, scapegoats and he flatters his easily manipulated sycophants. His delusions of grandeur know no boundson a scale of one to ten, he shamelessly rates his efforts to address the deadly pandemic a "Ten."

When will influential Americans in and outside of Congresscall for his resignation for the sake of the country? For far less erratic behavior, Senate Republicans, led by Barry Goldwater, visited President Nixon in 1974 and told him his time was up. Even stubborn Nixon quit, as do failing prime ministers in other countries.

3. The so-called Republican Party, which has long suppressed voters in minority, low income districts, is seizing on the coronavirus crisis to block more voters they don't like from the polls. Republicans insisted on holding Tuesday's chaotic and health-threatening Wisconsin primary.

Get this: only 5 of 183 voting precincts in Milwaukee were open. The regularly fascistic, gerrymandered Republican legislature refused to heed the Governor's request for postponement, and shopped for Republican judges to support this criminogenic sham enterprise. Get ready for more tyranny in Republican controlled states, like Florida, Ohio, and Arizona in November.

Republicans falsely claim that mail-in voting opens the door to widespread voter fraud. Voting fraud is as rare as whooping cranes. Trump lies about mail-in voting fraud because he knows the higher the voter turnout, the more likely it is he and the Republicans could lose (See: A Short History of Presidential Election Crises: And How to Prevent the Next One by Alan Hirsch, Chair of the Justice and Law Studies program at Williams College).

4. Trump and the Federal Reserve's multi-trillion dollar bailout of recklessly indebted corporations, from Wall Street to Houston, invites waste, commercial crimes, and price gouging. This bailout also opens the door to all sorts of scams harmful to consumers, workers, and the poor. Trump is busy firing his watchdogs and defiantly blocking Congressional efforts to shine bright lights on these massive hand-outs.

The big question is whether smug, profiteering corporate capitalism will come out of the pandemic with an even more control of local, state and federal governments. Will stock buybacks and other reckless practices continue unabated? Will Wall Street be able to avoid accountability for its crimes and misdeeds which triggered the 2008-2009 great recession? Will the taxpayers again be forced to bailout the business fat-cats at the expense of the American people on Main Street?

Less accountability, unrelenting crony capitalism, and weakened labor and consumer rights are on the horizon. It looks as if the voices of the people may again be ignored. Dear citizens, you must politically mobilize to ensure that the 535 members of Congress use their awesome constitutional powers for the public good.

Bernie Sanders is right to call for a people's political revolution to roll back the silent corporate coups d'e'tat. Corporatism has taken over public budgets, destabilized the tax system, and undermined the checks and balances that came out of the American Revolution against monarchical despotism. Corporate control left us totally unprepared and defenseless against pandemics that our public health officials, scientists, and yours truly warned about for years.

The problem is that too many voters have lost confidence in themselves as the sovereign authority in our constitution ("We the People") and did not listen to Bernie Sanders, an honest and dedicated elected U.S. Senator, who has been so truthful and right for forty years.