Ironically, the former guy may help Democrats do what Americans need them to do 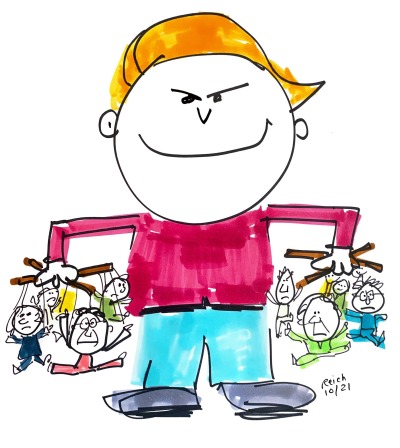 The unofficial kickoff of the former guy's presidential campaign at a rally Saturday night in Des Moines will reverberate through American politics this week. Unfortunately for the GOP, Trump's speech focused on his Big Lie that the 2020 election was stolen rather than on Joe Biden (whose approval ratings are down to 44 percent, because of the Delta variant's continuing impact as well as fumbles at the border and in exiting Afghanistan).

We've already observed it at the state level: Trump's Big Lie has moved 18 Republican-dominated states to enact 33 laws suppressing the votes of likely Democratic voters, on the false pretext of eliminating "voter fraud" that doesn't exist. Several off these hese state laws will also let Republican legislatures ignore future electoral results they dislike. Under the same pretext, Republican states have undertaken bogus "audits" of the 2020 election.

But for a brief time it seemed as if senior Republicans in Washington would try to move the party away from Trump. They now appear to have given up. Several who in January criticized him for provoking the Capitol insurrection are now defending him and minimizing the attempted coup - including, notably, Senator Chuck Grassley, who showed up at Saturday's Des Moines rally, and former vice president Michael Pence, who is now minimizing and excusing the riot.

For Trump to make the midterm elections into a referendum on himself and his Big Lie is useful for the Democrats. It takes the focus off Biden, reminds Americans how vile the former president is, and forces Republicans to try to defend him. If you watched Fox News Sunday, you might have seen Chris Wallace repeatedly ask House Minority Whip Steve Scalise whether he thought the 2020 election was stolen, and Scalise repeatedly squirm to avoid answering the question -- prompting this tweet from Liz Cheney, Wyoming's Republican Representative and Vice Chair of the January 6 Select Committee (and one of the last remaining Republican lawmakers with any integrity):

Related Topic(s): Politics; Trump Against Democracy; Trump Crime; Trump Ego; Trump Liar; Trump Rally, Add Tags
Add to My Group(s)
Go To Commenting
The views expressed herein are the sole responsibility of the author and do not necessarily reflect those of this website or its editors.