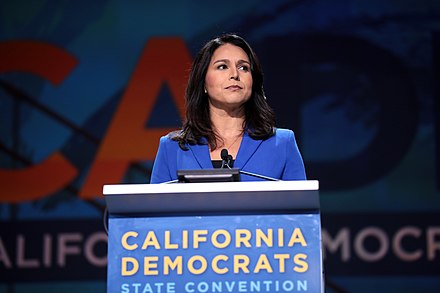 The Moscow Circus is back in town for an extended engagement. Democratic Party neo-liberals have abandoned the concept of debating one another to produce the most popular candidate for voters and instead have devolved into an endless stream of slander and evidence-free conspiracy theories about alleged ties to Russia. Hillary Clinton's recent remarks smearing Hawaii Representative Tulsi Gabbard, and also 2016 Green Party candidate Jill Stein, have epitomized this "Neo-McCarthyism," a strategy based on a Big Liethat the Russian government is somehow backing one's political opponents. No proof is required: not against Representative Gabbard, not against anyone. Clinton's audience is pre-conditioned, over several years of anti-Russian propaganda, to simply believe these kinds of baseless claims.

The political environment has been poisoned since Clinton blamed a hypothetical Russian plot for her loss, rather than accepting electoral defeat with a bit of grace.

"This is an attack against our country. We are well beyond normal political concerns here. This is about the integrity of our democracy and the security of our nation."

Her own campaign had already been exposed for rigging the 2016 Democratic Party primary in her favor against Bernie Sanders, glaringly anti-democratic. The exposure of Clinton's "secret takeover" of the DNC prompted Tulsi Gabbard to resign from that organization and speak out against it. Hillary Clinton's 2016 money-laundering scheme may have skirted campaign finance laws to the tune of $84 million .

The beauty and convenience of blaming Russia for all ills is that Russia remains an official enemy, a perpetual bad guy in a black hat,who can do nothing right. In the "Russian troll" myth, all Russians are the government of Russia, or simply "Putin," despite no evidence ever having been produced to substantiate this assumption. We know that a "troll farm" called the Internet Research Agency is located inside Russia, and this is in fact a private company of spammers churning out cheap garbage on a wide variety of topics. A journalist might ask the reasonable question of why the Russian government would continue to use a known entity that's appeared across Western news reports and is even cited in US government indictments for years? Is that how covert operations actually work?

Troll farms and spam bots are in no way unique to Russia, either. Troll farms are in China , Mexico , Israel and anywhere else people spend some money on computers and cheap labor to produce social media junk. You could build a nefarious "troll farm" in your garage tonight if you wanted to. There is no barrier to entry. A "bot" is just a simple computer program to send out the junk, but which is now elevated to mythic status when the word "Russian" precedes it.