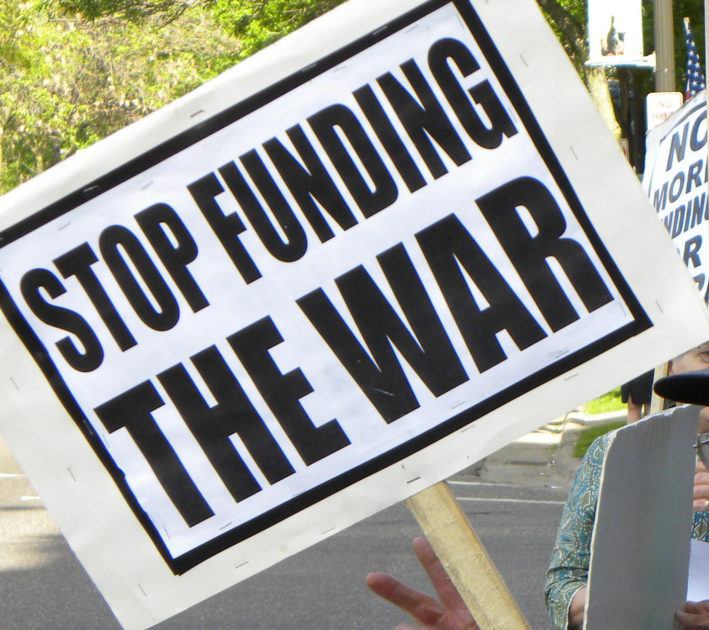 It removes some racist symbols in the military, but preserves Trump's ability to use the military against anti-racist demonstrators.

It abdicates Congress' responsibility to declare war, but prevents the executive branch from moving toward peace.

It was passed by elected officials, but gives a single general the ability to overrule an elected branch of government.

It requires officials to state definitively that removing troops won't harm security interests, but not to say whether keeping them there will -- despite the destabilizing and destructive impact of our troop presence to date in the Middle East.

It is supported by deficit hawks, but would result in 50 percent higher military spending than the last Cold War budget.

The Military and Racism

The Committee's version of the National Defense Authorization Act (NDAA) requires the removal of Confederate names and flags from military bases. That is an unequivocally good and important thing. Most Americans now understand that the Confederacy was a brief and violent insurrection against lawful authority, conducted solely to help a few wealthy people keep holding other people in brutal bondage. Forcing Black servicemembers and civilians to live and work in the presence of these names and symbols was an extension of slavery culture.

But a number of House Democrats joined with Republicans to block restrictions on Trump's ability (or a future president's) to use the military against peaceful protestors, as Trump threatened to do against Black Lives Matter protesters in early June of this year. Another Republican, Sen. Tom Cotton (considered a potential presidential candidate) tweeted:

Related Topic(s): Generals; House Appropriations Committee; House Foreign Affairs Committee; House Of Represenatives; Military Deployment; Military In Politics; Military Spending, Add Tags
Add to My Group(s)
Go To Commenting
The views expressed herein are the sole responsibility of the author and do not necessarily reflect those of this website or its editors.