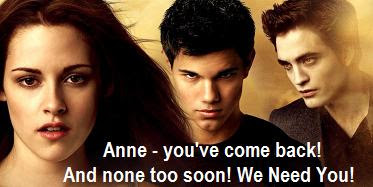 The infamous author of The Vampire Chronicles, Anne Rice, has tried Christianity and found it wanting.

"...following Christ does not mean following His followers. Christ is infinitely more important than Christianity and always will be, no matter what Christianity is, has been or might become."

Indeed, Many of Rice's followers wondered when - or if - she would eventually come to reason.

It is a testament of true spirituality that Anne Rice, the woman who almost singlehandedly rescued the occult/horror genre from the clutches of the Moral Majority, has decided that today's form of American Christianity is not for her. As the above quote points out, placement of Christ and His teachings ABOVE today's Perkins-Warren-Engle version of Christianity is what really matters.

It's simply impossible for me to "belong' to this quarrelsome, hostile, disputatious, and deservedly infamous group. For ten years, I've tried. I've failed. I'm an outsider. My conscience will allow nothing else."

It's obvious that the recent gay-bashing and Obama-hating by the Christian Right helped Rice in her decision, but it's also interesting that the tipping point may have come with the ex-communication of Sister Margaret McBride, a nun and hospital administrator who had approved an abortion for a woman whose life was in danger. Within the last several years, the "anti's" kept piling up: anti-gay, anti-feminist, anti-science,even anti-Democrat. And while the Christian Right constantly commits to being "pro-life," their real stance - devoid of compassion regarding a woman's life - was beyond the pale. 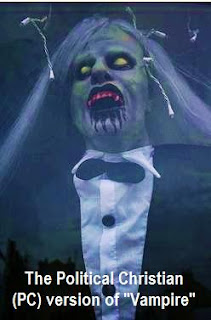 I met Anne Rice just after The Vampire Lestat came out (and before her S&M fantasies - The Claiming of Sleeping Beauty, etc. - were known). Back then she and her husband, the poet Stan Rice, lived in San Francisco's gay Castro District and she frequented Walt Whitman Books. Once, we had the LONGEST telephone conversation about gay S&M versus straight S&M. I thought that hers was the most voracious intellect about the physical as well as the metaphysical. The death of her first child (6-year-old Michelle) led to a deep depression that was quelled by writing her own version of the vampire saga, transmogrifying the conventional (hence, very immoral) evil of Dracula into the anti-hero Lestat.

The Christian Right never forgave her.

Rice's concepts of good and evil transcended the black and white versions from the pulpit. Her characters paved the way for the series, Twilight, which Ralph Reed's Christian Coalition is now trying to ban:

Rev. Dan Vojir is has been writing/blogging on religion and politics for the better part of ten years. A former radio talk show host (Strictly Books " Talk America Radio Network) and book publisher, Dan has connected with some of the most (more...)
Related Topic(s): Anne Rice; Anti-gay; Christianity; Family Research Council; People Ghandi; People Ralph Reed; Religious Right; Rick Warren; Spirituality; Twilight; (more...) Vampires; Vampires, Add Tags  (less...)
Add to My Group(s)
Go To Commenting
The views expressed herein are the sole responsibility of the author and do not necessarily reflect those of this website or its editors.