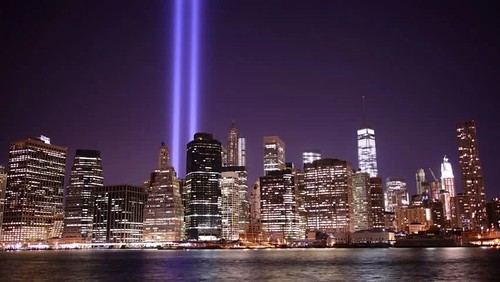 We're beginning to get the picture. Beginning to act like rats about to abandon the Titanic. The American Experiment, the USS Exception is taking on heavy water. The band is singing, the fat lady's all Ella Fitzgerald, breaking Memorex tapes in the dressing room, waiting for the quiet nod from the Man in the Long Black Coat before going on stage to sing our final aria. Scat humankind scooby dooby doo, doo-what" And we break.

We should have been more scared shitless when J. Robert Oppenheimer, "father of the atomic bomb," pulled a quote from the Gita after the explosion of the first atomic bomb, "Now I am become Death, the destroyer of worlds." But then Edward Teller came along and became the "father of the hydrogen bomb," in a kind of bizarre schlong one upmanship -- the Amazon logo-like H-bomb was detonated by the puny A-bomb. We nicknamed our bombs Little Boy and Fat Man, loaded up the Enola Gay in an era that featured sexy full-breasted women painted on the bomber. And as if that weren't bad enough, we gave other nations, who did not share our values or self-esteem ideas -- India got around to developing a nuke and named it The Smiling Buddha; positive nihilism was never so much fun. Boom! Get it?

Now 75 years later, world cankerers that we are, we seem anxious to get the hell off the planet before it becomes Hell. A few years back, when slingshot wunderkind Elon Musk asked for volunteers for a one-way trip to Mars in one of his tin cans, why some 200,000 desperadoes put up their hands to end it all off-planet. Now, there's word that the Chinese want to build a base on the moon. Jeff Bezos has plans for putting up a cul de sac bedroom community in near-exo-ether, complete with Amazon deliveries. (You think those pickers and packers are overworked now.) I interviewed an ex-NASA contractor guy, Al Globus, a few weeks ago who swore it could all be done, once we get past the space debris, and colonies over the equator are a slam dunk (well, unless we forget to "boost" the colony once in a while). Let's hope his blueprints are more exciting than his prose.

Last week all the world was inundated yet again with news that we may be getting visitors from outer space (let's call them aliens; it's so un-PC). Newspapers and magazines of record for the various tiers of the middle class put out essentially the same story -- dumbed down or ponceyed up, depending on your student loan status. The lower middle class read in the Telegraph, "The Pentagon thinks UFOs may exist after all... and the evidence is growing." The middle middle Guardian gave us, "I've seen the saucers: Obama weighs in as US interest in UFOs rises." And New Yorker magazine, home of 'the best writing in the world' (no pants on fire there), and tailored for those with paid-for, bespoke, nuanced educations, dished up "How the Pentagon Started Taking U.F.O.s Seriously."

The Telegraph featured the account of a pilot, Lieutenant Commander Alex Dietrich, who back in November 2004 claims she witnessed alien tomfoolery while aboard the USS Nimitz carrier off the coast of San Diego. She described the UFOs (to be called "unidentified aerial phenomena" or UAPs, now that authorities have given the nod) as Tic Tacs -- you know, breath neutralizers. So maybe we're dealing maltodextrins, the evil little shits that claim they bring no sugar to the table, even though they're 90% and leave, after the spearmint has worn off, leave your breath worse off, leading to another Tic Tac and another until you gots diabetes. And bad breath.

The Telegraph was marketing to gullibles from the upper poors and lower middles. When Dietrich appeared on CBS: 60 Minutes recently, looking all the world like a gorgeous female version of Tom Cruise in Top Gun, she could have sold me Tupperware™. My labia were sealed. But then she began to defer to some male schmuck next to her, that she was clearly, too good for, and I lost my desire to suspend my disbelief. And Tupperware lost a customer.

The Guardian, on the other hand, went for Obama says it's twoo, it's twoo. The headline appears to suggest he actually saw UFOs (oops, I mean, UAPs), but the article merely relates that he's seen intel to the effect that... and closes by saying, "I have nothing to report to you today." It was the maltodextrins that gave Obama that hopey dopey strut (and probably supplied his birth certificate, wink). And now a word from Mr. Drones: The community organizer weighs in. Big whoopty doos.

But seriously, who cares what he thinks? So, inexplicably, he remains a likeable brand name, raking in the tidy sum of $400,000 every time he chats with a Wall Street firm (who wouldn't strut?). The same fucks he bailed out in 2008 with tax-payer money and then punted his domestic agenda on second down. Makes you think he probably knew he'd have to bail out the sociopathic bankers "too big to fail" beforehand. Anyway, maybe this sub-editor should move to a Murdoch paper now. Perhaps the well-received Sun. See below:

If you ask me, that's how we should be treating most of the MSM's burnt offerings these days. F*ck 'em.

And the New Yorker is another one. Sure, a lot of it's great writing, and I can solve their cryptic puzzle in 15 minutes on a good day, which makes me feel elited. But now, they're decided to weigh in favorably on the Pentagon's change of heart and 'truth' regarding UFOs (oops, UAPs). The long form piece (natch), "How the Pentagon Started Taking U.F.O.s Seriously," by Gideon Lewis-Kraus, relies heavily on the views and assertions of Leslie Kean, an investigative journalist and UFO and paranormal aficionado, and is written in a kind of arch ironical style that is even better than what I'm writing here. (Editors, right?)

Related Topic(s): Evidence; Hollywood; Military; Money; Obama; Pandemic; Paranormal; Pentagon; Rant; Roast; (more...) Time; Trump; Whistleblower, Add Tags  (less...)
Add to My Group(s)
Go To Commenting
The views expressed herein are the sole responsibility of the author and do not necessarily reflect those of this website or its editors.