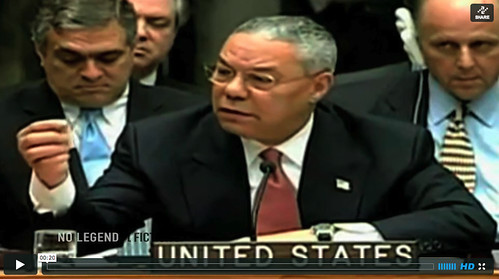 Sixteen years after the U.S. invasion of Iraq, most Americans understand that it was an illegal war based on lies about non-existent "weapons of mass destruction." But our government is now threatening to drag us into a war on Iran with a nearly identical "big lie" about a non-existent nuclear weapons program, based on politicized intelligence from the same CIA teams that wove a web of lies to justify the U.S. invasion of Iraq in 2003.

In 2002-3, U.S. officials and corporate media pundits repeated again and again that Iraq had an arsenal of weapons of mass destruction that posed a dire threat to the world. The CIA produced reams of false intelligence to support the march to war, and cherry-picked the most deceptively persuasive narratives for Secretary of State Colin Powell to present to the UN Security Council on February 5th 2003. In December 2002, Alan Foley, the head of the CIA's Weapons Intelligence, Nonproliferation and Arms Control Center (WINPAC), told his staff, "If the president wants to go to war, our job is to find the intelligence to allow him to do so."

Paul Pillar, a CIA officer who was the National Intelligence Officer for the Near East and South Asia, helped to prepare a 25-page document that was passed off to Members of Congress as a "summary" of a National Intelligence Estimate (NIE) on Iraq. But the document was written months before the NIE it claimed to summarize and contained fantastic claims that were nowhere to be found in the NIE, such as that the CIA knew of 550 specific sites in Iraq where chemical and biological weapons were stored. Most Members read only this fake summary, not the real NIE, and blindly voted for war. As Pillar later confessed to PBS's Frontline, "The purpose was to strengthen the case for going to war with the American public. Is it proper for the intelligence community to publish papers for that purpose? I don't think so, and I regret having had a role in it."

WINPAC was set up in 2001 to replace the CIA's Nonproliferation Center or NPC (1991-2001), where a staff of 100 CIA analysts collected possible evidence of nuclear, chemical and biological weapons development to support U.S. information warfare, sanctions and ultimately regime change policies against Iraq, Iran, North Korea, Libya and other U.S. enemies.

WINPAC uses the U.S.'s satellite, electronic surveillance and international spy networks to generate material to feed to UN agencies like UNSCOM, UNMOVIC, the Organization for the Prohibition of Chemical Weapons (OPCW) and the International Atomic Energy Agency (IAEA), who are charged with overseeing the non-proliferation of nuclear, chemical and biological weapons. The CIA's material has kept these agencies' inspectors and analysts busy with an endless stream of documents, satellite imagery and claims by exiles for almost 30 years. But since Iraq destroyed all its banned weapons in 1991, they have found no confirming evidence that either Iraq or Iran has taken steps to acquire nuclear, chemical or biological weapons.

UNMOVIC and the IAEA told the UN Security Council in 2002-3 they could find no evidence to support U.S. allegations of illegal weapons development in Iraq. IAEA Director General Mohamed ElBaradei exposed the CIA's Niger yellowcake document as a forgery in a matter of hours. ElBaradei's commitment to the independence and impartiality of his agency won the respect of the world, and he and his agency were jointly awarded the Nobel Peace Prize in 2005.

Apart from outright forgeries and deliberately fabricated evidence from exile groups like Ahmad Chalabi's Iraqi National Congress (INC) and the Iranian Mojahedin-e Khalq (MEK), most of the material the CIA and its allies have provided to UN agencies has involved dual-use technology, which could be used in banned weapons programs but also has alternative legitimate uses. A great deal of the IAEA's work in Iran has been to verify that each of these items has in fact been used for peaceful purposes or conventional weapons development rather than in a nuclear weapons program. But as in Iraq, the accumulation of inconclusive, unsubstantiated evidence of a possible nuclear weapons program has served as a valuable political weapon to convince the media and the public that there must be something solid behind all the smoke and mirrors.

For instance, in 1990, the CIA began intercepting Telex messages from Sharif University in Tehran and Iran's Physics Research Centre about orders for ring magnets, fluoride and fluoride-handling equipment, a balancing machine, a mass spectrometer and vacuum equipment, all of which can be used in uranium enrichment. For the next 17 years, the CIA's NPC and WINPAC regarded these Telexes as some of their strongest evidence of a secret nuclear weapons program in Iran, and they were cited as such by senior U.S. officials. It was not until 2007-8 that the Iranian government finally tracked down all these items at Sharif University, and the IAEA inspectors were able to visit the university and confirm that they were being used for academic research and teaching, as Iran had told them.

After the U.S. invasion of Iraq in 2003, the IAEA's work in Iran continued, but every lead provided by the CIA and its allies proved to be either fabricated, innocent or inconclusive. In 2007, U.S. intelligence agencies published a new National Intelligence Estimate (NIE) on Iran in which they acknowledged that Iran had no active nuclear weapons program. The publication of the 2007 NIE was an important step in averting a U.S. war on Iran. As George W Bush wrote in his memoirs, "...after the NIE, how could I possibly explain using the military to destroy the nuclear facilities of a country the intelligence community said had no active nuclear weapons program?"

But despite the lack of confirming evidence, the CIA refused to alter the "assessment" from its 2001 and 2005 NIEs that Iran probably did have a nuclear weapons program prior to 2003. This left the door open for the continued use of WMD allegations, inspections and sanctions as potent political weapons in the U.S.'s regime change policy toward Iran.

In 2007, UNMOVIC published a Compendium or final report on the lessons learned from the debacle in Iraq. One key lesson was that, "Complete independence is a prerequisite for a UN inspection agency," so that the inspection process would not be used, "either to support other agendas or to keep the inspected party in a permanent state of weakness." Another key lesson was that, "Proving the negative is a recipe for enduring difficulties and unending inspections."

The 2005 Robb-Silberman Commission on the U.S. intelligence failure in Iraq reached very similar conclusions, such as that, ""analysts effectively shifted the burden of proof, requiring proof that Iraq did not have active WMD programs rather than requiring affirmative proof of their existence. While the U.S. policy position was that Iraq bore the responsibility to prove that it did not have banned weapons programs, the Intelligence Community's burden of proof should have been more objective... By raising the evidentiary burden so high, analysts artificially skewed the analytical process toward confirmation of their original hypothesis - that Iraq had active WMD programs."

In its work on Iran, the CIA has carried on the flawed analysis and processes identified by the UNMOVIC Compendium and the Robb-Silberman report on Iraq. The pressure to produce politicized intelligence that supports U.S. policy positions persists because that is the corrupt role that U.S. intelligence agencies play in U.S. policy, spying on other governments, staging coups, destabilizingcountries and producing politicized and fabricated intelligence to create pretexts for war.

A legitimate national intelligence agency would provide objective intelligence analysis that policy-makers could use as a basis for rational policy decisions. But, as the UNMOVIC Compendium implied, the U.S. government is unscrupulous in abusing the concept of intelligence and the authority of international institutions like the IAEA to "support other agendas," notably its desire for regime change in countries around the world.

The U.S.'s "other agenda" on Iran gained a valuable ally when Mohamed ElBaradei retired from the IAEA in 2009, and was replaced by Yukiya Amano from Japan. A State Department cable from July 10th 2009 released by Wikileaks described Mr. Amano as a "strong partner" to the U.S. based on "the very high degree of convergence between his priorities and our own agenda at the IAEA." The memo suggested that the U.S. should try to "shape Amano's thinking before his agenda collides with the IAEA Secretariat bureaucracy." The memo's author was Geoffrey Pyatt, who later achieved international notoriety as the U.S. Ambassador to Ukraine who was exposed on a leaked audio recording plotting the 2014 coup in Ukraine with Assistant Secretary of State Victoria Nuland.

The Obama administration spent its first term pursuing a failed "dual-track" approach to Iran, in which its diplomacy was undermined by the greater priority it gave to its parallel track of escalating UN sanctions. When Brazil and Turkey presented Iran with the framework of a nuclear deal that the U.S. had proposed, Iran readily agreed to it. But the U.S. rejected what had begun as a U.S. proposal because, by that point, it would have undercut its efforts to persuade the UN Security Council to impose harsher sanctions on Iran.

Nicolas J S Davies is a freelance writer, a researcher for CODEPINK and the author of  Blood On Our Hands : the American Invasion and Destruction of Iraq. He also wrote the chapters on "Obama at War" in Grading the 44th (more...)

Related Topic(s): Bush; CIA; Iaea; Intelligence; Iran; Iran Nuclear Talks; Iraq; Iraq_Veterans_Against_The_War, Add Tags
Add to My Group(s)
Go To Commenting
The views expressed herein are the sole responsibility of the author and do not necessarily reflect those of this website or its editors.

The U.S. Is Recycling Its Big Lie About Iraq To Target Iran

The Madness of the Resurgent US Cold War With Russia