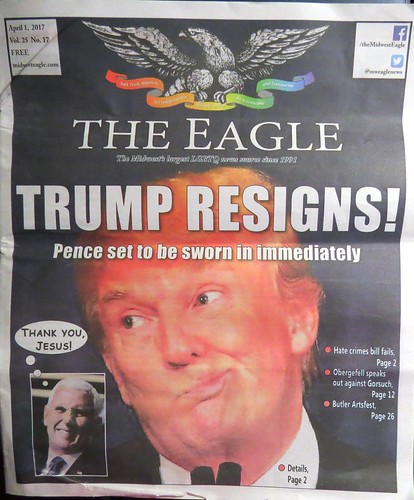 Fake News or not?
(Image by kennethkonica)   Details   DMCA

Harvard Law professor Larry Tribe, the leading Constitutional scholar and practitioner of his era, has told Congress to "grow a pair" and impeach Trump. Tribe had already initiated litigation against Trump under the Foreign Emoluments Clause for his conflicts of interest involving foreign countries and their potential for filling what Tribe calls Trump's "bottomless money pit." Tribe now invokes as the occasion for Congress to take immediate action the new evidence that Trump himself revealed about the apparent attempted bribery and obstruction of justice involved in his brief, and now terminated, relationship with former FBI Director James Comey.

Tribe is not the first law professor to find Trump impeachable. But Tribe makes clear that this latest problem goes beyond mere conflicts of interest, which is what the Emoluments Clause prohibits. It goes all the way to actual bribery, done much in the manner of a mobster . Trump's own words suggest that he may have dangled the FBI directorship before Comey in exchange for Comey's assurance that Trump was (and would remain?) excluded from the Russian investigation plus Comey's swearing of general fealty to Trump rather than, as his oath requires, to the Constitution's rule of law. Comey's continued employment as FBI director was an implicit quid pro quo. The deal implied by Trump's own words, amplified by leaks from Comey, was: "You obey my will and I will keep you employed as my pet FBI Director."

Trump admits discussing such an implied offer with Comey three times. He put a gratuitous sentence in his May 9 firing letter to Comey memorializing the conversations, possibly lying in his assertion that Comey had agreed to the deal by informing Trump he is not under investigation. Trump's later tweeted threat to Comey that the conversations may have been recorded, on the other hand, suggests that Comey did not exactly decline the bribe, even if Trump did change his mind and fire him anyway. This threat itself might also constitute obstruction of justice.

Racketeering under the federal RICO law is committed by two or more instances of "any act or threat involving ... bribery," among other named crimes. That law specifically covers bribery of a public official "to do or omit to do any act in violation of the lawful duty of such official." This single incident could therefore expose the whole Trump enterprise to investigation and discovery of other similar racketeering. Other "predicate acts" by Trump involving racketeering crimes such as bribery or extortion could include the kinds of activities involved in Tribe's Emoluments Clause litigation. Comey himself might plausibly join a Civil RICO suit as a "person injured in his business" by the Trump enterprise. It would not be Trump's first brush with racketeering charges .

Trump's conversations with Comey that amounted to a bribe, Tribe argues , also constitute an impeachable "high crime or misdemeanor" of greater significance than the speculation about Russian collusion with Trump's 2016 campaign. Indeed it is important to separate the significance of Trump's attempted influence on Comey from both the dubious merits of the " Russian Hacking Fiasco " -- for which no credible evidence has yet been made public -- and also from the considerable merits of firing James Comey.

Rob Hager is a public-interest litigator who filed a Supreme Court amicus brief n the 2012 Montana sequel to the Citizens United case, American Tradition Partnership, Inc. v. Bullock, and has worked as an international consultant on legal (more...)
Related Topic(s): Donald Trump Lies; Impeachment; Trump Idiot-in-chief; Trump Mental State, Add Tags
Add to My Group(s)
Go To Commenting
The views expressed herein are the sole responsibility of the author and do not necessarily reflect those of this website or its editors.