The GOP lackeys are eager to do the bidding of whichever oligarch will give them the most money. 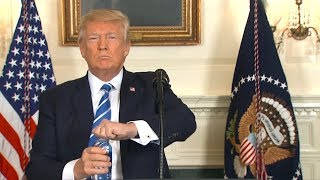 A few years back, former President Jimmy Carter told me that, because of Citizens United and its predecessors (like the Buckley decision in 1976), we're no longer a democracy, but instead, "an oligarchy, with unlimited political bribery."

For proof that Carter was right, one need look no further than Mike Pompeo taking Rex Tillerson's job, stepping into Thomas Jefferson's shoes as Secretary of State.

While Pompeo has an impressive resume on paper, something endlessly mentioned on cable news and other corporate media, the one skill-set that has truly enabled his rise to power, first in Congress and now in the Executive Branch, is his fine-tuned ability to suck up to #MorbidlyRich billionaires.

Prior to Trump arriving, Pompeo was one of Congress's single largest beneficiaries of money from the Koch brothers and groups associated with them. Forget Pompeo's army service and Harvard law degree; you don't get to be the favorite son of the morbidly rich if you don't know how to suck up to them.

Billionaire Trump, like so many others of America's billionaire oligarchs, doesn't take kindly to people who have their own minds. He wants fealty and sycophancy, not brilliance or competence.

For example, Rex Tillerson, actually looking at facts and political realities, made the mistake of pointing out to Trump that tearing up the Iran no-nukes deal at the same time you're trying to negotiate a brand-new no-nukes deal with North Korea was contradictory messaging. What country, after all, would want to cut a deal with a partner who kills agreements unilaterally without contractual justification?

Tillerson, of course, was right. But he wasn't sucking up to Trump in the way the oligarch wanted (and apparently, needed). Tillerson even occasionally put our nation's security ahead of his subservience to Trump. Big mistake.

Many members of today's billionaire class think of themselves as "self-made," and so have a sneering disregard for the working people of America who "merely" aspire to the American Dream of being in the middle class with a safe job, good benefits, and a secure retirement. These oligarchs are more concerned with their profits than with the impact of their products or services on our country.

And they only want people around them who share their vision of their own greatness; who, in other words, are pathetic suck-ups. Pompeo has developed this to an art form.

After years of sucking at the Koch teat, Pompeo apparently realized that Trump, too, wanted only to surround himself with people who eagerly agreed with him. Probably Trump is even needier than the Kochs, and so would only elevate people who tell him daily how brilliant and strong and noble he is.

Thus, Pompeo apparently saw a career opportunity to ingratiate himself with another billionaire oligarch.

To make it happen, Pompeo changed the normal daily routine by which the president is briefed by the CIA. Instead of it being done with clear, cold precision by a career intelligence officer, henceforth, Pompeo decreed, the Director of the CIA himself (Pompeo) would take hours out of his day to make the daily trek to the White House to hang out with Trump and give him a pleasant daily tongue-bath.

Related Topic(s): Billionaires; Corporations; Government Crime; Trump Bully In Chief; Trump Cabinet, Add Tags
Add to My Group(s)
Go To Commenting
The views expressed herein are the sole responsibility of the author and do not necessarily reflect those of this website or its editors.