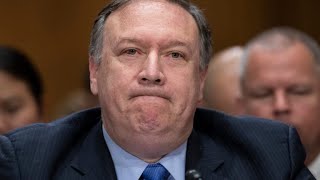 Yesterday (April 17) I heard a NPR "news" report that described the democratically elected president of Venezuela as "the Venezuelan dictator Maduro." By repeating over and over that a democratically elected president is a dictator, the presstitutes create that image of Maduro in the minds of vast numbers of peoples who know nothing about Venezuela and had never heard of Maduro until he is dropped on them as "dictator."

Nicolas Maduro Moros was elected president of Venezuela in 2013 and again in 2018. Previously he served as vice president and foreign minister, and he was elected to the National Assembly in 2000. Despite Washington's propaganda campaign against him and Washington's attempt to instigate violent street protests and Maduro's overthrow by the Venezuelan military, whose leaders have been offered large sums of money, Maduro has the overwhelming support of the people, and the military has not moved against him.

What is going on is that American oil companies want to recover their control over the revenue streams from Venezuela's vast oil reserves. Under the Bolivarian Revolution of Chavez, continued by Maduro, the oil revenues instead of departing the country have been used to reduce poverty and raise literacy inside Venezuela.

The opposition to Maduro inside Venezuela comes from the elites who have been traditionally allied with Washington in the looting of the country. These corrupt elites, with the CIA's help, temporarily overthrew Chavez, but the people and the Venezuelan military secured his release and return to the presidency.

Washington has a long record of refusing to accept any reformist governments in Latin America. Reformers get in the way of North America's exploitation of Latin American countries and are overthrown.

With the exceptions of Venezuela, Bolivia, Cuba, and Nicaragua, Latin America consists of Washington's vassal states. In recent years Washington destroyed reform governments in Honduras, Argentina and Brazil and put gangsters in charge.

According to US national security adviser John Bolton, a neoconservative war monger, the governments in Venezuela, Cuba, and Nicaragua will soon be overthrown. New sanctions have now been placed on the three countries. Washington in the typical display of its pettiness targeted sanctions against the son of the Nicaraguan president Daniel Ortega.

Ortega has been the leader of Nicaragua since for 40 years. He was president 1985-1990 and has been elected and reelected as president since 2006.

Ortega was the opponent of Somoza, Washington's dictator in Nicaragua. Consequently he and his movement were attacked by the neoconservative operation known as Iran-Contra during the Reagan years. Ortega was a reformer. His government focused on literacy, land reform, and nationalization, which was at the expense of the wealthy ruling class. He was labeled a "Marxist-Leninist," and Washington attempted to discredit his reforms as controversial leftist policies.

Somehow Castro and Ortega survived Washington's plots against them. By the skin of his teeth so did Chavez unless you believe it was the CIA that gave him cancer. Castro and Chavez are dead. Ortega is 74. Maduro is in trouble, because Washington has stolen Venezuela's bank deposits and cut Venezuela off the international financial system, and the British have stolen Venezuela's gold. This makes it hard for Venezuela to pay its debts.

The Trump regime has branded the democratically twice-elected Maduro an "illegitimate" president. Washington has found a willing puppet, Juan Guaido to take Maduro's place and has announced that the puppet is now the president of Venezuela. No one among the Western presstitutes or among the vassals of Washington's empire finds it strange that an elected president is illegitimate but one picked by Washington is not.

Russia and China have given Maduro diplomatic support. Both have substantial investments in Venezuela that would be lost if Washington seizes the country. Russia's support for Maduro was declared by Bolton today to be a provocation that is a threat to international peace and security. Bolton said his sanctions should be seen by Russia as a warning against providing any help for the Venezuelan government.

Secretary of state Mike Pompeo and vice president Pence have added their big mouths to the propaganda against the few independent governments in Latin America. Where is the shame when the highest American government officials stand up in front of the world and openly proclaim that it is official US government policy to overthrow democratically elected governments simply because those governments don't let Americans plunder their countries.

How is it possible that Pompeo can announce that the "days are numbered" of the elected president of Nicaragua, who has been elected president three or four times, and the world not see the US as a rogue state that must be isolated and shunned? How can Pompeo describe Washington's overthrow of an elected government as "setting the Nicaraguan people free?"

Related Topic(s): Government; International; Literacy; Sanctions; Shame, Add Tags
Add to My Group(s)
Go To Commenting
The views expressed herein are the sole responsibility of the author and do not necessarily reflect those of this website or its editors.