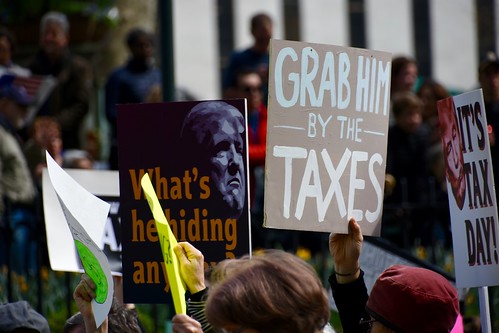 Grab Him By The Taxes
(Image by alecperkins)   Details   DMCA

There has been much attention to the plan put forward by Republicans in Congress to cut individual and corporate income taxes. According to analysis done by independent sources, close to 80 percent of these cuts will go to the richest one percent of the population.

While this may seem unfair and unwarranted in an economy where the rich have seen the overwhelming majority of the gains from growth in the last four decades, we have been told not to worry because the boost to growth will make everyone winners. The average family has been promised an income gain of $4,000 a year and possibly as much as $9,000.

It is possible to construct economic theories where corporate tax cuts do produce large gains, but these theories clearly do not describe the world we live in. For example back in the mid-1980s, the U.S. lowered the corporate tax rate from 46 percent to 35 percent. Rather than producing an investment boom, the late 1980s were the weakest non-recession period for investment in the post-World War II era.

The idea that investment is highly responsive to the after-tax rate of profit stands history on its head. The strongest period of investment in the last seven decades was the late 1970s when the profit rate was at its post-war low. By contrast, the near record profit rates seen in this recovery have coincided with mediocre levels of investment. It's difficult to believe that if we raised the rate of profit even further by cutting taxes, investment would somehow boom.

But this is the scam everyone knows. There is another potentially far more pernicious scam currently in process. Any tax cut will have to go through Congress with representatives and senators having to cast a vote that in principle they can be held accountable for. The other scam requires no vote; it is about Donald Trump appointing a crony tax avoider as temporary head of the Internal Revenue Service.

Last week, the Trump administration announced that it intends to make David Kautter as acting commissioner of the IRS on November 12th, when the current director's term ends. The IRS's job is enforcing the tax code. Traditionally, IRS directors picked by presidents of both parties have had experience at the I.R.S., which would give them the necessary expertise to lead the agency.

Kauter has zero experience at the IRS and in tax enforcement. Instead, his experience is as the director of "National Tax" at E&Y, the huge accounting firm formerly known as Ernest & Young. Kauter's work there was in developing tax avoidance schemes, minimizing clients' tax liability. This division of E&Y was so vigilant at its efforts in avoiding taxes that it eventually had to pay $123 million to the government in order to avoid criminal prosecution.

This selection should concern people for a number of reasons. First, President Trump has claimed that his tax returns are being audited. If this is true, he is in effect being allowed to pick his own auditor, with no congressional oversight. Trump has virtually made a sport of flaunting the conflict of interest laws and norms that have governed the behavior of past presidents, but this is getting sufficiently extreme that it should even bother some Republicans.

Apart from Trump personally there is also the question of how prominent Republican donors will be treated by the acting IRS commissioner. One donor in particular stands out in this respect. The ultra-conservative billionaire, Robert Mercer, is in a dispute with the IRS potentially involving more than $7 billion in back taxes and penalties, stemming from the tax treatment of his hedge fund Renaissance Technologies LLC. Favorable treatment from Kauter can mean a huge windfall for Mr. Mercer, much of which is likely to come back to the Republican party in future contributions.

Mercer's case might be an extreme one, but there is a real risk that many other politically connected rich people will be allowed to avoid much or all of their tax liability. For the rich, paying taxes could become a voluntary contribution to the government rather than something they are required to do under threat of punishment.

That is a really huge deal. We can apply any tax rate we want to the rich, but it doesn't matter if no one is enforcing it. And that it is a real risk we face with allowing the Kauter appointment to go through.

There is no reason that Trump can't do what other presidents have done, nominate a commissioner and have them go through the Senate approval process. The alternative is to make a joke of the tax code at the expense of the people who can't afford expensive tax lawyers. This is a case of really swamping the drain, big-time.

Dr. Dean Baker is a macroeconomist and Co-Director of the Center for Economic and Policy Research in Washington, D.C. He previously worked as a senior economist at the Economic Policy Institute and an assistant professor at Bucknell University. (more...)
Related Topic(s): IRS; President Trump; Republican; Scam Artist; Taxes, Add Tags
Add to My Group(s)
Go To Commenting
The views expressed herein are the sole responsibility of the author and do not necessarily reflect those of this website or its editors.