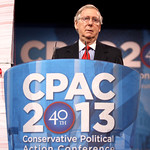 I read that HR1, the crucial Voting Rights Reform Bill passed by the House of Representatives, is dead on arrival in the Senate. Mitch McConnell, the majority leader, refuses to bring up the bill for a vote - not that we expect that reactionary body to pass their version of the bill or both houses of Congress to over-ride the president's veto.

Most troubling are the actions of McConnell, reminding us of another crucial situation when he refused to bring up for approval President Obama's nominee, Merrick Garland, for the Supreme Court. In the present case, one person, exercising his privilege based upon the internal rules of organization of the senate, and placing loyalty to his party before his responsibilities to the American people, has aborted the essential power and duty granted by our constitution for congress to pass laws for the benefit of all the people. In the Garland case, McConnell clearly defied the constitutional powers of the president to appoint justices. Since when do the Senate's internal rules of organization take precedence over the articles of the constitution? Those rules merely define the operating procedures of the senate, but do not grant the authority to refuse its duties under the constitution.

This obvious corruption of power is throwing a monkey wrench into the functioning of our government and demands our full and immediate attention to resolve the issue. McConnell's actions are equivalent to overturning the constitution to which he has sworn an oath of loyalty. He should be brought to justice.

Related Topic(s): Revolt; Senate Crime; Senate Legislative Failures, Add Tags
Add to My Group(s)
Go To Commenting
The views expressed herein are the sole responsibility of the author and do not necessarily reflect those of this website or its editors.